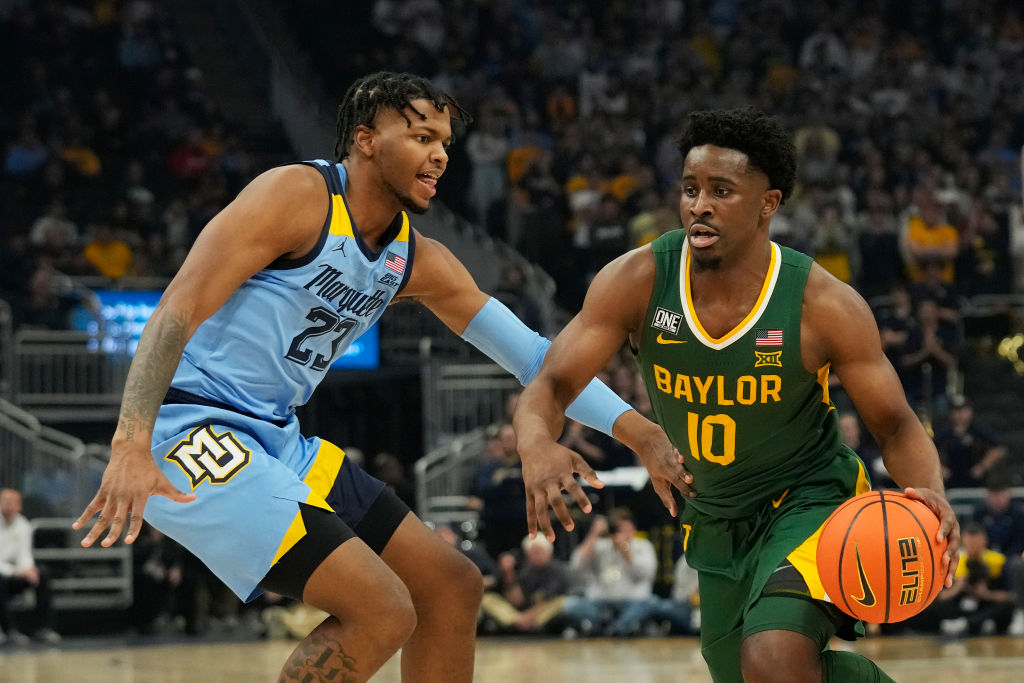 The Big East /Big 12 Battle has been in effect since 2019-20 and runs over the next week. The leagues agreed to a two-year extension running through 2023-24 and 2024-25. For the third year in a row, it ended in an even split at 5-5. With each conference adding member schools since the start of the original agreement, The Battle will increase from 10 to 11 matchups between the conferences during the two extension years. The Big 12 will host six games in 2023-24, and the Big East will host six contests in 2024-2025. The Big East and Big 12 are knotted at two apiece through Wednesday’s games.

Marquette 96, No. 6 Baylor 70: Marquette (6-2) was clicking on all cylinders against Baylor. The Golden Eagles shot 58.3 percent from the field, made 12-of-25 from beyond the arc and helped force 20 Baylor turnovers. Marquette got 63 points from the combination of Olivier-Maxence Prosper (24 points), Kam Jones (20) and David Joplin (19). The 26-point win was Marquette’s largest margin of victory over a team ranked sixth or higher by Associated Press in school history.

It's also the Bears' largest loss to an unranked team since losing by 40 to Oklahoma in Jan. 2007. pic.twitter.com/L1sNFUbpfW

TCU 75, Providence 62: Eddie Lampkin had season highs in points with 16 and rebounds with 12. He led six Horned Frogs (6-1) in double-digits as Micah Peavy cored 13 points, Chuck O’Bannon Jr. and Mike Miles Jr. both finished with 12 points and Emanuel Miller and Damion Baugh had 10. Bryce Hopkins and Devin Carter scored 17 apiece.

Peavy now has 13 points on 4-of-6 shooting from the field.


Texas Tech 79, Georgetown 65: Jaylon Tyson and De’Vion Harmon scored 18 points each and Daniel Batcho recorded his second career double-double to help lead Texas Tech. All five starters scored in double-figures with Batcho having a dominant double-double with 15 points and a career-high 13 rebounds, Kevin Obanor going for 11 points and Pop Isaacs adding 10. Butler 76, Kansas State 64: Manny Bates registered his third double-double and second 20-point game of the season with 22 points and 10 rebounds. Bates went 9-for-11 from the field and made all four of his free throw attempts. After Kansas State trimmed a 12-point Butler halftime lead to just five (48-43) with 14:07 remaining in the second half, Butler took a timeout and responded by scoring 17 of the next 19 points to extend the lead to 20 at 65-45. Another run by Kansas State cut the lead to eight with just more than four minutes remaining before Butler rebounded for the final margin.

No. 2 Texas 72, No. 67 Creighton 67: Graduate guard Marcus Carr posted a season-best 19 points in front of another sellout crowd at Moody Center. The Longhorns posted their first home win in an AP Top 10 matchup since No. 2 Texas claimed a 79-68 victory over No. 9 Michigan State on Dec. 22, 2009. This marked UT’s second win against an AP Top 10 opponent in its first six contests this season. The Longhorns earned a 93-74 home win against No. 2 Gonzaga on Nov. 16. Texas held the Bluejays to a season-low 67 points on 40.9-percent field goal shooting (27-66), including a 4-of-27 (.148) mark from three-point range. Creighton entered the game averaging 83.9 points per contest while converting 51.2-percent from the floor, including a 38.2-percent mark from three-point range. The Longhorns also registered 15 assists against just three turnovers as a team.


No. 8 Connecticut 74, Oklahoma State 64: Jordan Hawkins and Adama Sanogo combined for 46 points to lead the No. 8 Huskies (9-0) before a sold-out crowd (10,167) at Gampel Pavilion. Hawkins, who had a career-high 26 points, wasted no time getting back on track, pouring in 18 in the first half, including four 3-pointers as the Huskies broke away from a 28-25 deficit with 7:26 remaining and finished the half on a 23-3 explosion. Oklahoma State never recovered from UConn’s 48-31 halftime advantage. “I was thrilled with the way we handled the last half of the first half,” UConn Coach Dan Hurley said. “Our spurt-ability was on display – with the shooting. We were not good defensively. But it feels really good to beat a team that is an NCAA caliber team, especially after our (log) trip (from Portland).”


No. 9 Kansas 91, Seton Hall 65: Kevin McCullar Jr. returned from an injury to score 17 points and grab 10 rebounds, Jalen Wilson added 15 points and 13 board. KJ Adams had 11 points, DaJuan Harris Jr. had 10 with seven assists and Ernest Udeh Jr. also scored 10 for the Jayhawks (8-1), who now have more than a week off before visiting bitter rival Missouri for the first time in a decade next Saturday. For more on Seton Hall’s struggles, click over to NJ.com.

Villanova 70, Oklahoma 66: Caleb Daniels hit a late 3-pointer and finished with 22 points and Brandon Slater made 1-of-2 foul shots to ice the win at Wells Fargo Center as the Wildcats (3-5) snapped a four-game losing streak against Big 12 competition. Potential one-and-done freshman Cam Whitmore made his season debut and finished with 7 points and 3 rebounds in 20 minutes. “His size and athleticism really helps us, especially on the defensive end,” first-year coach Kyle Neptune told Jon Rothstein of CBS. “He hasn’t played basketball in seven weeks, so I’m shocked that he can even move out there but he did a great job.” He added: “We have a young team and our goal is to be the best team by the end of the season.”


Xavier 84, West Virginia 74:  Souley Boum and Jack Nunge combined for 40 points and 18 rebounds in the Big East-Big 12 Battle. Xavier improved to 6-3 on the year, while West Virginia dropped to 6-2. Xavier finished the game on a 14-4 run to pull away for the 10-point victory. Xavier was 2-for-3 from the floor and 9-for-12 from the foul line during the run.  The Musketeers hit 62.5 percent (15-for-24) of their second-half shot attempts to engineer the come-from-behind victory. Defensively, Xavier limited the Mountaineers to a .387 (12-for-31) field-goal percentage in the second half.

No. 23 Iowa State 71, St. John’s 58: In the final game of the battle, the Cyclones (7-1) handed the Red Storm (8-1) their first loss of the season. Jaren Holmes scored 14, Aljaz Kunc 12 and Robert Jones 11, while Caleb Grill scored 7 with 10 rebounds. Posh Alexander led St. John’s with 14, Montez Mathis scored 13 and Joel Soriano had 7 and 12 boards. Follow Adam Zagoria on Twitter Follow ZAGSBLOGHoops on Instagram And Like ZAGS on Facebook