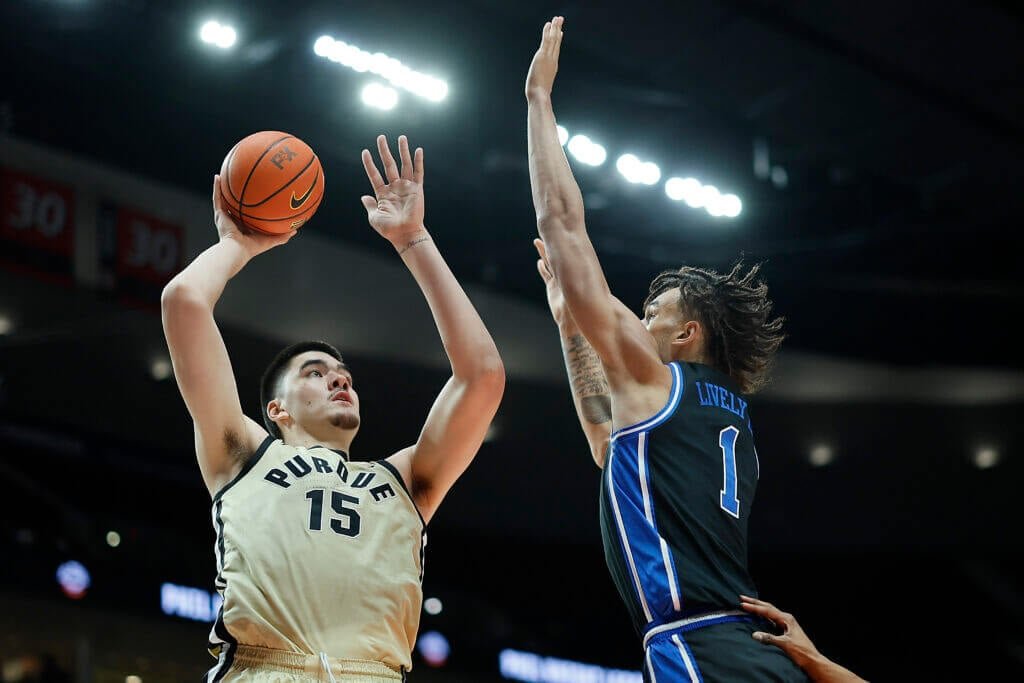 By ADAM ZAGORIA In what they are calling “The Year of the Big Man,” Purdue’s Zach Edey has been as dominant as any big man in the country so far. The 7-foot-4 native of Toronto is averaging 21.7 points and 12.0 rebounds for a Purdue team that is 6-0, ranked No. 5 in the latest AP Poll and just won the PK Legacy bracket by beating West Virginia, Gonzaga and Duke by a combined 49 points. Edey was named MVP of the Legacy bracket. “One of the things that differentiates him from other players his size is the overlap of coordination, balance and power, not to mention his interior skill,” Adam Finkelstein of 247Sports.com wrote.

In terms of his NBA future, the junior is projected as the No. 58 pick in next year’s draft by ESPN.com. I checked in with three NBA scouts to see what they thought of Edey given his performance in Portland. “Interest and polarizing guy,” one scout said. “Twenty years ago he would have been a Top 20 pick, but hard to place him in an NBA game.” Said a second scout: “He’s a 2nd-rounder, 3rd center in the NBA. His mobility is better this year.” And a third: “There’s a place in the league for him.” The sentiments surrounding Edey reflect similar feelings about many of the other dominant bigs in college basketball this year, including Oscar Tshiebwe of Kentucky (projected No. 39 pick by ESPN), Ryan Kalkbrenner of Creighton (No. 48), Drew Timme of Gonzaga (No. 50), Trayce Jackson-Davis of Indiana (No. 60), Armando Bacot of North Carolina, Hunter Dickinson of Michigan and Adama Sanogo of UConn, “As the game has changed now, and the NBA. is looking for more five-out type of skill at that position, your traditional back-to-the-basket centers now, the NBA is not calling for them and now they’re staying in college,” UConn ‌coach Dan Hurley said. “You add NIL on top of that and it feels like some of these guys have been in college forever, whereas they were gone one-and-done or maybe two years at most.” Follow Adam Zagoria on Twitter Follow ZAGSBLOGHoops on Instagram And Like ZAGS on Facebook