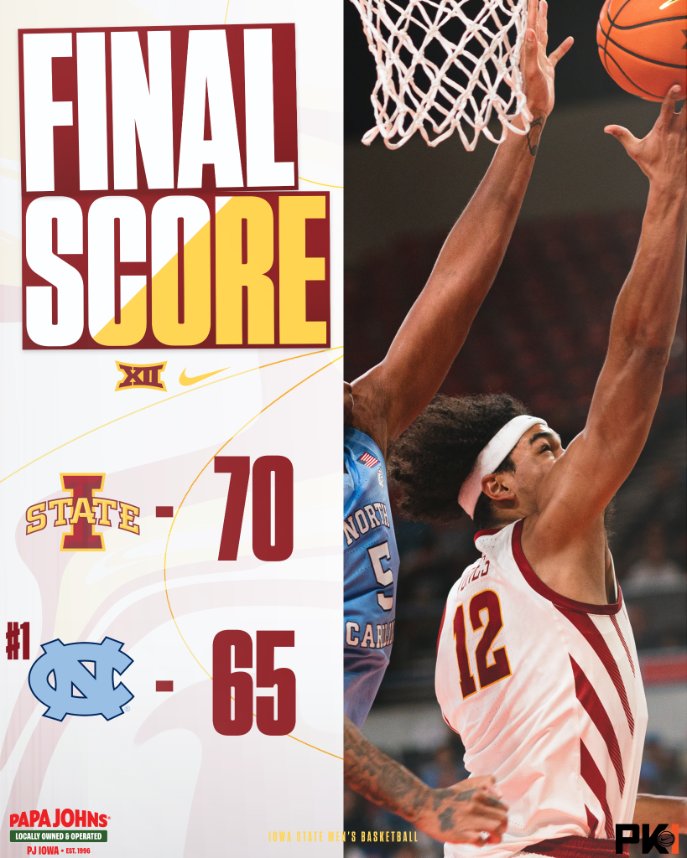 By ADAM ZAGORIA No. 1 has gone down. Caleb Grill had the game of his life, scoring a career-high 31 points and making 7-of-11 from deep, as Iowa State stunned No. 1 North Carolina 70-65 in the Knight Invitational semifinals in Portland, Ore. The Cyclones will face No. 18 Alabama or No. 20 UConn in the championship game on Sunday. “Man, it feels amazing, I give credit to all the teammates and all the coaches for what they did preparing us from the start of the year,” Grill, the 6-foot-3 senior guard who transferred to Iowa State in April to follow coach T.J. Otzelberger, told ESPN’s Myron Medcalf. “You know, we live for these moments,” added Grill, who shot 11-of-15 from the field. “That’s what we always focus on, finishing games and finishing strong. We didn’t do it yesterday [in an 81-79 overtime win over Villanova], so it was a big thing to do it today so I’m just happy that we came through today.”

The SIXTH 3-pointer of the night for @Caleb_Grill0.

It is Iowa State’s first win vs. an AP No. 1 since they beat Oklahoma on Jan. 18, 2016. The Cyclones are 3–19 all-time against the AP No. 1. No. 2 Houston (5-0) is poised to become the new No. 1 on Monday assuming they take care of Kent State on Sunday at home. North Carolina (4-1`) lost for the 22nd time as the No. 1 team against an unranked opponent. Jaren Holmes added 22 points for Iowa State and Robert Jones had 10. RJ Davis led the Tar Heels with 15, Armando Bacot had 13 and Caleb Love 12. PORTLAND 83, VILLANOVA 71 Led by coach Shantay Legans, Portland secured a huge program win by beating Villanova, 83-71, in the consolation bracket of the Knight Invitational. Moses Wood had 16 points and 6 rebounds and Tyler Robertson went for 15 points, 8 assists and 7 rebounds for Portland (5-3).

Caleb Daniels had 18 before fouling out for Villanova, which continues to play without star freshman Cam Whitmore (thumb) and Justin Moore (Achilles). The Wildcats, who began the season at No. 16 in the AP Poll, dropped to 2-4 under first-year coach Kyle Neptune, who replaced Jay Wright, who led the program to two NCAA championships before retiring in April. Follow Adam Zagoria on Twitter Follow ZAGSBLOGHoops on Instagram And Like ZAGS on Facebook