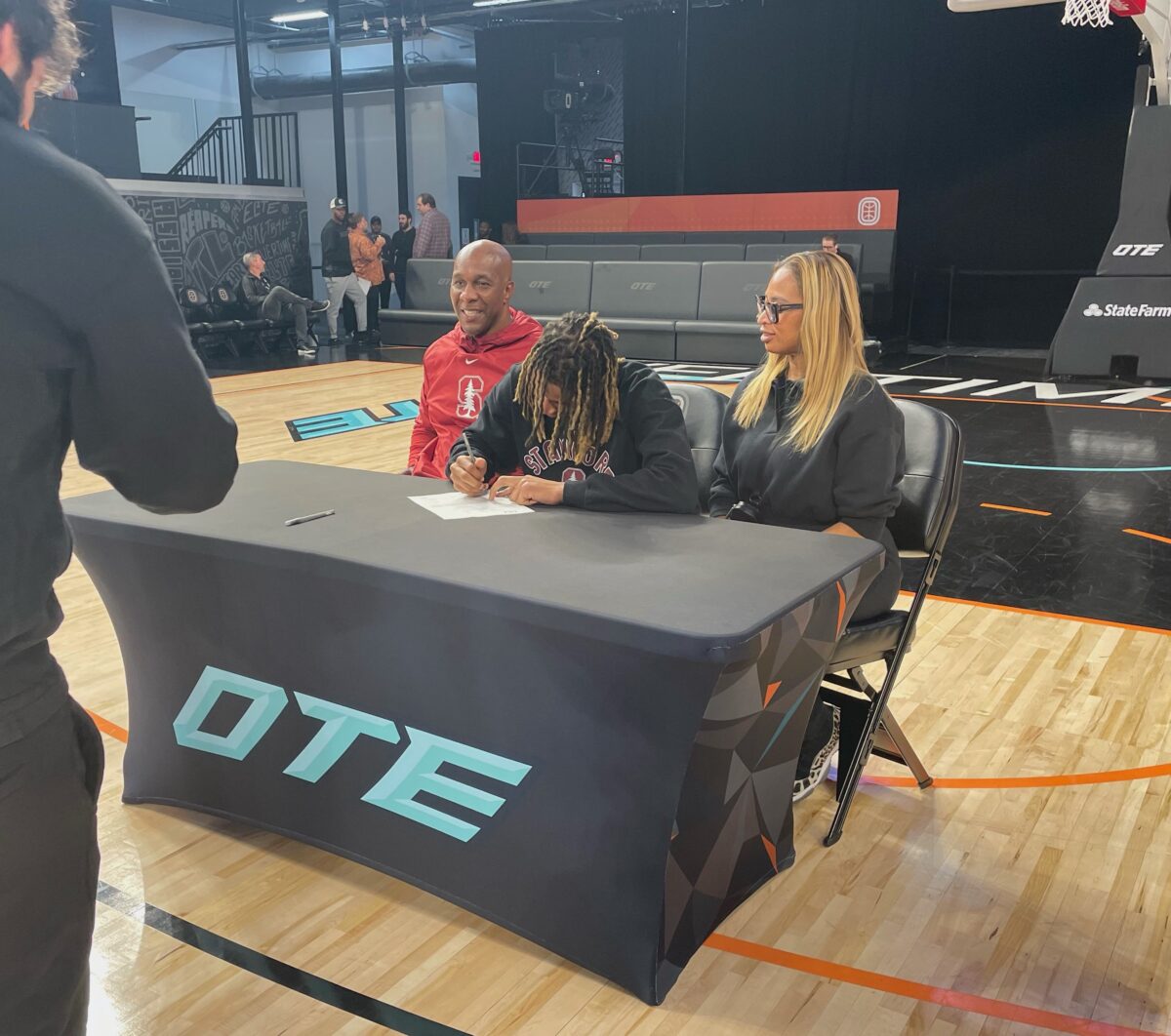 By JACOB POLACHECK ATLANTA – Class of 2023 four-star guard Kanaan Carlyle signed his national letter of intent with Stanford on Saturday in Atlantic Station. The 6-foot-2, 170-pound combo guard from Overtime Elite (GA), announced his commitment to Stanford in January. He will also be joined by four-star forward Andrej Stojakovic in the Cardinals’ recruiting class. “It’s all about my future,” Carlyle said. “If I don’t make it to the NBA, there’s always going to life after the NBA, so I’m setting myself up best for that.” Damien Wilkins, the general manager and head of basketball for Overtime Elite, had high praise for Carlyle ahead of his signing ceremony. “Kanaan is special. He’s a guy that plays hard on both ends of the floor,” Wilkins said. “I know he’s excited about his opportunity with Stanford. It’s a great school and a great athletic program. I know his family is excited for him, we’re excited for him and I’m happy to see what the future brings for him.” Carlyle joins Kentucky commit Rob Dillingham as the first group of players from the Overtime Elite program to sign a national letter of intent. At the signing ceremony, Carlyle’s mother, Karen, said the whole family is excited for Kanaan’s next step. “Everything excites me about Stanford,” she said. “As a mom, again, he’s amazing at basketball, but for me it’s about academics. What happens after basketball? This is amazing that he’s going to Stanford because I feel that if something happens, he’s covered either way.” The league currently has 20 players that joined for the 2021-22 season, getting paid while remaining ineligible for college. The league’s 10 new players this season, including Carlyle, have turned down a salary and instead opted for the league’s “scholarship option”, which retains their NCAA eligibility. Carlyle is averaging 9.5 points, 4.0 rebounds and 1.0 assist per game this season with the YNG Dreamerz. Overtime Elite expanded its league this year, featuring the YNG Dreamerz, City Reapers and Cold Hearts as well as additional high school programs Hillcrest Prep (AZ), Our Saviour Lutheran (NY) and Word of God (NC). “He’s quick, fast and athletic. He’s got a skill package where he can shoot it, he can drive,” City Reapers coach Dave Leitao said. “The potential for his overall package is limitless. Now, he’s got to respect the game, grow, continue to work so that his gifts can continue to flourish. I love him. I absolutely love him. On the defensive end, Carlyle is averaging 2.5 steals per game. “He’s got some real unteachable gifts,” Leitao said. “One is his ferocious approach to the game on both ends. He can defend the ball very, very well.” Follow Jacob Polacheck on Twitter Follow Adam Zagoria on Twitter Follow ZAGSBLOGHoops on Instagram And Like ZAGS on Facebook