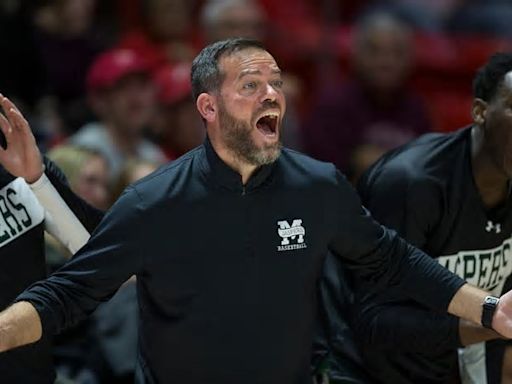 By ADAM ZAGORIA Steve Masiello, fired two weeks ago as the head coach at Manhattan, sat behind Rick Pitino’s Iona bench Monday night for the Gaels’ season-opening 78-50 rout of Ivy League preseason favorite Penn and will help out the team going forward. Pitino and Masiello go way back. Masiello was Pitino’s ball boy with the Knicks, and also served as one of his top assistants at Louisville. Pitino said they met 10 minutes after Masiello was fired Oct. 25 and called the firing “tragic,” in part because Masiello had 10 seniors on a team picked second behind Iona in the MAAC. Masiello has attended about half a dozen Iona practices since being fired. “I’m definitely going to be there for him because there’s a great coach that never got a chance to coach his 10 seniors,” Pitino said after the game. “And it’s really tragic to do that to a person, whatever the reasons may be. And I know what the reasons are. “So he’s part of us now, and he’s part of my family. Tonight he gave me like four great suggestions, so I’m going to lean on him because he knows the MAAC extremely well. And it’s great, you don’t have to pay a guy. And that’s pretty much the way Iona is, they don’t pay anybody.” Asked if Masiello would travel with the Gaels, Pitino said, “Yeah, if he wants to come on the road, he can come on the road.” Pitino said there was no way to make Masiello an official part of the team by hiring him. “We can’t, we have no money,” he said. “You can only have so many assistants.” Pitino vowed that Masiello would be a head coach again in the not-too-distant future. “Look, he’s going to be a head coach somewhere at the end of the year again,” Pitino said. “He’s a great coach, and what a shame that he didn’t get a chance to coach Manhattan’s 10 seniors this year.” Masiello’s contract at Manhattan was set to expire in April, and sources said there was a dispute with AD Marianne Reilly about an extension. There were also larger issues within the athletic department that played a prominent role, sources said. Pitino said getting fired is “the loneliest damn thing” and “is an awful, awful experience.” “When I was fired (at Louisville), I was speaking to my team, they’re crying hysterically, I’m crying hysterically,” he said. “I’m there 17 years, I go to get my personal belongings, and my office was locked. They locked me out of my office after 17 years.” “I don’t want Steve to go through what I went through, and he’s not going to,” he said. In the wake of his firing, Jose Perez, the team’s best player and the MAAC Preseason Player of the Year, transferred to West Virginia. Under interim coach Rashawn Stores, Manhattan lost its opener at VCU, 73-56. Follow Adam Zagoria on Twitter Follow ZAGSBLOGHoops on Instagram And Like ZAGS on Facebook