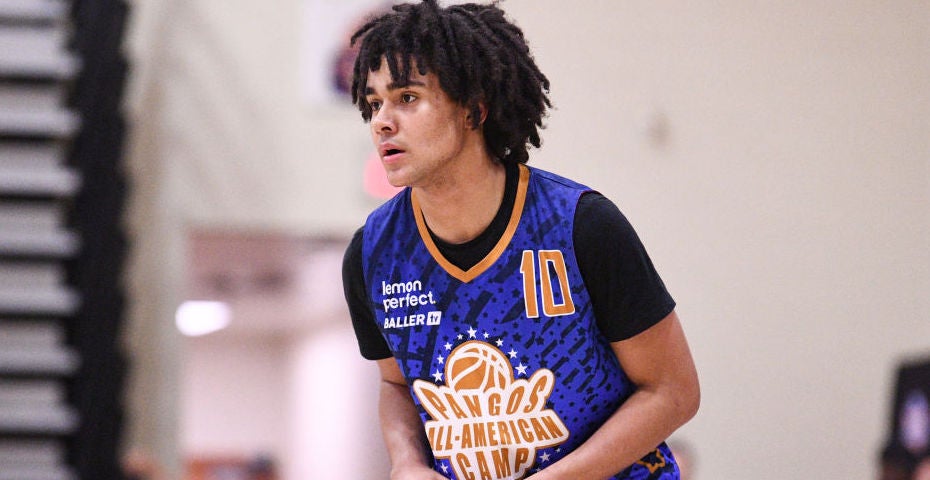 By ADAM ZAGORIA Elliot Cadeau has already had a busy summer, and the Under Armor Elite 24 Game hasn’t even happened yet. The game is set for 7 p.m. ET Friday on ESPNU. The 6-foot-1 Class of 2024 point guard from New Jersey has already played at the Peach Jam with New Heights Lightning and earned MVP honors while helping Sweden win the Division B final in the European U18 Final. In the semifinals vs. Iceland, Cadeau dropped 25 points, 5 assists and 5 steals. In the championship game, he poured in 36 points, 5 rebounds, 4 assists and 4 steals in a win over Denmark. “It was great because it helped moved our 2005 team to the A Division next year,” he said by phone from Chicago ahead of the Under Armor Game. “I felt like that was really special to me because it really helped the country out and get a chance to compete against the real best European teams next year.”

On the recruiting front, Cadeau has picked up offers from North Carolina, Baylor, Louisville and Georgetown while Kentucky remains involved in his recruitment. “I’m not close to making a decision, a lot of new schools are in contact with me now,” he said. He broke down several of his top suitors: UNC: “I’m definitely going to visit UNC, but that’s the only one I know right now. “Their message right now, we don’t really talk basketball yet, but Coach Hubert [Davis] is in contact with me a lot. The interest is there. They really want me and I feel like a priority.” He added that he has talked with 2023 UNC commit Simeon Wilcher of Roselle Catholic about the school “a lot.” “He really likes it and he thinks I could fit their system,” Cadeau said. Texas Tech (where he has a visit in September): “I don’t really have a dream school anymore, but they were my dream school growing up. “They think that I can really excel in their program because they make it really far in tournaments without point guards. An elite point guard is their missing piece to winning more games, so they feel that I can really help them win.” Baylor: “They’ve been talking to me a lot. They like a lot of international prospects. They signed the kid Miro Little from Finland for the 2023 class. They just like how international point guards play.” Georgetown: “I’ve been talking to them a lot. I’ve been talking to mostly every coach on the staff. And they’re just really interested in me and they want to rebuild their elite program. And they did. The 2024 class can do it, and they want me.” Louisville: “I spoke to the head coach [Kenny Payne] one time and he said he really like my game, and they game me the offer. They’re a really good program.” Kentucky: “They just been talking to me. I haven’t talked to the head coach yet but the assistant KT Turner talks to me a lot. That would mean a lot [to get an offer], that’s a school I really, really would consider. Yeah, I love their program. I like that they produce pros and numbers-wise, if you go to Kentucky you have a really good chance of making it out [to the NBA] so I like that.” Cadeau is still considering reclassifying to 2023 following his transfer to Link Academy (MO) under new coach Bill Armstrong from Bergen Catholic, where he was coached by Billy Armstrong, who remains at that school. “It’s still something I’m considering, yeah,” he said. Follow Adam Zagoria on Twitter Follow ZAGSBLOGHoops on Instagram And Like ZAGS on Facebook