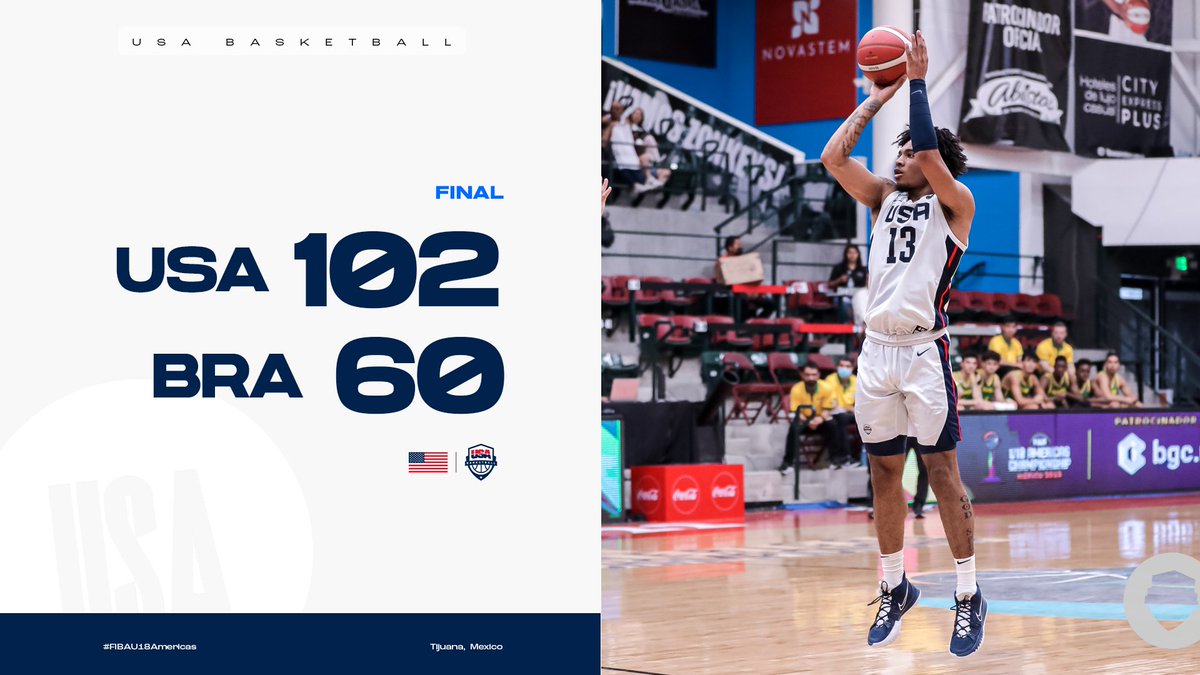 The 2022 USA Basketball U18 Men’s National Team (6-0 overall) won the 2022 FIBA U18 Americas Championship title after defeating Brazil 102-60 Sunday night at Auditorio Zonkeys in Tijuana, Mexico. Cam Whitmore, who averaged 18.7 points over the course of the tournament, was selected as the tournament MVP and to the All-Tournament Team. In the gold medal game, Whitmore scored 30 points, the most points scored by an American in a gold medal game, while grabbing 12 rebounds. His 30-point mark leaves him tied for third-most by an American in U18 competition and marks the first time an American player scored 30 points since 2014 (Luke Kennard vs. URU, 6/20/14). “Being the MVP and holding the gold medal – it’s different,” Whitmore said. “It was very exciting and I’m very blessed.” Joining Whitmore on the All-Tournament Team is Kel’el Ware, who averaged 15.7 points through six games and scored 21 points in the gold medal game. He also averaged 6.8 rebounds and 1.8 blocks. “This means a lot playing with this group of guys,” Ware said. “Being named to the all-tournament team gives me a boost of confidence because I am one of the guys that played great here. That means a lot.” With the victory, the USA has captured six straight FIBA U18 gold medals and owns an all-time 65-2 record at the event.  “This team really left their egos at home and played together,” USA head coach Tad Boyle said. “It’s a challenge to come together as a group in such a short period of time and play for each other, but these guys have done a great job at that. This is a testament to them.” The USA made it a point to get the ball inside early and often, jumping out to a 9-0 lead in the first four minutes. Then, with five minutes left in the quarter, Whitmore took over offensively, going on a 10-0 run on his own, as the U.S. extended its lead to 28-9 by the end of the first frame of action. In the second, the U.S. built on its first quarter momentum, extending its lead to 57-22 by halftime. The U.S. built separation thanks to its defense, which held Brazil to 25% from the field and 25% from 3-point range through the first 20 minutes of action. The second half of the game action went a lot like the first as the U.S. continued to build its lead en route to its 10th U18 gold medal. “We are part of something bigger than ourselves,” Boyle said. “To represent USA and USA Basketball means a lot to me and every one of these kids.” For the game, the USA held Brazil to 27% shooting from the field (27-80 FG) and 29% from three (7-24 3FG). The U.S. also dished out 23 assists, marking the fifth time in the competition it finished the game with 20-plus team assists. Overall, the USA led the competition in key stat categories such as scoring (105.2 ppg), total points (631), total rebounds (235), total blocks (52), total assists (146) and total steals (75). With the victory today, the USA qualified for the 2023 FIBA U19 World Cup, alongside Brazil, bronze medalist Canada and Argentina, which finished fourth. “Hopefully we can do the same thing in U19 next year,” Ware said. “This feels good.” (Release via USA Basketball) Follow Adam Zagoria on Twitter Follow ZAGSBLOGHoops on Instagram And Like ZAGS on Facebook