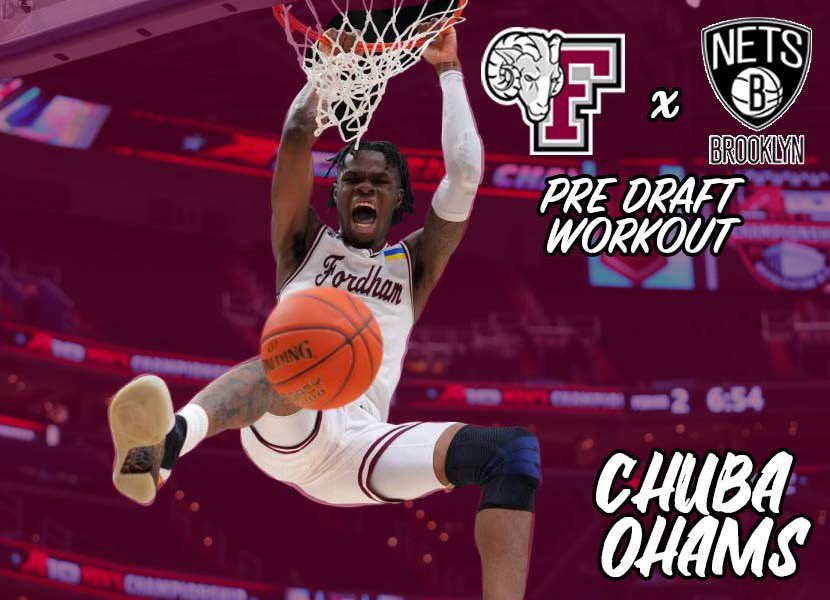 By ADAM ZAGORIA Chuba Ohams took another step toward his dream of playing professional basketball this past week when he worked out for the Brooklyn Nets. The 6-foot-9 Bronx native was part of a group workout for Brooklyn on Wednesday that included Scotty Pippen Jr. (Vanderbilt), Davion Mintz (Kentucky), Marcus Bingham Jr. (Michigan State) Justin Minaya (Providence), Davion Warren (Texas Tech) and Tyson Jolly (Iona). “I played really well, they told me I played really well,” Ohams, 24, said by phone. “It was a good workout, we competed a little bit.” Nets GM Sean Marks and coach Steve Nash were at the workout, and Ohams also saw Joe Harris, Ben Simmons, Seth Curry and “all of the rookies” at the training facility. Ohams averaged 14.8 points and 11.6 rebounds this past year at Fordham, where his career began in 2016 after his tenure at Wadleigh High School in Harlem and Putnam Science (CT). “I pretty much showed I could guard every position on the court,” he said of the Nets workout. “I wanted to show them I have an improved jump shot that I’ve been working on. They told me I shot the ball really well. “I’m just a hard-playing dude, I get after it on defense. Everybody knows I’m a really good rebounder, so pretty much just showed them that I’m a guy that can guard every position.” Ohams had an injury-plagued career at Fordham. On Jan. 5 2020, he suffered a patella tendon injury after landing during a game against La Salle. “I went up, I just jumped and the only thing I remember is I just ended up on the ground,” he said. “By the time I got to the hospital, my knee was as a big as a basketball.” He ended up missing miss a year and a half. “It was frustrating, it was definitely frustrating,” he said. “I wanted to come back so bad. I pushed myself. I had days where I went three-a-days, that’s how bad I wanted it. So I wanted to come back so bad. Every time I got feedback from the doctor, it was really discouraging. I feel like I made intense progress, really good progress, and I still had a ways to go before I could get back on the court.” The COVID-19 pandemic also complicated his recovery because it made it harder to get in the gym and train. “It was hard, I learned a lot,” he said. “But at the end of the day, it was very tough. I could play the game I loved for a year and a half. I couldn’t be with my teammates, I couldn’t compete, I pretty much had to watch and be a player-coach type.” Still, he persevered and had a strong season last year when the Rams finished 16-16 under coach Kyle Neptune, who then left to replace Jay Wright at Villanova. Last month Ohams graduated with a Masters Degree in Media Management from the Gabelli School of Business. Ohams expects to have other workouts coming up ahead of the NBA Draft on June 23 at Barclays Center. The Nets don’t have a draft pick, but are still looking to evaluate players in case they add players down the road. “They don’t have a draft pick yet but they’re looking to pick up a guy,” Ohams said. “They still have a Summer League team, they still have Two-Way options, they still have a a G League option, stuff like that.” If he doesn’t land somewhere in the NBA, Ohams could end up playing overseas. But of course, his primary goal is stay home in the U.S. “Definitely my goal has always been to play in the NBA,” he said. “Whatever happens, happens. My goal is definitely to play in the NBA.” Follow Adam Zagoria on Twitter Follow ZAGSBLOGHoops on Instagram And Like ZAGS on Facebook