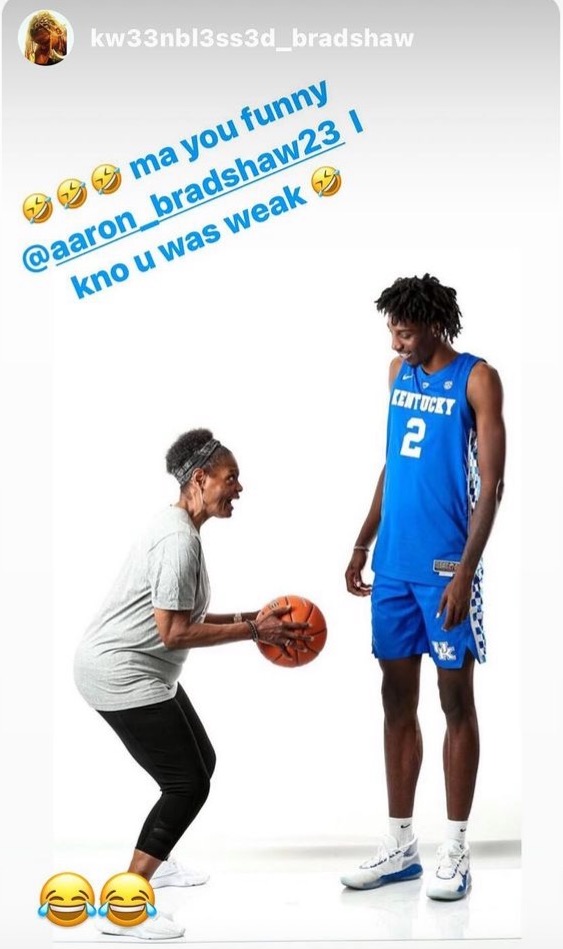 By ADAM ZAGORIA Aaron Bradshaw, the 7-foot-2 big man from Camden (NJ) High School and the NJ Scholars Nike EYBL team, took an official visit to Kentucky this weekend and then headed to Louisville. Bradshaw is a high school and AAU teammate of D.J. Wagner, the No. 1 prospect in the Class of 2023 who is trending toward Louisville but has also been recruited by Kentucky and others. Bradshaw picked up an offer from Kentucky in April. Kentucky currently has two players from Camden High on its roster in Lance Ware and Kareem Watkins, Wagner’s brother. Calipari, of course, also coached Dajuan Wagner, D.J.’s father and the all-time leading scorer in New Jersey prep history, at Memphis. Bradshaw averaged 8.9 points and 7.4 rebounds this past season for a Camden team that won the New Jersey Group 2 state title and reached the title game of the final Tournament of Champions in New Jersey history, where they lost to Roselle Catholic. 61-58, on March 20. As for who has been recruiting Bradshaw, he said in April, “I would say Kentucky, Maryland, Kansas and Seton Hall.” That was before the Louisville visit, and Kenny Payne and staff would probably love to get Wagner and Bradshaw in a package deal. Former Louisville star Pervis Ellison is a coach with the Scholars, and a slew of ex-Louisville stars, including Darrell Griffith, watched Wagner and Bradshaw last month at the Nike EYBL stop in Louisville. Camden head coach Rick Brunson is reportedly leaving to become an assistant with the Knicks, leaving the Camden job open for now. “I want to go into the high school season committed,” Bradshaw said in April. “I don’t want to have to worry about all that other stuff. I want to focus on school work and things like that.” Next month, Bradshaw and Wagner will focus on trying to win Peach Jam, which runs the week of July 17-24. Follow Adam Zagoria on Twitter Follow ZAGSBLOGHoops on Instagram And Like ZAGS on Facebook

Dior Johnson lands at Pitt after decommitting from Oregon