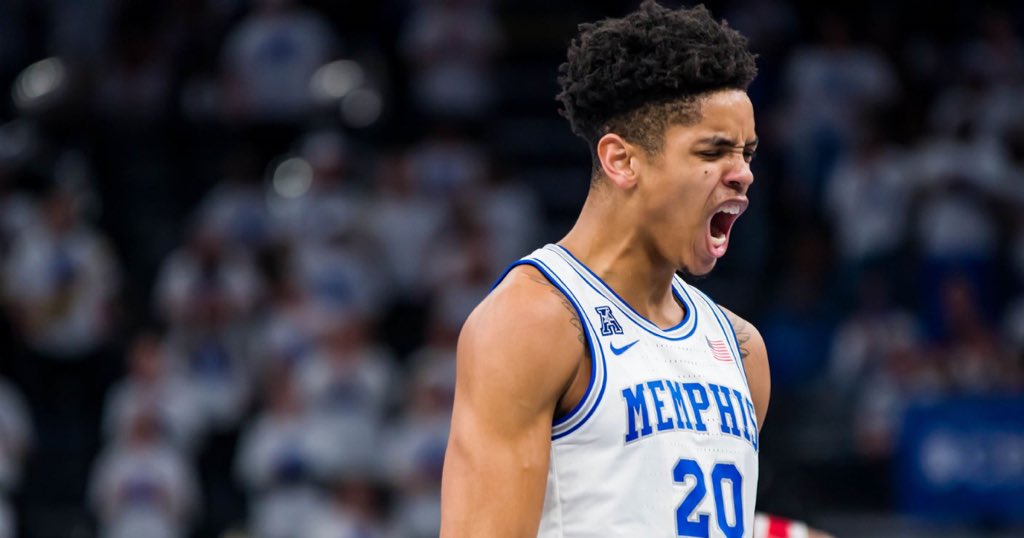 By ADAM ZAGORIA CHICAGO — When it comes to position-less basketball, Memphis forward Josh Minott appears to be a perfect fit for the modern NBA. The 6-foot-9, 19-year old can play multiple positions on offense and feels comfortable guarding all five positions defensively. “I don’t really feel like a liability on anyone on the court,” he said last week at the NBA Draft Combine at Wintrust Arena. “I feel like I’m comfortable guarding every shape and size that there is. “And offensively, I’m just a creator, and that’s with or without the ball. I’m someone that’s perfectly capable of doing the stuff that doesn’t appear on the stat sheet…Not many people feel comfortable without the ball, I’m someone who I’m always trying to get some type of motion on the court, whether that be cutting, flare screens, split actions, all that. I feel like I’m comfortable in NBA situations. I understand reads and I feel like I’d be attractive to any team.” Minott averaged 6.6 points and 3.8 rebounds in 14.6 minutes last season at Memphis, but his per-36 minutes numbers are 16.2 points, 9.2 rebounds, 2.3 assists, 2.0 steals and 1.6 blocks. He is projected in the 40s in the June 23 NBA Draft by both ESPN.com and Tankathon, and could turn out to be a steal if drafted that low. Before the NBA Combine, he worked out for San Antonio, Boston, Brooklyn, Milwaukee, Memphis and Indiana. This week and next he has Orlando, Toronto, Atlanta, San Antonio, Chicago and Charlotte. Some believe Minott could sneak into the first round, which would be a dream come true for him. “I mean, everyone dreams about that,” he said. “I mean, that’s really why I’m here, playing so hard, I’m trying to look for any opportunity to show what I can do. I feel like I’m someone who can be molded into anything. There’s not going to be a limit to my game. Whatever role needs to be done, I can do it.” As a four-star prospect coming out of Boca Raton (FL) St. Andrew’s School, Minott committed to Penny Hardaway and Memphis in August 2020 over Baylor, Maryland and Texas. At the time, his travel team coach with Team Parsons , Roosevelt Gray, who also coached Mitch Richmond, David Benoit and Reggie Cross, compared him to a young Kevin Durant. “Josh’s best basketball is ahead of him because he hasn’t even scratched the surface,” Gray said then. “When I said I had the next Kevin Durant, I was just talking about his length. But as far as the handles, he’s more of a point guard than Durant will ever be because he can go one, two, three, but he’s such a mismatch for everybody because he can play the point. He can facilitate.” Minott chose Memphis largely because he wanted to learn from Penny Hardaway, a former No. 3 pick in the NBA Draft and a four-time All-Star. Minott said he got exactly what he needed in his one year with Hardaway. “Just someone who has that type of experience, he’s been there, done it, excelled at such a high level,” he said. “Every day if you’re willing to listen he’s going to tell you something that will help you at this level. “And it’s really just how much you want to get out of it is how much you’re going to absorb so if you come in as a sponge, I feel like you’re going to take a lot from what he has to say. And I tried to have that mindset each day, just no matter what just learn something every day.” For his part, Hardaway said of Minott, “His ability is amazing.” Because Hardaway had a deep roster, Minott only averaged about 14 minutes per game, but former assistant Cody Toppert called him “wildly productive” when he was on the court. “He’s been patient and now he’s getting his chance,” Hardaway said late in the season. “He’s a guy that always showed promise and now we’re expecting big things from him.” And Minott is expecting big things from himself. He just wants a chance to show it with an NBA team — and whoever chooses him on Draft night will be getting someone ready to work and to learn. “It’s a competitive industry, even when I make it I can’t just relax,” he said. “Next year a guy is trying to take my job the same way I’m trying to take someone’s job right now to be honest. “[Getting drafted] would definitely be something to recognize and appreciate.” Follow Adam Zagoria on Twitter Follow ZAGSBLOGHoops on Instagram And Like ZAGS on Facebook