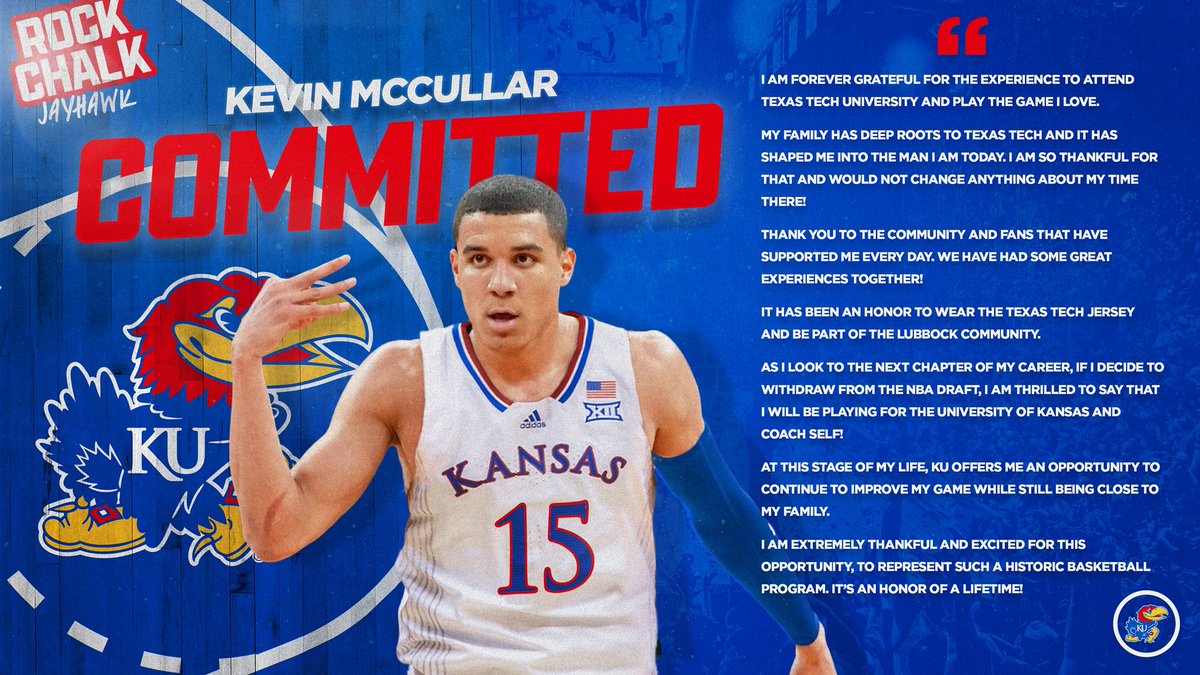 By JACOB POLACHECK Texas Tech transfer Kevin McCullar announced his commitment to Kansas on Thursday via Twitter. The 6-foot-6, 210-pound guard still has his name in the NBA Draft and has conducted workouts with the New York Knicks, Brooklyn Nets and Boston Celtics. “As I look to the next chapter of my career, if I decide to withdraw from the NBA Draft, I am thrilled to say that I will be playing for the University of Kansas and Coach Self,” McCullar wrote via Twitter. “At this stage of my life, KU offers me an opportunity to continue to improve my game while still being close to my family. I am extremely thankful and excited for this opportunity, to represent such a historic basketball program. It’s an honor of a lifetime.” McCullar averaged 10.1 points, 4.6 rebounds and 3.1 assists per game with the Red Raiders during the 2021-22 season.  Coming off of Kansas’ 2022 National Championship run, Ochai Agbaji, Christian Braun, David McCormack, Jalen Wilson and Remy Martin are all pursuing pro opportunities. Braun and Wilson could still opt to return, but have fared well at the NBA Combine. Kansas also has the nation’s No. 3-ranked recruiting class in 2022 featuring five-stars Gradey Dick and MJ Rice and four-stars Ernest Udeh Jr. and Zuby Ejiofor. Follow Jacob Polacheck on Twitter Follow Adam Zagoria on Twitter Follow ZAGSBLOGHoops on Instagram And Like ZAGS on Facebook