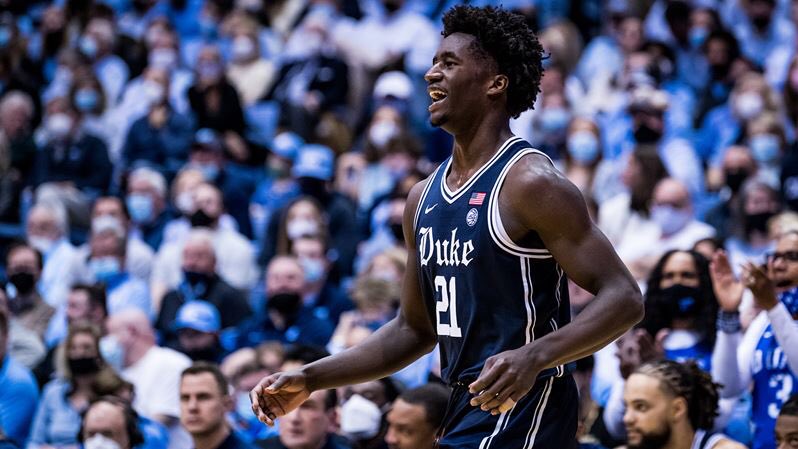 Duke freshman AJ Griffin has become the fifth Blue Devil this season toe declare for the 2022 NBA Draft. The honorable mention All-ACC selection and member of the ACC All-Freshman Team intends to hire an agent and is a projected Top-10 pick. He follows fellow freshmen Paolo Banchero and Trevor Keels, sophomore Mark Williams and junior Wendell Moore Jr. into the draft. “I know a lot of kids grow up dreaming they could wear that Duke uniform and play in Cameron Indoor Stadium,” said Griffin. “I was one of those kids growing up, and I am so grateful I had that opportunity. As I declare for the 2022 NBA Draft, I am filled with gratitude. It was an honor to play for Duke and represent The Brotherhood.  It was a dream come true. My experiences have helped prepare me for this moment and I am proud to know I will be a Blue Devil for life.” The Ossining, N.Y., native was one of the best freshman three-point shooters in the nation this past season. His .447 three-point field goal percentage (71-of-159) ranked as the fifth best in school history and the best by a Blue Devil since Greg Paulus shot .450 (68-of-151) as a sophomore in 2007. On Duke’s freshman list, Griffin’s three-point percentage ranked second to Daniel Ewing’s .457 (32-of-70) mark in 2002. “AJ was one of best shooters in the nation and his skillset is exactly what NBA teams are looking for,” said head coach Mike Krzyzewski, who retired following this season. “He is a remarkable young man that comes from a beautiful family and we’re certainly going to miss them. AJ showed up every day with a smile on his face and his positive energy was infectious. We appreciate everything that he did for our program and know that great things will happen for him.” For the season, Griffin was one of five Blue Devils to average in double figures at 10.4 points per game. He averaged 3.9 rebounds and shot .493 from the field in addition to his .447 three-point mark. The freshman was Duke’s second-leading scorer in ACC play at 12.6 points per game, while shooting .489 (46-of-94) from behind the arc and averaging 4.5 rebounds. A two-time ACC Freshman of the Week pick, Griffin poured in a career-high 27 points in Duke’s 87-67 victory at North Carolina on February 5 and scored 22 points on 5-of-5 from three-point range in a win at Louisville on January 29. He also scored 22 on 8-of-11 shooting in a win at Wake Forest in mid-January. His 18 points against Arkansas in the NCAA Tournament West Regional Final were a team high in helping lift the Blue Devils to the Final Four. Duke has had at least one player selected in 34 of 41 NBA Drafts under Krzyzewski. Coach K has tutored 68 draft picks since taking over the Blue Devils program, including a Draft-record 42 first-round selections. (Release via Duke) Follow Adam Zagoria on Twitter Follow ZAGSBLOGHoops on Instagram And Like ZAGS on Facebook