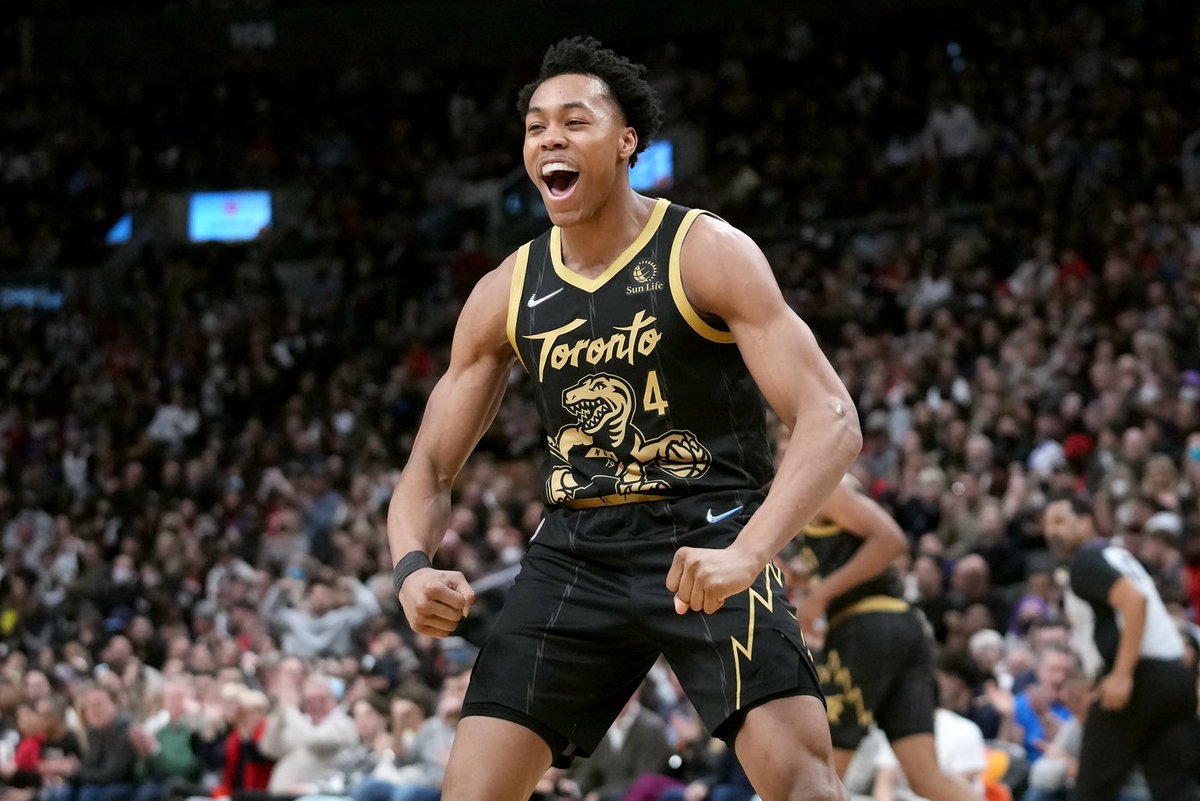 Toronto Raptors wing Scottie Barnes has been named the 2021-22 NBA Rookie of the Year, the NBA announced Saturday.  He is the third player to win the annual award with Toronto, joining Damon Stoudamire (1995-96) and Vince Carter (1998-99). Barnes received 378 points (48 first-place votes) from a global panel of 100 sportswriters and broadcasters.  Cleveland Cavaliers forward-center Evan Mobley finished in second place with 363 points (43 first-place votes).  The 15-point difference between the first- and second-place finishers marks the smallest margin in NBA Rookie of the Year balloting under the current voting format, which began with the 2002-03 season. Detroit Pistons guard Cade Cunningham finished in third place with 153 points (nine first-place votes).  Players were awarded five points for each first-place vote, three points for each second-place vote and one point for each third-place vote. Barnes averaged 15.3 points, 7.5 rebounds, 3.5 assists, 1.08 steals and 0.74 blocks in 35.4 minutes in 74 games, leading all rookies in minutes, ranking third in points and rebounds and finishing fifth in assists, steals and blocks.  He is the sixth rookie to average at least 15.0 points, 7.0 rebounds, 3.0 assists, 1.00 steals and 0.70 blocks in a season since steals and blocks became official statistics in the 1973-74 season, joining Alvan Adams (1975-76), Lionel Simmons (1990-91), Chris Webber (1993-94), Lamar Odom (1999-00) and Ben Simmons (2017-18).  A starter in every game he played, Barnes became the first rookie in Raptors history to record at least 1,000 points, 500 rebounds and 250 assists in a season.  He set the franchise rookie record for offensive rebounds with 195, which was a team high and ranked 15th among all NBA players. Barnes, 20, was named the Kia NBA Eastern Conference Rookie of the Month twice (February and March/April).  He was also selected to participate in the Clorox Rising Stars at NBA All-Star 2022.  Barnes helped the Raptors improve to 48-34 this season after finishing 27-45 last season, with Toronto earning the fifth seed in the Eastern Conference for the 2022 NBA Playoffs presented by Google Pixel.  On March 18, Barnes posted career highs of 31 points and 17 rebounds to go with six assists against the Los Angeles Lakers, becoming the first rookie to have at least 30 points, 15 rebounds and five assists in a game since Blake Griffin in March 2011.  Barnes finished with 28 points, 16 rebounds and five steals against the Brooklyn Nets on Feb. 28, becoming the first rookie to reach 25 points, 15 rebounds and five steals in a game since Shaquille O’Neal in March 1993.  Toronto selected Barnes with the fourth overall pick in the 2021 NBA Draft.  Barnes played one season at Florida State, where he was named the 2020-21 ACC Freshman of the Year and Sixth Man of the Year.  Barnes will be presented with a special edition 75th Anniversary commemorative trophy today in celebration of the honor, gifted in addition to the Kia NBA Rookie of the Year Award trophy, which he will receive later.  The commemorative trophy, composed of a solid crystal basketball, features the NBA 75 logo 3D laser etched and suspended within its center.   The voting results for the 2021-22 Kia NBA Rookie of the Year Award are below.  The balloting was tabulated by the independent accounting firm Ernst & Young LLP.  Complete ballots for each voter will be posted at PR.NBA.com after the announcement of all end-of-season awards.  Below is the all-time list of recipients of the Kia NBA Rookie of the Year Award. Release via NBA Follow Adam Zagoria on Twitter Follow ZAGSBLOGHoops on Instagram And Like ZAGS on Facebook