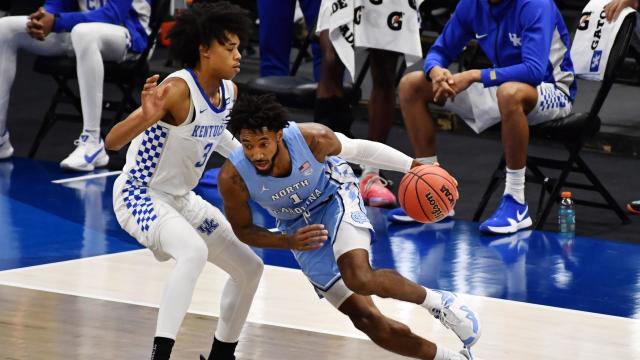 By ADAM ZAGORIA No. 21 Kentucky will now face North Carolina on Saturday in the CBS Sports Classic in Las Vegas after both team’s previous opponents were knocked out by COVID-19 issues, sources said. The game will tip at 5:30 ET. Kentucky was originally supposed to face Ohio State, but the Buckeyes announced Thursday the game was canceled due top COVID issues within their program. On Friday, UCLA announced its game with North Carolina was also canceled due to COVID issues within the Bruins program that triggered a pause. North Carolina leads the head-to-head with Kentucky, 25-16, with the Tar Heels winning the most recent game, 75-63, in 2020 in Cleveland. Previous North Carolina-Kentucky Matchups in the CBS Sports Classic Dec. 19, 2020:  North Carolina 75, Kentucky 63 (Rocket Mortgage FieldHouse, Cleveland) Dec. 22, 2018:  Kentucky 80, North Carolina 72 (United Center, Chicago) Dec. 17, 2016:  Kentucky 103, North Carolina 100 (T-Mobile Arena, Las Vegas) Follow Adam Zagoria on Twitter Follow ZAGSBLOGHoops on Instagram And Like ZAGS on Facebook