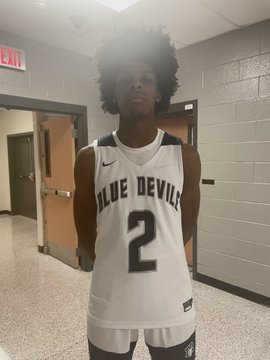 By JACOB POLACHECK ATLANTA – London Johnson, the No. 30-ranked prospect in the class of 2023, plans to announce his college decision ‘very soon’, he tells ZAGSBLOG.  “I’m looking to make my decision coming up very soon,” Johnson said. “I’d say in the next three weeks.”  The 6-foot-4, 165-pound guard from Norcross (GA) High School, recently cut his list to a final 12 of Xavier, USC, North Carolina, Auburn, Wake Forest, Clemson, Georgia, Houston, Virginia, Alabama, NC State and Florida. He broke down each school:  Xavier: “I really have a great connection with coach Jonas Hayes. We got along from the first time I met him. He’s from Atlanta so I have a connection with him.” USC: “Also a connection through Norcross actually. One of the former players at Norcross – Kyle Sturdivant – he went to Southern California.” North Carolina: “North Carolina was a dream school for me growing up. I’ve always liked them.”  Auburn: “I like Auburn also being that Sharife Cooper was a point guard that just went to the NBA going through there.”  Wake Forest: “Living in North Carolina, all of the North Carolina schools would be a dream for me.”  Clemson: “I have a great connection with the coach as well. He thinks my game fits in very well with the system.”  Georgia: “I have a good rapport with both of the coaches – coach (Steve) McClain and coach (Tom) Crean.”  Houston: “That’s actually where I was born, so I like Houston a lot.”  Virginia: “I probably have a lot of connections, actually. I lived in Richmond for a long time and I’m close to all the coaches over there too.”  Alabama: “I also have a great connection because my trainer, Rob Allen, he knows a lot of players through there. He trains a lot of their players. I went up there a couple times.”  NC State: “Being from North Carolina, that was a dream school growing up.”  Florida: “I really watched Florida growing up. BJ Edwards was my teammate when I lived in Tennessee and he was from Florida so he put Florida in my head.”  Johnson says he hasn’t made his decision yet, but will be taking in a number of factors.  “Really, the main thing is the connection with the coach and how my style of play fits with the program,” he said. “Also, what players they have coming in and what players will be there.”  Johnson was excellent for Norcross Saturday evening, leading his team to a 75-57 victory over Pace Academy (GA) with 27 points on 6-for-9 from three-point range while also going for eight assists and four steals.  “We played great as a team, getting great stops and rebounding the ball,” he said. “That’s something we need to work on actually. I think we lost the rebounding fight. I feel like I shot the ball well when we needed it in a couple clutch moments.”  Follow Jacob Polacheck on Twitter Follow Adam Zagoria on Twitter Follow ZAGSBLOGHoops on Instagram And Like ZAGS on Facebook