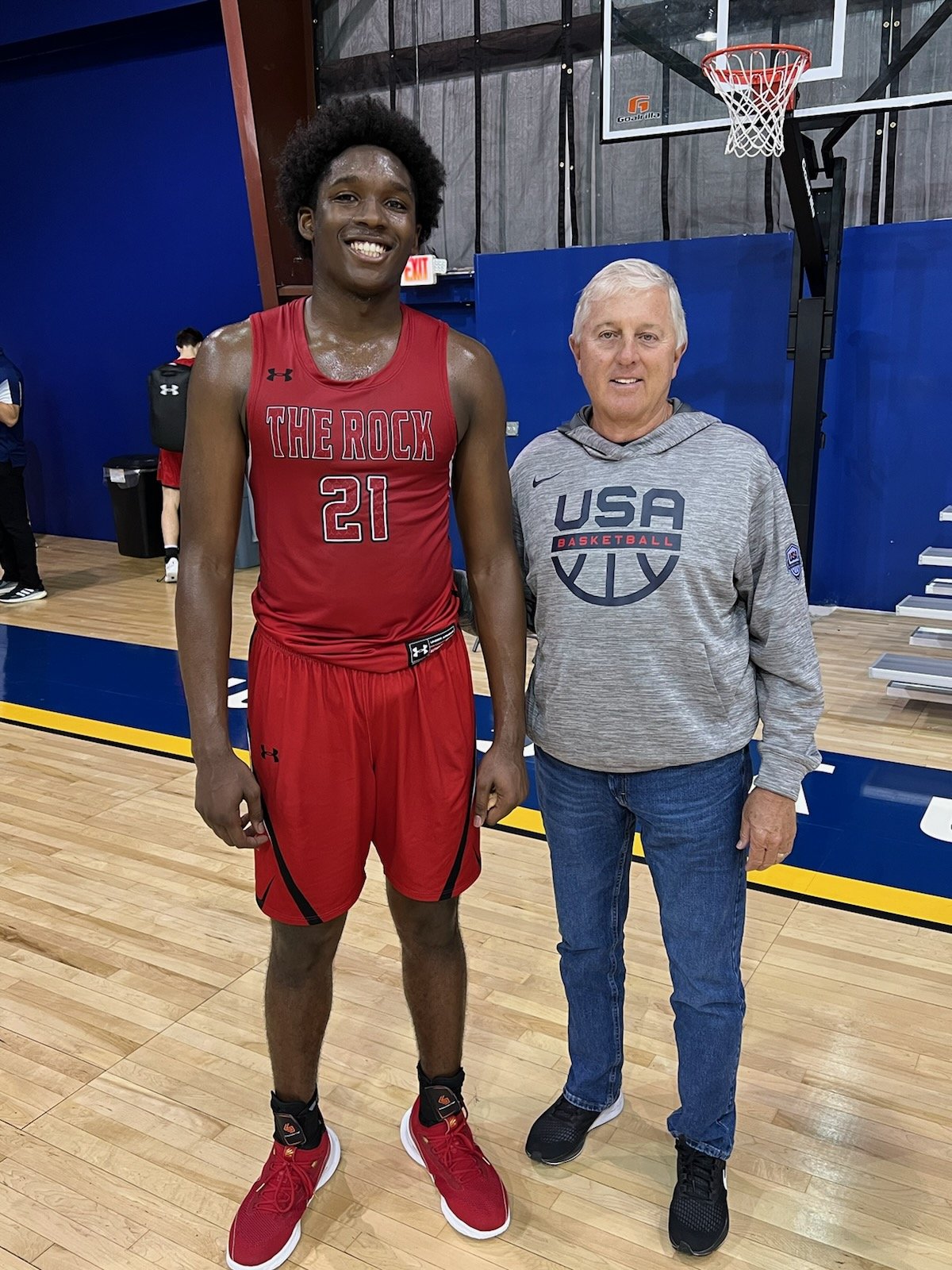 By ZACH SMART After an 18-point performance during a 66-52 win over Central Pointe Christian Academy in Kissimmee, Fla. on Tuesday, The Rock School’s 6-foot-9 Class of 2024 hybrid forward Ryan Jones Jr.  was quick to cite UNC and Kentucky as the schools in heaviest pursuit of him. “North Carolina and Kentucky, those are the main two that are recruiting me hard right now,” said Jones, who has developed a dependable 3-point shot and poses a unique mismatch threat in Florida’s loaded SIAA conference.  “I visited North Carolina two weeks ago. I talk to Orlando (Antigua) at Kentucky a lot. I’m also hearing from Cincinnati, Syracuse, Baylor and other programs in Texas,” added Jones, ranked No. 10 in the Class of 2024 by ESPN.com. Playing at The Rock School in Gainesville, Fla., the alma mater of Philadelphia 76ers star Joel Embid, Jones Jr. has transformed his game.
He’s rapidly emerged into a consistent 3-point shooter and hard-attacking forward, capable of scoring it off the dribble and overpowering defenders with his catch-and-post game. After helping lead the program to an 18-5 record during the 2020-21 campaign, Jones Jr. finds himself playing on the perimeter more than ever before.  Jones Jr. won a gold medal at the 2021 FIBA Americas U-16 Championship. During Team USA’s 6-0 title run, the 6-foot-9, 215-pound prospect put forth a memorable 16-point, four rebound showing against Mexico in the quarterfinals. The five-star recruit holds offers from NC State, Ole Miss, Illinois, and a bevy of others.  Though just a sophomore, Jones Jr. inherits a leadership role at The Rock. It is a new role, as he explained, one which will entail being more communicative as a focal point and locker room presence.  “Coach (Justin) Harden wants me to be vocal and talk way more,” Jones said. “At Team USA, we talk non-stop. So I’m going to bring what I did in USA over to my high school program. Offensively, I’ve been setting more ball screens for my teammates so I can get out. So doing that both ways, helping my teammates and helping myself.”  Follow Zach Smart on Twitter Follow Adam Zagoria on Twitter Follow ZAGSBLOGHoops on Instagram And Like ZAGS on Facebook