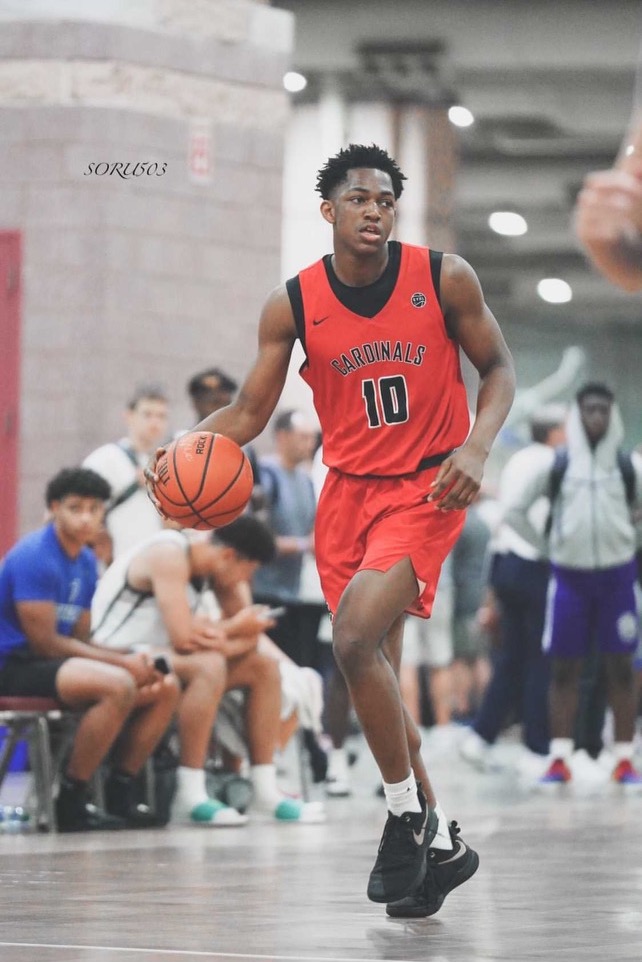 By JACOB POLACHECK Mouhamed Dioubate is establishing himself as a Top-125 prospect in the class of 2023, but despite having a number of high-major schools in pursuit, he’s not looking to commit anytime soon. “I’m just taking my time with this,” he said. “When it’s the right time, everyone will know the schools I’m interested in. I’ve just been taking my time with it.” The 6-foot-7, 215-pound power forward from Putnam Science (CT) Academy, burst onto the national radar this summer with a strong showing on the Nike EYBL with the PSA Cardinals. “Mo is one of the hardest playing guys to ever wear a PSA Cardinals uniform,” PSA Cardinals director Terrance “Munch” Williams said. “His ability to consistently finish with a double double each game is overlooked, but will help a college program win a national championship one day. He has always presented himself as a low-maintenance, high-production individual, and this program is lucky to have him.” With his strong play recently, Dioubate is hearing from schools such as Georgia Tech, UConn, Pitt, La Salle and Seton Hall with offers from George Washington and VCU. Despite being far from a decision, Dioubate made his first trip to a college campus recently, taking an unofficial visit to Houston in mid-September. “It was a cool experience,” he said. “The energy and the practice stood out. It was different. I enjoyed it.” And as he starts evaluating his interest, Dioubate says he’s looking for a school that will help him develop best into a better player. “I’m also looking for a school that I’ll fit at, where I have an important role,” he said. “That’s what I’m really thinking about. A school where I fit at, have an important role with the team and win.” Heading into his junior season at Putnam Science Academy, Dioubate is looking to improve every facet of his game from ball handling to shooting. “I’ve been working on my three point shooting. I’m a good 15-foot shooter already, so I’m working on my range,” he said. I’ve been picking up on it here, so that’s what I’ve been working on.” Follow Jacob Polacheck on Twitter Follow Adam Zagoria on Twitter Follow ZAGSBLOGHoops on Instagram And Like ZAGS on Facebook