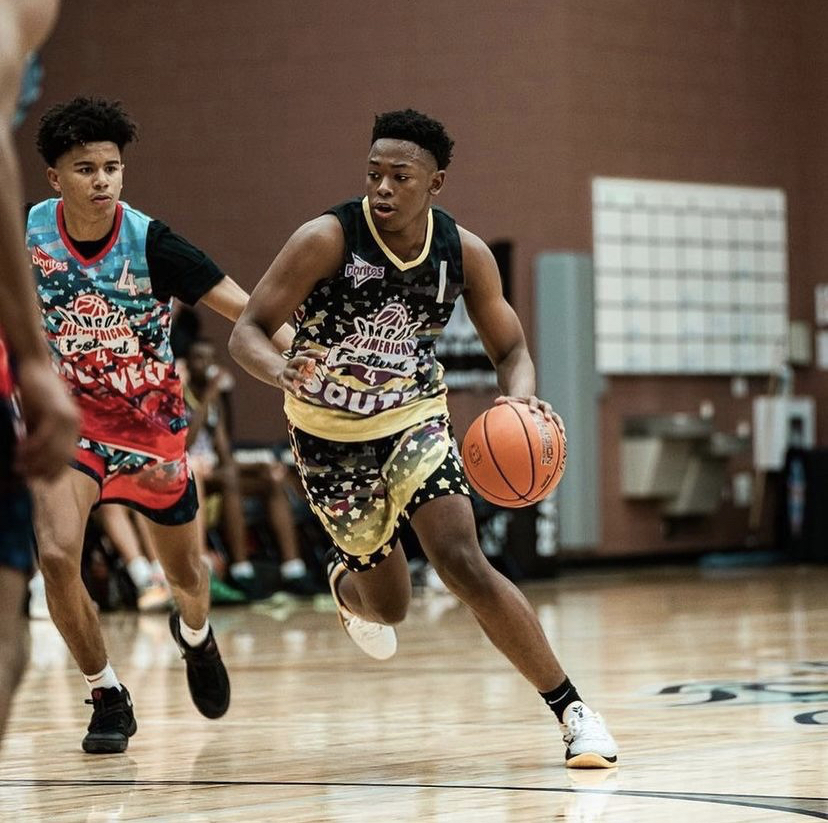 By TOBIAS BASS RJ Jones, the No. 38 overall prospect in the class of 2023, has set four upcoming visits over the next month, he tells ZAGSBLOG The 6-foot-3, 190-pound combo guard from John Paul II (TX), is set to visit Oklahoma State (Sept. 25), Texas A&M (Oct. 9), Texas Tech (Oct. 16) and TCU (Oct. 23). He is also in the process of planning visits to Saint Louis and USC. He broke down each school: Texas: “I like how they push the ball in order to go score and don’t like taking so much time.  I feel that I will be pushed more defensively at UT because of the way the staff values that side of the ball.” Texas Tech:  “I like how Texas Tech likes to run to score easy buckets and let their shorting guard and small forward to go and take advantage of their mismatches.” USC: “I like how USC enforces an inside/outside presence.  They allow guards to push the tempo and that fits my style of play.” Tulsa: “I love how chippy Tulsa is in both sides of the ball.  It feels like they have the attitude of giant slayers. I like that.” TCU:  “I like how TCU wants to maximize space on the floor and run an active offense.”  Saint Louis: “I like how Saint Louis plays after talking to coach (Phil) Forte and head coach (Travis Ford). They both said they let their guards have the green light, especially if you can shoot it.”  Texas A&M:  “l like how the Aggies play through their guards and holds everyone accountable.  I feel like they will let me play towards my strengths.” Virginia:  “Virginia has more of a slow-down pace in which I can thrive in a half court set and fit into the style of play.” Missouri: “I like how Missouri plays through their guards and relies on being tough on both sides of the ball.”  Oklahoma State: “I like how Oklahoma State plays because I like how they let their point guard initiate the offense and make the proper reads.”  Entering his junior year Jones is set to team up with five-star forward Liam McNeeley. With high expectations individually and team-wise, Jones believes him and McNeeley can be one of the best duos in the nation. College coaches have raved about Jones’ shot-making, hoping to use him as combo guard with a green light to shoot and an ability to initiate the offense. “My relationship with Liam is really good on and off the court and I do think we can be dominant because we are both have different skill sets that complement each other’s game,” Jones said. “We also have some really solid players on our roster that are dependable.” Despite being overlooked as a freshman, Jones has established himself as a Top-40 prospect nationally after a strong summer. “I’m not satisfied because I’m still competing for the number one spot,” he said. “The rankings motivate me in different ways and blaze my fire even more.” Jones had a standout performance at the Pangos All-American Camp in July, representing the South Region, and scoring 29 points on 8-for-15 from three-point range in his second game of the weekend. “It was a great experience for me to go out to Vegas and showcase my talent against top talent in the country of all grades,” he said. “The atmosphere was nice with a whole bunch of scouts there to evaluate players and select the players that show potential of having the biggest upsides.” Soon after, the Braswell (TX) native helped lead Drive Nation 16U to a EYBL Peach Jam Championship game berth were they lost to Team WhyNot in triple overtime. “I learned that when things start to get tough you have to maintain your composure,” he said. “I learned that each possession is very valuable and the fundamentals are what wins championship games.  That game has motivated me to get better everyday because it was the biggest game of the year and it slipped through our fingers. We are all motivated to go win Peach Jam next year.” Jones’ development can be somewhat attributed to his work with his father, Robert Jones, who played Division 1 basketball before a brief stint with the Los Angeles Clippers. “I didn’t receive any real guidance until my sophomore year in college,” Robert said. “I made some costly mistakes during my path and use my experience to help guide them through their processes.” Follow Tobias Bass on Twitter Follow Adam Zagoria on Twitter Follow ZAGSBLOGHoops on Instagram And Like ZAGS on Facebook