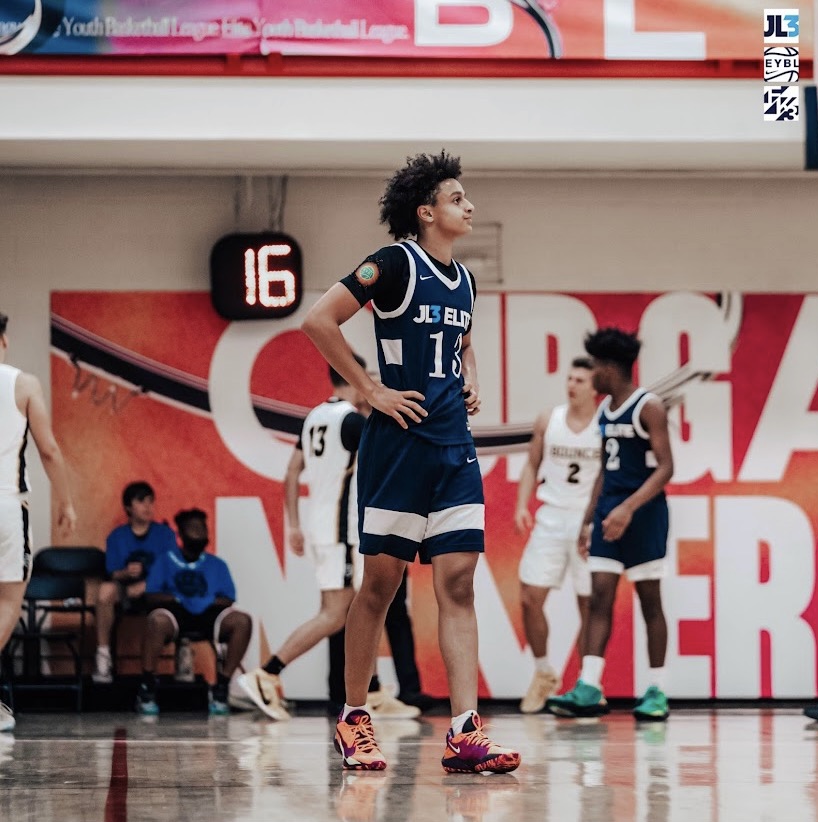 By TOBIAS BASS Class of 2023 guard Nazar Mahmoud was one of the brightest stars during the Nike EYBL Peach Jam and the summer live evaluation period. The 6-foot-5, 180 pound guard from Leander (TX) averaged 11 points, three rebounds, and shot 58 percent from three point range during Peach Jam. In his first showing in front of college coaches in more than a year, Mahmoud was able to showcase his elite three-point shooting and more. “I showed coaches I am one of the shooters in the country hands down,” he said. “I have been able to facilitate for my teammates a little bit, and can handle the ball, because I believe I’m one of the best combo guards in the country.” As one of the most underrated prospects in the nation, it wasn’t until this month that Mahmoud received his first Division 1 offer on a call with TCU. “It was so surreal especially coming from a Big 12,” he said. “It was a three-way call with my brother and assistant coach Duane Broussard. I was extremely happy and blessed, but after the phone call I went straight back to work.” This summer, Mahmoud has heard from the likes of Incarnate Word, Wyoming, LA Tech, Duquesne, St Louis, Oakland, Wyoming, Grand Canyon, Sam Houston, Northeastern, Washington State, Arkansas and Butler. “The coaches see me as being a very offensive threat and can plug me in almost everywhere,” he said. “And they see me fitting into their program.” He broke down each school: Sam Houston State: “I liked how they said I would fit into their program , and they liked how I said all the right thing for my responses.” TCU: “They were really interested in me. I liked how they were the first to offer to start my recruiting, it shows what type of school they are and how much they like me. They are going to be recruiting me heavily. I’m planning on visiting them near the end of the month.” Rice: “They are a great school. When I went to their camp they liked how I was shooting the rock and just doing what I do best.” Washington State: “I like the school a lot, a PAC 12 school. If I go there I feel like I can turn the program around, and make an impact something like Klay Thompson did.” Northeastern: “I like the school and what they are doing up there in Boston. Coach Joel Smith is really interested. Him and I are both from Leander, which is pretty rare. So I’m glad that we have something in common.” Texas State: “Texas State is not too far from home, they are a good school and like what they are doing in San Marcos.” Arkansas: “I like the program a lot, I like how they are recruiting me . They think I will fit very well and can make an impact right away because they play freshman and does very well with them. Just look at Moses Moody for example. Coach Ronnie Brewer is a great guy and likes my character, and will be recruiting me heavy.” LA Tech: “I like LA Tech a lot, they were one of the first schools to be in my phone. I went to their camp and just built a relationship from there. Coach Josten Crow and Coach Desmond Hayman are great guys. I like what they are doing with Kenneth Lofton a lot. And hope to build a further relationship with them.” UTSA: “I like UTSA, because they see me as being a huge asset for their program and doing a lot. They like me a lot, I like the Head Coach Steve Henson and Coach Adam Hood. They are not too far from home. They have two players right now from the past season in the G league right now.” During the first week of the Nike EYBL, playing for Team JL3, Mahmoud helped lead his squad to a 7-0 start, including wins over Team CP3 and Bradley Beal Elite. “We were really successful and I’m proud of my team. The whole team is extremely talented, but we all bought in and played our role and just do what we do best,” he said. “Nobody wasn’t trying to do something they couldn’t do. Coach Alex and Coach Ant and Brooks played a huge role too. They let us play basketball and showcase our skills.” Among Mahmoud’s greatest influences includes his older brother, (Ziad Mahmoud), as the two have spent countless hours in the gym together while also navigating the recruiting process. “He’s the one that talks to coaches, takes me tournaments, takes me to practices, trains me too,” Mahmoud said. “He criticizes me about my game and tells me what I do good and bad, after each tournament or even after the game we always work on what I was struggling with.” With the high school season on the way, Mahmoud is certainly a recruit to keep an eye on in the state of Texas. “I’ve been through a lot,” he said. “It all started in seventh grade I thought I was so good because of school ball, but then I hopped into AAU and got exposed. Ever since then I put my head down and worked extremely hard. “I had to make so many sacrifices to get to where I’m at, but it’s all worth it in the end. I came a long way and thats because Gods timing is the best timing.” Follow Tobias Bass on Twitter Follow Adam Zagoria on Twitter Follow ZAGSBLOGHoops on Instagram And Like ZAGS on Facebook