Ron Holland, the No. 9 overall prospect in the class of 2023, planning visits after breakout summer | Zagsblog
Follow @adamzagoria 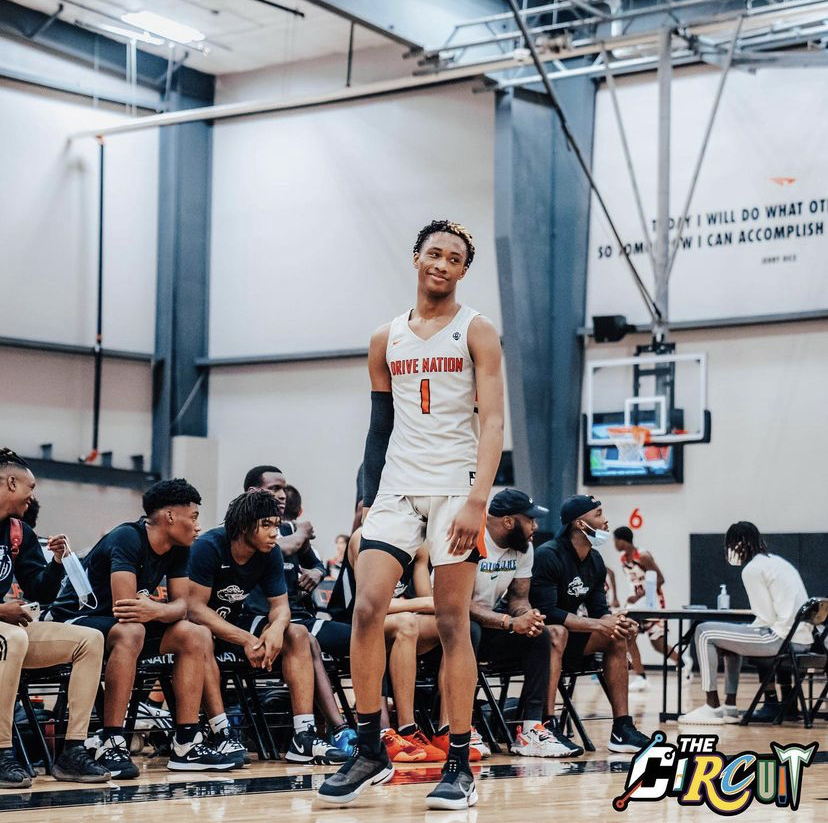 By TOBIAS BASS Ronald Holland, the No. 9 overall prospect in the class of 2023, has turned a lot of heads after a dominant Nike EYBL Peach Jam 16U championship game performance. In a triple overtime loss to Team WhyNot, Holland finished with 25 points and 15 rebounds for Drive Nation. Holland earned first-team Nike EYBL honors after averaging 18.2 points, 8.3 rebounds, 1.5 assists, and 1.0 steal per game. “Our success was because of how the coaches and us as players held not only ourselves accountable but each other as well,” he said. “We have an amazing coaching staff. They make sure we are doing everything we could to keep our bodies afloat to be prepared for the next game and to win. “Most of us have been playing with each other since 7th or 8th grade. We’re brothers, we learn from each other. We feed off one another’s energy. We pick each other up when one is down. That’s our rule. That’s our game.” The 6-foot-9, 200 pound forward from Duncanville (TX) is arguably the hardest playing prospect in the country, giving 100 percent night in and night out. “My passion for the game is from me knowing that one day my success will give not only me, but my family the opportunity to live life to it’s fullest without the stress of knowing where our next meal will come from or if there’s money for the bills,” he said. “I don’t want to see my parents live check to check no more than the next student athlete does. “My family pushes me hard on and off the court. My parents and my sister do an outstanding job of holding me accountable not only in basketball, but with my schoolwork and household chores as well. Every time I step foot on the court it’s for them and I would never let them down.” Without any visits under his belt, Holland is looking to plan several visits, hearing from a number of programs daily. “I plan on visiting most of the schools that offer or will offer in the future: Memphis, Tennessee State, Arkansas, SMU, Texas A&M, Texas Tech just to name a few,” he said. “I’ve also heard from TCU, Missouri, UCLA, Georgia, Iowa State, and Oregon.”  When it comes to finding the right program, Holland is looking for a fast-paced team that can play in the fast break. “My best game is based off pushing in transition, making the right reads, and running the floor,” he said. “I want to be able to build a trustworthy relationship on and off the court, including with the players. “I want a coach to instill discipline and understand the different personalities,” he said.  “Involvement from everyone in the program. I am going to give them 110 percent of me and more every time, every game. Communication is critical in every aspect. Last but not the least, player development. I want to continue to learn and grow.” With July seeing the dead period lifted for the first time in over a year, this summer was the first opportunity for many coaches to see Holland play in-person, as Holland showed of his rebounding ability, high-motor and leadership skills. “I will talk to my team to get us going,” he said.  “I play with a lot of passion. I want people, especially coaches, to know that my passion may appear to be crazy. It’s not, it’s pure innocence. I want to be great. I want to win.” Holland is one of the most decorated players in all of grassroots basketball having won two state championships, being selected to the Team USA 16U team and being recognized as a consensus top-10 recruit. Still, Holland knows the job isn’t done. “I am not satisfied,” he said. “I have won a lot of games and I feel good about it.  It is one step closer to my overall dream of playing in the NBA.  I won’t stop until I get there with my family right beside me.” Behind every great player there is a great coach that has groomed them the right way and helped them develop into a star. For Holland, that mentor is Duncanville head coach David Peavy. “Coach Peavy and I, we just connect on a whole different level,” Holland said. “We have so much in common. His standards for me are almost impossible but he believes in me, and he knows I can get the job done,” he said. “The only thing he wants from me is to trust him, get out of my own way, and always, always find a way to get better.  He coaches how I like to play.  He is one of the many reasons for my success as well.” And after another stellar year at Duncanville for the 2020-21 season, Holland participated with the Team USA U-16 team alongside some of the best players in the nation. “I have always heard the phrase ‘closed mouths don’t get fed.’ During the mini camp in May, I know I wasn’t going to know everything.” he said. “I had to ask questions to grasp exactly what they were asking or wanted me to do to make the team. “It is a great experience and an honor to be a part of such a high-profile program. I can’t wait to get back with them this August to show them that I have been working on what they have proposed. The coaching staff with USAB is amazing. I am glad and again honored to have them coaching me.” Follow Tobias Bass on Twitter Follow Adam Zagoria on Twitter Follow ZAGSBLOGHoops on Instagram And Like ZAGS on Facebook