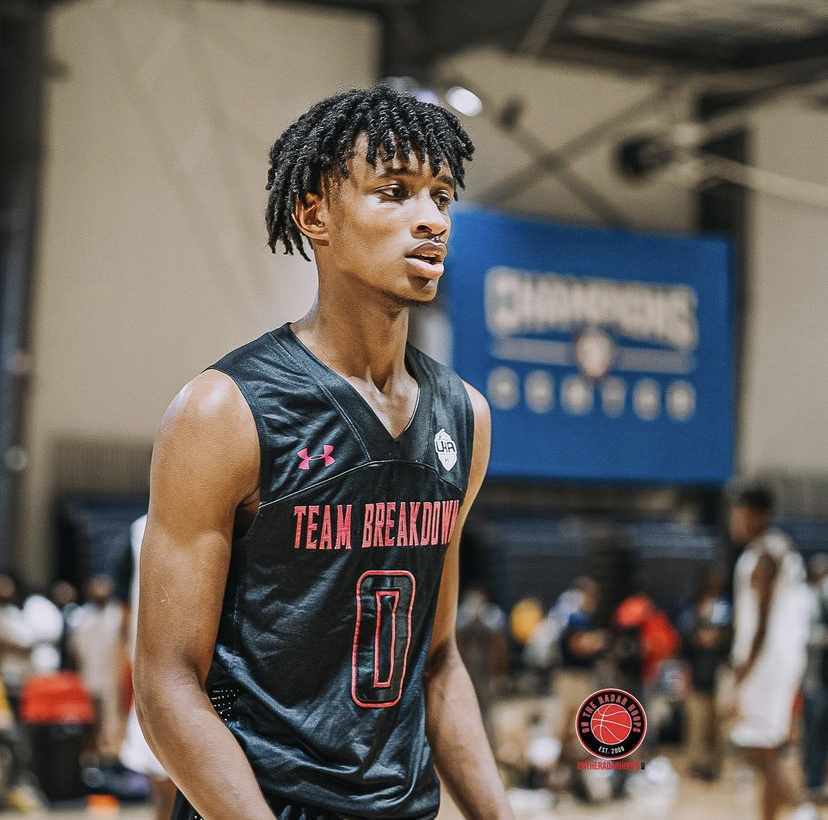 By TOBIAS BASS Kris Parker, the No. 29 overall prospect in the class of 2023, has displayed an array of skills on both ends of the floor throughout the summer live period. The 6-foot-8, 170 pound combo-guard from Quincy (FL) and the Team Breakdown AAU Program, was able to display his ability in front of college coaches despite battling through multiple injuries. “I believe I showcased not only my able to score, but (my ability to) pass, rebound, defend and do whatever it took to win,” he said. At 6-foot-8, 170-pound, Parker is matchup nightmare for opposing defenses. “Parker is an intriguing prospect,” ESPN National Recruiting Director Paul Biancardi said via Twitter. “Excellent length and ball skills for quick drives and jumpers. He utilizes his frame, creating for himself, as a playmaker for others and as a defender.” Throughout this summer, coaches have raved about Parker’s length, ability to initiate offense and score on three levels. “Being able to use your length is a big part of basketball, especially on the defensive end,” he said. “Being able to score in a variety of ways it frees up your teammates and gets them easier and quicker buckets with all the attention on you.” Ranked by ESPN.com as the No. 2 player from the state of Florida, Parker is hearing from UCF, Ohio State, Auburn, Missouri, Maryland, Texas Tech, and Kentucky. He plans on visiting Florida and Ole Miss in the fall. “I’m looking to see how I would fit in the coaches system and whether or not it will help me get to the next level,” he said. Parker broke down each school:                     Florida: “They play an uptempo fast pace game, The coach says I would strive in their transition offense.” Florida State: “Every year they have 2-3 players in the draft and that’s my ultimate goal, I talk to the coaches a lot about how they’re going to help develop me for the league and also how they want to show that I can defend 1-4s.” Kansas State: “They play an intense brand of defense that’s very exciting to me, they seem to be very interested in me.”  Ole Miss: “They’re a very offensively dangerous team, and the coaches say I would fit into the system well.” Detroit-Mercy: “Detroit seems to be the sleepers in a lot of game and upset a handful of teams.”  Kentucky: “Coach (John Calipari) is an outstanding coach and he’s been around for a while so he knows what he’s doing.” Parker’s AAU teammate with Team Breakdown, four-star guard Kolby King, announced his commitment to St. John’s on Monday. “I’m extremely excited for Kolby,” he said. “He deserves everything that comes his way because he worked for it. That’s my guy, we were together 24/7 this summer. “After my injury, when I came back my teammates started to really see that I was there for them as long as they had my back too, so once we gelled it was history.” Follow Tobias Bass on Twitter Follow Adam Zagoria on Twitter Follow ZAGSBLOGHoops on Instagram And Like ZAGS on Facebook