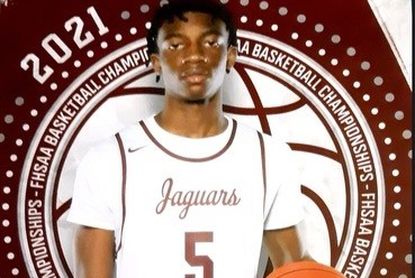 By JACOB POLACHECK Kolby King, the 6-foot-2, 170-pound guard from Pembroke Pines (FL) Charter and the Team Breakdown AAU Program, has committed to St. John’s, he announced Monday via Twitter. “What made me pick St. John’s is that, first, they are family,” King said. “They make me feel at home and their style of play is very much like mine. Also, the speed of the game they play at and the aggression that they play with is exciting.” King chose St. John’s over offers from Appalachian State, FIU, Florida Atlanta, Georgia Southern, Middle Tennessee State, Murray State and Texas Tech, among others. “Kolby’s tenacious defense, scoring, and gritty toughness is perfect for coach (Mike) Anderson‘s style of play at St John’s,” Team Breakdown coach Kenny Gillion said. Added Pembroke Pines Charter coach Dave Roca: “With Kolby, you’re getting a hard-nosed two-way player that can score it form all three levels.” Follow Jacob Polacheck on Twitter Follow Adam Zagoria on Twitter Follow ZAGSBLOGHoops on Instagram And Like ZAGS on Facebook