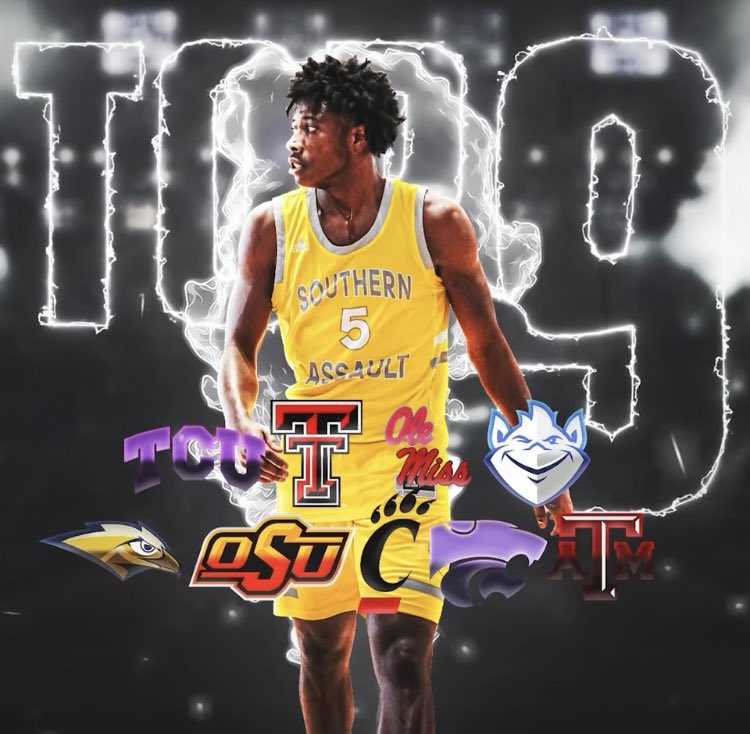 By JACOB POLACHECK & ADAM ZAGORIA Quion Williams, the 6-foot-4 small forward from Mansfield (TX) Legacy, announced his top nine schools and broke them down with ZAGSBLOG. Ranked by 247Sports as the No. 33 small forward and the No. 137 overall prospect in 2022, Williams is down to Oklahoma State, Texas A&M, Oral Roberts, Saint Louis, TCU, Texas Tech, Cincinnati, Ole Miss and Kansas State. “I wouldn’t say I had a lot of offers, but I had a decent amount of offers,” he said. “These schools right here, they stick out to me because they’re going to play me as a guard. Other schools talked a lot about me playing on the wing and in transition, but I’m not going to grow anymore. I’m not going to get any taller, so I feel like these are the schools right here that are going to showcase my ability to be a guard.” Oklahoma State: “I just like how coach Mike (Boynton) and coach Terrence (Rencher) are recruiting me. Those two are recruiting me heavily.” Texas A&M: “Coach Buzz (Williams), it’s just about life lessons with him. I’ve seen the campus, but when I got there, it wasn’t just all about basketball. It was about life after basketball. That’s what stood out a lot.” Oral Roberts: “I would say the freedom they gave Max Abmas. If you were to change me and him positionally, they wouldn’t make it as high as they went, but they would get there. Because of my ability to score and set my teammates up, we would get far with it.” Saint Louis: “Coach Phil (Forte) has been everywhere with me. He’s been at every tournament. He’s always courtside at every tournament ever since coaches were able to come back. Him and coach (Travis) Ford have been recruiting.” TCU: “The overall communication changed a lot. It went from them calling every once in a while to them calling every day. The overall pitch is still the same, but they’re recruiting me heavier. “It changed a lot. At the time I said that [about not hearing much from them], USA Basketball was going on for the U-19’s. That took a lot of it. I wouldn’t say that took a toll, but it wasn’t as heavy because all the coaches were busy with the USA Team.” Texas Tech: “Coach (Corey) Williams is a good dude. They’re recruiting me heavy. All the schools on the list are recruiting me heavy.” Cincinnati: “They’re the only collegiate level basketball team in the area, so the fans and the atmosphere (stand out).” Ole Miss: “The atmosphere there, it’s unbeatable. I haven’t visited, but I know someone that transferred there last year. She played her sophomore year there and I watched the games. The atmosphere there was crazy.” Kansas State: “The coach there is about winning. When he was with Illinois, he produced pro players and has a winning mindset as a coach. He’s been winning, so I feel like he would be a great fit for me. He likes to win and I like to win.” Williams is looking to take visits soon and has already visited Oral Roberts, Oklahoma State and Texas A&M, “I don’t know if I’m going to revisit the schools I’ve already seen or if I’m going to visit the schools I haven’t yet,” he said. “I’m going to talk with my uncle about that.” As for what he’s looking for in a school, he said: “All the coaches are trying to build a relationship with me right now. I really can’t say that’s not there because when the coaches hit me they’re asking me about more than just basketball. They’re asking me about life. I feel like the relationship is there and they’re trying to build it.” Follow Jacob Polacheck on Twitter Follow Adam Zagoria on Twitter Follow ZAGSBLOGHoops on Instagram And Like ZAGS on Facebook