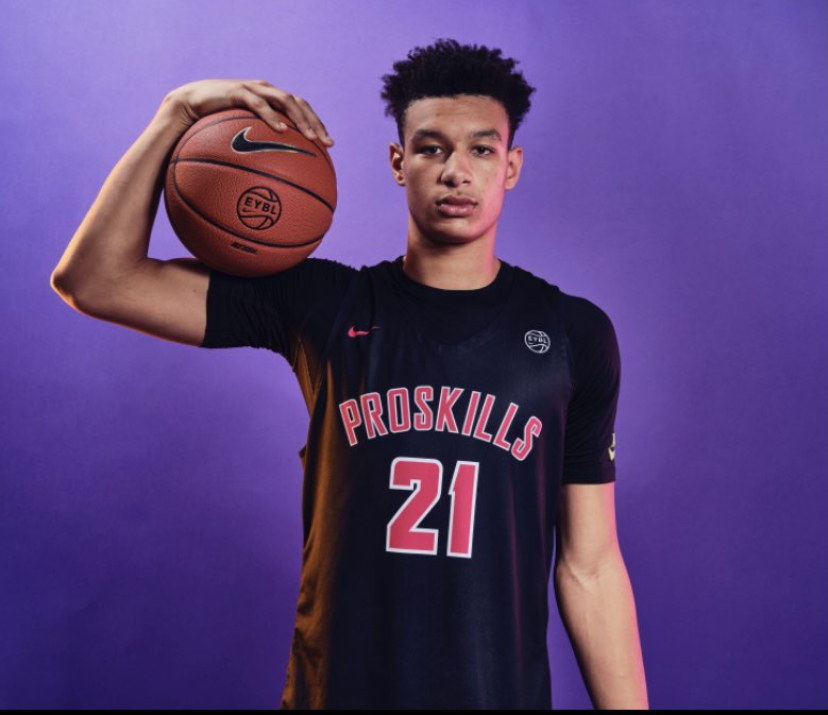 By TOBIAS BASS There were a number of prospects that helped boost their stock at this year’s Nike EYBL Peach Jam Tournament and class of 2022 forward KyeRon Lindsay was among those leading the pack. The 6-foot-7, 205 pound forward from Denton (TX) and the Nike Pro Skills AAU Program, picked up 10 offers while in North Augusta, SC this week, including Marquette, Xavier, TCU, Tennessee, Texas A&M, St. Louis, Tulsa, UNLV, Oklahoma State, and UTEP. Lindsay is also hearing from DePaul, Georgia, Florida, and Nicholls State. Lindsay was a major catalyst for ProSkills’ 12-0 start on the circuit, largely due to the team’s camaraderie. “I think we where successful because we never quit even when down,” he said. “Having two-a-days helped a lot. With it being a long trip and playing everyday, we where physically and mentally ready and we where just having fun while doing it. “The team was super close and great friends. We would have team meetings every night before games and just talked and got closer and that moved onto the court.” Lindsay was named the Breakout Player of the EYBL Session through the first week after averaging 16.3 points, 8.7 rebounds, 2 assists, 1.3 steals, and 1.6 blocks per game. Yet, just two years ago the Denton, Texas native wasn’t get recruited like he wanted to. “I didn’t really expect to get to this point because my sophomore year , I wasn’t getting looked at like my other basketball friends were,” he said. “I was kind of defeated, but I just put my head down and worked my butt off. It just feels good to have the opportunity to show and use all my hard work pay off. “I’m just glad I was able to go out on the big stage and not (only) prove people wrong, but prove myself right.” When it comes to his recruitment, Lindsay has already taken unofficial visits to Texas-Arlington and UTSA. “(Texas-Arlington) was fun,” he said. “I watched practice and saw the gyms and facilities like every other visit.” “The UTSA visit was fun because we walked around the campus and talked about the new facilities they are constructing then,” he said. “I played pick up against their players so that was a great experience especially playing with Division 1 athletes. and I also plan on visiting OSU and UNLV but haven’t figured out dates yet.” He is currently planning visits to Oklahoma State and UNLV. In a few weeks, Lindsay will announce his top five schools. “With the coaching and program, (I’m looking for) a family environment and great player development,” he said. ProSkills EYBL caught a lot of teams and national media off guard after they beat the soon-to-be champions Team Final on day one. Several of their players including Cason Wallace, DJ Smith, Jalen Reed, and Jordan Mason received several Division 1 offers during the trip. Wallace was named MVP of the first session and picked up a Kentucky offer. “It made me happy like I said we where all close,” Lindsay said. “We where all hyped about Jalen Reed, Jordan Mason, Cason, and DJ Smith for getting more opportunities to play at another level and seeing that all the hours we spent working in and outside of practices are paying off.” For Lindsay this was a business trip. He planned on showing scouts what he could bring to the table. “I feel like I showed coaches that I don’t back down from competition, I like to compete, I have a high motor and versatility,” he said ” I think my best personal moment was just the whole trip and event itself because it was my senior and I wouldn’t want to change it for anything, like going in and not being expected to make it out of the first pool to becoming a fan favorite at Peach Jam.” Follow Tobias Bass on Twitter Follow Adam Zagoria on Twitter Follow ZAGSBLOGHoops on Instagram And Like ZAGS on Facebook