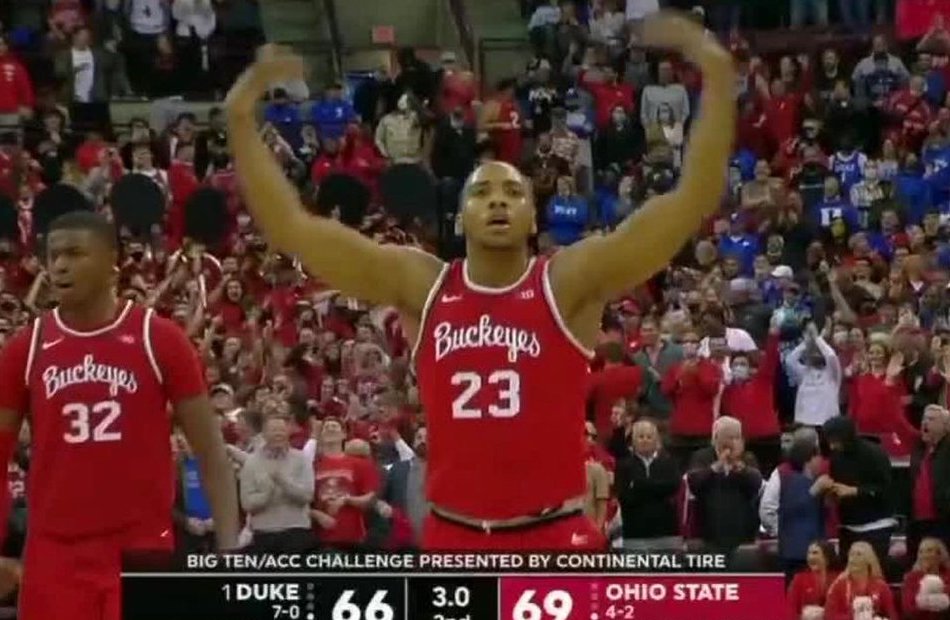 After losing the Gavitt Games against the Big East Conference, the Big Ten rebounded to capture the ACC/Big Ten Challenge. The Big Ten was handled pretty clearly by the Big East (6-2) but came back to knock off the ACC 8-6 to win the Challenge for the third straight season. The high point of the matchup was Ohio State’s 71-66 upset of No. 1 Duke on Tuesday night. That paved the way for No. 2 Purdue to ascend to the No. 1 spot on Monday assuming they knock off a high-octane Iowa club Friday night in the Big Ten opener. Entering Wednesday, the Big Ten had a commanding 6-2 lead but the ACC picked up victories by N.C. State, Virginia Tech, Miami and North Carolina to close the gap before Wisconsin edged Georgia Tech for the final margin. No. 23 Michigan State also beat Louisville. Michigan, which was as high as No. 4 in the poll this season, lost for the third time in five games when it was hammered at UNC, 72-51, behind 22 points from Caleb Love. The Big Ten captured the 2020 Challenge with a 7-5 record, marking the second year in a row that the Big Ten bested the ACC. In 2019, the Big Ten won the Challenge with an overall record of 8-6. The ACC leads the all-time series 18-15-3, with its last victory coming in 2017. The Big Ten has won eight of the last 13 Challenges dating back to 2009, with the ACC emerging victorious in 2016 and 2017, and the conferences splitting the Challenge three times (2012, 2013 and 2018). Here are this year’s results: