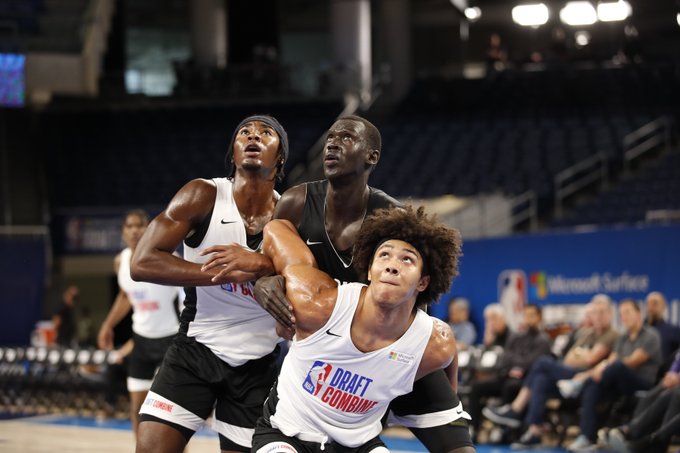 By ZACH SMART Makur Maker was viewed as a trailblazer, as one of the nation’s most hotly pursued recruits who took the harder and less popular route. He was the first ever five star prospect to commit to an HBCU program when he made a verbal pledge to Howard and head coach Kenny Blakeney in 2020. Maker made a statement with the commitment, choosing the Bison over a number of high major programs, a list which included UCLA and Kentucky.  And while Maker’s decision brought national visibility to Howard, his success at the program was short lived. Playing despite an injury, Maker logged just 48 minutes in two games, posting averages of 11.5 points and 6.0 rebounds. Howard ended up cancelling the season due to COVID after just five total games, as the heavy anticipation of what could be suddenly fizzled. The NBA Combine became the perfect proving ground for the 6-foot-11, 235-pound power forward to prove his NBA value. Maker turned in an eye opening performance during live action yesterday, earning plaudits from ESPN’s Jay Bilas and LaPhonso Ellis for his timely passing and footwork. “His upside is high and he is a guy who is going to work and play within the team,” Maker’s guardian Ed Smith said. “He didn’t play a lot last year, but he was ready to go. He still got to practice a full season. He wants to play the right way and he’s a guy who is willing to learn.” Helping to accelerate Maker’s league readiness and pre-Draft production rate has been former NBA player Darren Collison, who played in the league for 10 seasons. Maker trained with Collison during the spring, grinding on a schedule complete with workouts, film sessions and conditioning. “It was unique experience because throughout his NBA career,” Smith said. “Darren played with a lot of guys who are similar to Makur.” The NBA concepts ingrained in Makur translated to the Combine. Makur made some heads up plays and displayed a feathery touch with efficiency at the free throw line as well. The Combine was a significant stage for Makur, who is ready to prove himself after just a small, corona-truncated sample size at Howard. “I know that I’m good,” Makur said in an interview with Jerry Brewer of the Washington Post. “I know if we close the gym, I know that I’m going to compete, and I’m going to be the best player walking out. People don’t really look at it like that. “So if you look at it and say that I played two games and I didn’t bring what I wanted to bring to Howard, that’s that. I can’t change your mind, but you have to come see me in person. You’ve got to see me play, and that’s definitely going to happen. And I’ll be ready to show you who I am.” Follow Zach Smart on Twitter Follow Adam Zagoria on Twitter Follow ZAGSBLOGHoops on Instagram And Like ZAGS on Facebook