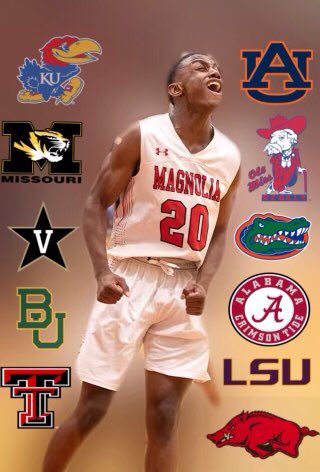 By JACOB POLACHECK Four-star combo guard Derrian Ford is considered on of the top guards in the class of 2022, with an extended shooting range and ability attack the rim. “I’m a winner, a scorer, a leader, a hard worker and a student of the game,” he said in an interview with ZAGSBLOG Sunday. The 6-foot-3, 190-pound combo guard from Magnolia (AR), is ranked by 247Sports.com as the No. 9 combo guard and No. 48 overall prospect in the class of 2022. Ford took his first official visit to Arkansas earlier this month (June 1-3). “The visit was amazing,” Ford said. “I got to talk to all the coaches and I hadn’t talked to them since ninth grade, right after I got an offer from Baylor. “I’ve been building a relationship with coach [Eric] Musselman. He’s a great person. I got to go up there and visit, watch the practices, students daily lives and it was just a great experience overall. All of the coaches that are on the staff right now are about more than just basketball. They want the best for their players on and off the court and they’re very straightforward with them. It’s a great school, a great program and it was just an amazing overall visit.” The 6-foot-3, 190-pound combo guard from Magnolia (AR), is also considering Kansas, Baylor, Texas Tech, Missouri, Vanderbilt, Auburn, Ole Miss, Florida, Alabama and LSU. He broke down each school for ZAGSBLOG Sunday: Kansas: “They are very interested in me and we’ve always stayed in touch. They’re a great program and it seems like they just want to help me build, develop me as a player and build a relationship. Even though I haven’t gotten to visit Kansas or have a Zoom meeting with them, I’ve been talking to coach [Norm] Roberts at least two times a week. He always texts me. Me and him just stay in touch a lot.” Baylor: “That was my first offer in eighth grade. We’ve always stayed in touch. Even before I got the offer, they would talk to me. They were talking to me at the camp because I went to a camp there. That was even before I was getting offers. They’re just a great program with great coaches and I’ve built a great relationship with them.” Texas Tech: “Coach Corey [Williams] from Arkansas just moved over there. I’ve built a relationship with coach Corey because I always talked to him a lot when he was at Arkansas and we’ve built a relationship more than basketball. I just talked to coach [Mark] Adams, the head coach there. I haven’t had the chance to visit, but I’ve been talking to coach Corey for a good minute and I’ve built a great relationship with him. I want to keep building that relationship.” Missouri: “I talk to coach [Cuonzo] Martin. I talk to coach [Marco] Harris-[Stevens]. They’re just great people. I had a Zoom meeting with them. They’re very interested, appreciative. It seems like they want the best for their players on and off the court. They’re very straightforward with their players, so I like that about coach Martin and his coaching staff.” Vanderbilt: “Talking to coach [Jerry] Stackhouse and coach Faragi [Phillips], they’re great people. I got to visit there on an unofficial visit and it was just a great experience. It’s a great town, a great place. Learning from an NBA vet is a great experience and coach Stackhouse has a lot of great tools to develop players.” Auburn: “I’ve been talking to coach Bruce Pearl and coach Wes Flanigan for a long time. Coach Wes is from Arkansas, I think. His son played at Parkview and now he’s at Auburn. They’re just great people. If you know coach Bruce Pearl, he always wants the best for his players and pushes them to their highest limits.” Ole Miss: “I talk to coach Kermit Davis and he’s a great person overall. I had a great Zoom meeting with him and the coaching staff. I got to see how the place looks. They’re great people overall. We’ve been talking a bunch and building a great relationship. I look forward to building a relationship with them until decision time.” Florida: “I talk to coach [Al] Pinkins and coach [Mike] White. Those are two great coaches. They always try to show love even if the people aren’t from Florida. They’ve just been showing a lot of interest in me and I can’t thank them enough for that.” Alabama: “I talk to coach Nate Oats, coach [Charlie] Henry and coach [Antoine] Pettway. Those are three great coaches. When I went up there for an unofficial visit, I got to watch the LSU-Alabama game. Those coaches are about more than just basketball. I really had a great time with them. They showed me a lot of things that could happen if I were to come to their school. I was just happy to be there and they just showed me an amazing time.” LSU: “They came in a little late, but building a relationship with coach [Will] Wade, he talks to me everyday. He called and it felt like we’ve been getting to know each other for more than 10 years. I’ve built a great relationship with coach Wade. He’s a great person. I look forward to keeping a good relationship with him.” Ford has no upcoming visits planned.  “I’ve been so busy,” he said. “But I’m sure once I talk to my family we’ll get to where my next visit will be.” When making his college decision, Ford is looking at a number of factors, including system and play style. “Will it fit into my game? Will the coaches be straightforward with me? Will the program develop me as a player? Will this place feel like home?” Ford asked. “Those are just a few things I’m paying attention to when I’m going to these schools.” Follow Jacob Polacheck on Twitter Follow Adam Zagoria on Twitter Follow ZAGSBLOGHoops on Instagram And Like ZAGS on Facebook