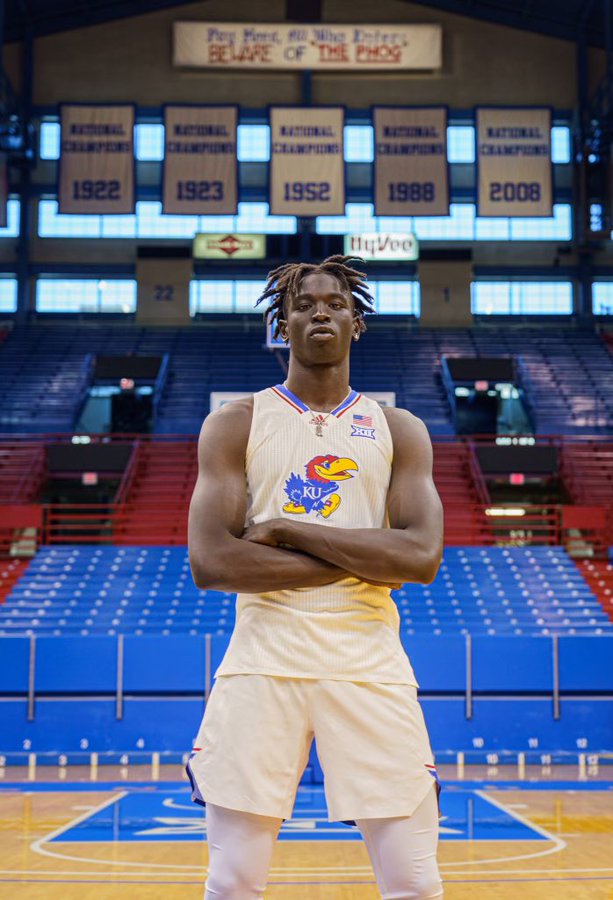 By JACOB POLACHECK In a huge recruiting weekend for the University of Kansas, class of 2023 five-star forward Omaha Biliew took an unofficial trip to Lawrence on Saturday. “Man, it was unbelievable,” Biliew told ZAGSBLOG Sunday. “It’s Kansas. Everything about it. Bill Self, great dude. That’s one of the blue-blood schools that I’m glad I got first. It was unbelievable. Great coaches, great facilities.” Biliew, a 6-foot-8, 200-pound power forward from Waukee, IA, is ranked by 247Sports.com as the No. 2 power forward and No. 5 overall prospect in the class of 2023. “I’ll be the face of Kansas,” Biliew said of the Jayhawks’ pitch. “I would be the poster child. I’d get the keys from this program. “The pitch was that you can get anything here from any other school, but you’re special and if you came here, everything is here for you. It was a great conversation and I’m glad I had a good talk with him.” Biliew received an offer from Kansas on January 13. He will return to campus on October 1. “Coach Self, he’s a real good dude,” Biliew said. “We’re talking on a personal level and he was just telling me all about the program. It’s something that you expect highly from a blue-blood.” Next up for Biliew is an unofficial visit to Iowa State on Wednesday. “T.J. [Otzelberger], he’s a really good coach,” Biliew said. “He’s a real good dude. Iowa State speaks for itself. They’re a real good program with a lot of success. “It’s Hilton Coliseum. I’ve never been there yet, but I’m glad I’ll get the chance to experience that on Wednesday. I can’t wait to be around that.” Biliew recently announced his intentions to transfer to Montverde (FL) Academy for his junior season. He has previously taken unofficial visits to Nebraska (June 6) and Iowa (June 7). “[I’m looking for] a really a good foundation with the coaches and someone that I can really trust,” Biliew said. “Someone that I can put my career in their hands and they’ll know how to lead me. “Then, just giving me the keys to do my thing so I can build myself into being what I want to be in the future, a pro basketball player, a real good one.” Biliew also said that fan bases will play a big role in his decision. “That’s what I’m looking for and that’s what will decide if I’m going to college or not,” he said. “The big thing is just trust.” Biliew wasn’t the only top-rated recruit on Kansas’ campus this weekend, as the Jayhawks also hosted five-star junior Chris Livingston for his first official visit. Kansas also hosted 2023 four-star combo guard Bryson Warren for an unofficial visit on Sunday. Livingston, a 6-foot-6, 200-pound small forward from Akron (OH) Butchtel, is currently considering KU, Kentucky, North Carolina, Memphis, LSU, Ohio State, Georgetown, Tennessee State, Florida, Alabama and the Overtime Elite League. Follow Jacob Polacheck on Twitter Follow Adam Zagoria on Twitter Follow ZAGSBLOGHoops on Instagram And Like ZAGS on Facebook