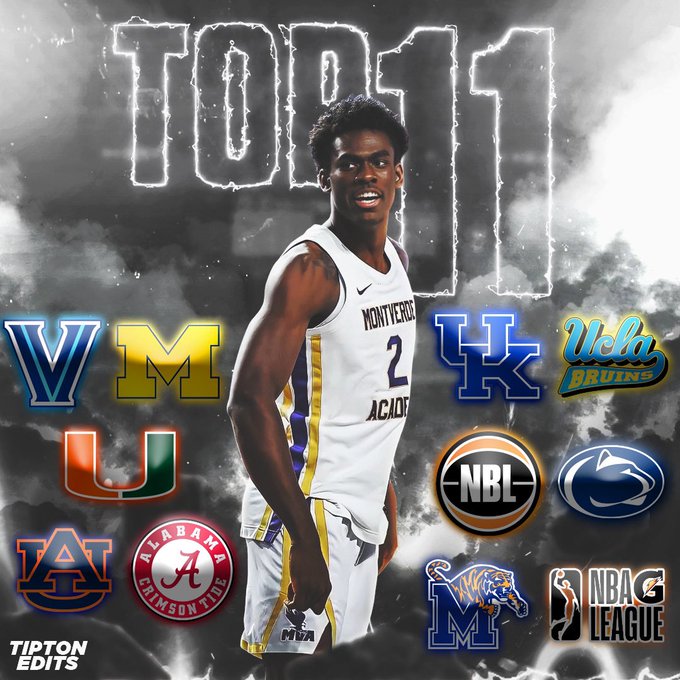 By ADAM ZAGORIA Jalen Duren, the No. 1 center in the Class of 2022 and a projected top-3 pick in the 2023 NBA Draft, is expected to reclassify and enroll in college for the 2021-22 season, sources said. Duren, the 6-foot-10, 230-pound big man from Montverde (FL) Academy, lists Villanova, Michigan, Miami, Auburn, Alabama, Kentucky, UCLA, Penn State and Memphis as his top nine schools. He is also considering the NBA G-League and Australian NBL. One source said the NBA G League Select team is offering him more than $1 million to play there next season alongside Jaden Hardy and Mike Foster. Five-star guard Scoot Henderson, 17, also recently agreed to a 2-year deal with Ignite. Miami recently hired DJ Irving, who coached at Duren’s former school, Philadelphia Roman Catholic, and also worked with Team Final, as an assistant coach. Former Miami standouts Ja’Quan Newton, Davon Reed and Lonnie Walker IV all played for Team Final. the favorite to win Peach Jam next month. The expectation is that Duren will play Peach Jam with his Team Final teammates, who include Emoni Bates, the No. 1 player in 2022 who recently decommitted from Michigan State, and then announce his future plans sometime after that event. After this story was first posted, Team Final issued a statement via Twitter: ESPN draft guru Jonathan Givony also Tweeted that Duren would be eligible for the 2022 NBA Draft — along with players like Chet Holmgren and Paolo Banchero — if he graduates high school by this October: “Because he’s born in November of 2003, graduating high school by October of 2021 would make Duren NBA draft eligible in 2022. Locking in and spending the months of August/September working on finishing up enough course work could be enticing for that reason.” “What scouts are telling me, he’d go one to seven in the [NBA] draft this year,” legendary grassroots sneaker guru Sonny Vaccaro told Mike Jensen of the Philadelphia Inquirer of Duren. “Jalen has a chance to be an NBA All-Star,” Team Final coach James Johns said in April, when Duren announced his top 11 options. “He just continues to get better. If this is about potential then Jalen Duren is the No. 1 player in this class. Nobody has been able to be more productive and still have such a high ceiling as him.” Duren recently was named Most Outstanding Player at the Pangos All-American Camp in Las Vegas, where he was watched by NBA and G League scouts. “He dominated the camp,” one source said. “Most guys felt like is who they thought he was.” Ranked by 247Sports.com as the No. 1 center and No. 2 overall prospect in the Class of 2022, Duren was part of a 2020-21 Montverde squad that claimed the program’s fifth national title in the past nine years with a win over Sunrise Christian (KS) Academy in the 2021 GEICO Nationals Championship Game. This post was updated at 6:52 a.m. on June 12. Follow Adam Zagoria on Twitter Follow ZAGSBLOGHoops on Instagram And Like ZAGS on Facebook