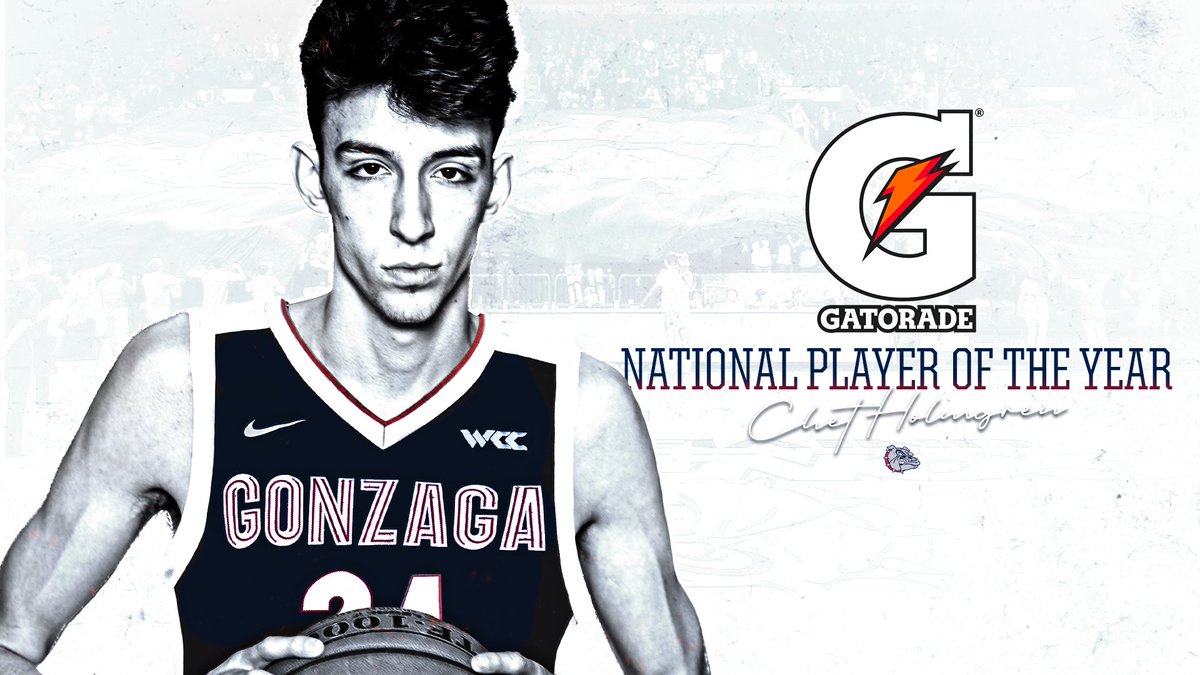 After previously being named the Naismith Boys High School Basketball Player of the Year, five-star Gonzaga commit Chet Holmgren added more hardware on Wednesday. The 7-foot center from Minnehaha Academy in Minneapolis was named the 2020-21 Gatorade National Boys Basketball Player of the Year. Jalen Suggs virtually surprised Holmgren with the news, while his family, coaches and teammates showed up with the trophy at school. The award, which recognizes not only outstanding athletic excellence, but also high standards of academic achievement and exemplary character demonstrated on and off the court, distinguishes Holmgren as the nation’s best high school boys basketball player. A national advisory panel comprised of sport-specific experts and sports journalists helped select Holmgren from nearly half a million high school basketball players nationwide. Holmgren beat out Auburn signee Jabari Smith and uncommitted 2022 center Donovan Clingan for the award. “Chet Holmgren was the greatest mismatch in the high school game this past season because of his outside shooting, inside game and physical measurables,” says ESPN National Recruiting Director Paul Biancardi. “At 7-foot-1 and owning an enormous wingspan, he’s a world-class shot blocker. He displays uncommon versatility with his scoring ability, ball-handling, court mobility and footwork. He’s a tremendous teammate and a young man who is humble and respectful, while still playing with an edge. His time at Gonzaga should put him in contention to be the No. 1 pick in the 2022 NBA Draft.” Holmgren led the Redhawks to a 20-1 record and the Class AAA state championship this past season. Holmgren averaged 20.8 points, 12.6 rebounds, 4.7 blocks and 4.4 assists while connecting on 68.2 percent of his field-goal attempts. A McDonald’s All-American Game selection, Holmgren is the 2021 Naismith High School Trophy Player of the Year and the nation’s consensus No. 1 recruit in the Class of 2021. He concluded his prep basketball career with 1,567 points, 964 rebounds and 456 blocked shots.         A member of his school’s Leadership Institute, a three-year discipleship and leadership-training program, Holmgren has donated his time to week-long tutoring and classroom-assistant duties at local elementary schools as part of Minnehaha Academy’s Cultural Field Experience. He has also volunteered on behalf of the Frog Town Boys and Girls Club and as a youth basketball instructor in addition to participating in goodwill/mentorship visits to lower school classrooms at his school. Holmgren has maintained a 3.46 GPA in the classroom. He has signed a national letter of intent to play basketball on scholarship at Gonzaga University this fall. “We are recognizing Chet as the best high school boys basketball player in the nation because of his dedication to performing on the court, in the classroom and in the community,” said Gatorade Senior Vice President and General Manager Brett O’Brien. “We take pride in looking at the whole athlete, not just the stats, and Chet is a role model for all of us.” Each year a selection committee evaluates the nation’s top talent in the District of Columbia and all 50 states, choosing national winners in 12 different sports: football, girls volleyball, boys and girls cross country, boys and girls basketball, baseball, softball, boys and girls soccer, and boys and girls track and field. Gatorade is dedicated to recognizing, supporting and keeping athletes in the game because of the lifelong skills sports instill on and off the field. Since the program’s inception in 1985, Gatorade Player of the Year award recipients have won hundreds of professional and college championships, and many have also turned into pillars in their communities, becoming coaches, business owners and educators. Previous winners include a distinguished list of athletes, such as Peyton Manning, Abby Wambach, Jayson Tatum, Derek Jeter, Elena Delle Donne and many other sports icons.