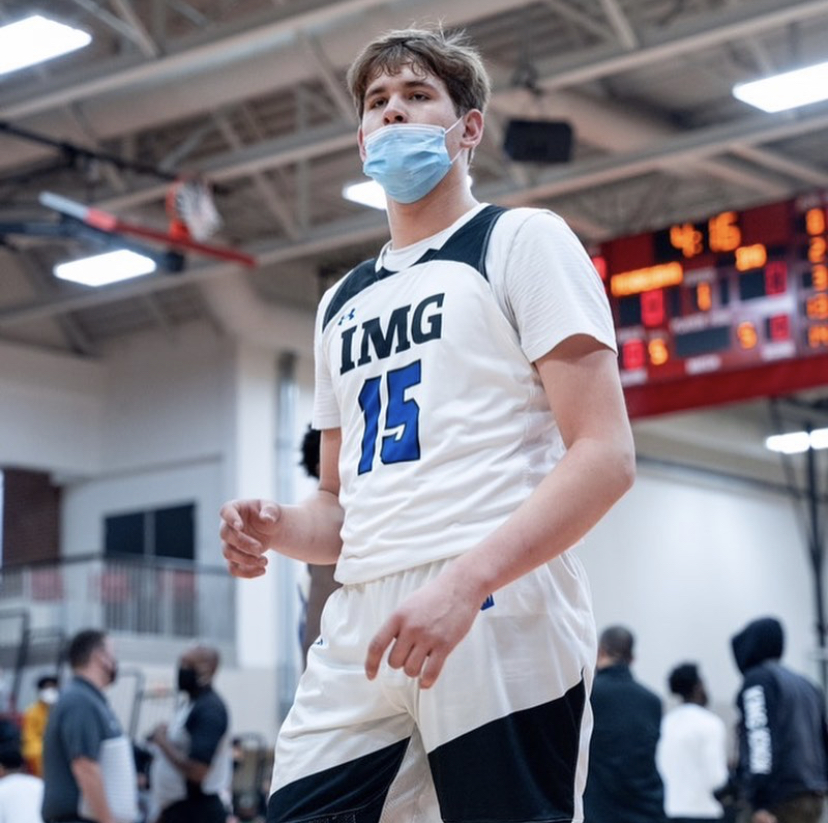 By TOBIAS BASS It’s been over a week since college coaches started contacting the class of 2023 and like many other prospects around the country, Gus Yalden has received several calls from Power Five programs. The 6-foot-9, 240 pound big-man out of Appleton (WI), is trying to get back into shape from a foot injury a few months back. “I’m just really trying to build back up after four months of recovery,” Yalden said. “Get my feel and touch down and get back my strength and conditioning “ After transferring from The Asheville (NC) School to IMG (FL) Academy last summer, Yalden fell by 44 spots in the latest player rankings by Rivals.com to No. 65 nationally. “I’ve been out with an injury and made the decision to play at a school that would benefit me long term, so my stats from this year weren’t overly impressive,” Yalden said. “Honestly, I feel like everyone of those dudes ahead of me knows I’m out here and are probably wondering when I’m going to get mine. “It’s a marathon not a sprint,” he said. “And regardless of ranking number, it isn’t going to change how hard I work or what my goals are.” Looking at his recruitment, Yalden says there are seven main schools involved: Iowa, Marquette, Wisconsin, Louisville, Nebraska, Gonzaga, and Virginia. “Honesty is huge, aligning on path to achieve my goals, plan to develop me on and off the court, academic support team and a healthy inclusive culture.”  He broke down each school for ZAGSBLOG: Nebraska. “The staff is top notch and the sports science center was impressive. They showed me Georges Niang clips so similar to how he was utilized inside and out at Iowa State.”  Iowa. “Really impressive Field House with updates facilities even though the building isn’t new. I met with the team. In film review we looked at pick and roll and pick and pop reads with a few different players.”  Marquette. “Some big staff changes and upgrades to facilities in the plans…only school that showed me film with two bigs on the floor which was intriguing for mismatches and a chance for me to use my whole arsenal offensively.”  Wisconsin. “New addition to weight room and locker room in the works. The staff are former players invested in culture of program and shared how I would be more of a Frank Kaminsky than Ethan Happ kind of big with more pick-and-roll, considering the guards they have and my ability to pick-and-roll or pick-and-pop.” Louisville. “I’m looking forward to learning all those details on my visit. The Zoom calls were a start but being on campus and meeting the coaches, players and staff can’t be replaced.” He said it’s too soon to tell about Gonzaga and Virginia. Yalden has been a social media sensation, drawing comparisons to 2020-21 NBA MVP Nikola Jokic and earning the nickname “Baby Jokic”. “It’s not that far off with parts of game, but I have a long way to go and lots of work ahead of me if I ever hope to catch up to where he is now,” Yalden said. “I can’t imagine how much work I have ahead of me to reach where he will likely finish.” As the game of basketball changes every three to five years, so does the player personnel. In order to combat these changes, Yalden is constantly adapting his game. “Having a counter to whatever was going to be thrown at me forced me to adapt.” As the live period starts to ratchet up, Yalden has big plans for the summer.  “I plan on proving all the doubters and haters wrong about what my value and upside are as both a player and teammate. “I also plan on visiting schools with significant interest and start building those relationships, lose the recovery weight and build some more muscle, eventually start working on speed and agility and play as much golf as I can and maybe catch some more fish.”  Follow Tobias Bass on Twitter Follow Adam Zagoria on Twitter Follow ZAGSBLOGHoops on Instagram And Like ZAGS on Facebook