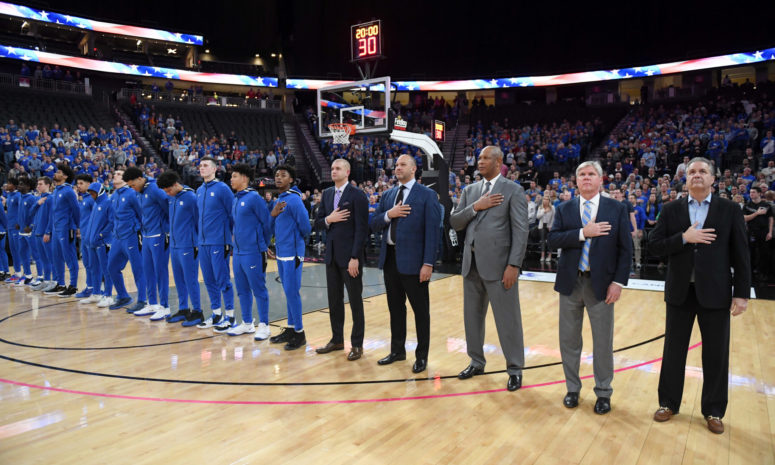 By ADAM ZAGORIA The Kentucky men’s basketball staff is undergoing several key changes with several coaches on their way out and an old face expected to return. Tony Barbee, the associate head coach under John Calipari, will become the new head coach at Central Michigan. Prior to these last seven seasons at Kentucky, Barbee was formerly the head coach at Auburn and UTEP where he went a combined 131-127.. The news was first reported by Kyle Tucker of The Athletic. “The last seven seasons at Kentucky have been incredible,” Barbee said. “To have the opportunity to coach at a historic and tradition-rich school like Kentucky has been a dream come true, and I want to thank Coach Cal and Mitch Barnhart for placing their faith in me to be a part of this storied program. From the moment I first put on that jersey as a player at UMass through my time at Memphis and most recently at Kentucky as an assistant, Coach Cal has been a mentor to me. I have learned so much from him, and the players-first approach that we have instilled at every place we have been together will carry on with me at Central Michigan. I want to thank Mitch Barnhart for giving me the opportunity to work and grow as a coach. I will always cherish the incredible friends and memories we built over the last seven sessions. I enjoyed every second of it. Thank you to the Big Blue Nation for all of your love and support.” Barbee was an important player in the turnaround at UMass in the early 1990s and served as an assistant in all three of Calipari’s college head coaching stops at UMass, Memphis and UK. “Tony is one of the best coaches I have ever coached with or against,” Calipari said. “He has an unbelievable basketball mind. The game plans that he put together for us, especially on defense, were second to none. I have known him since he was 15 and I know how much this game means to him. He is my brother and always will be. I expect big things to happen for Central Michigan and their players under Tony’s leadership. He is ready for this and I look forward to watching his success.” Assistant coach Joel Justus is moving on to serve as an assistant under Bobby Hurley at Arizona State, sources confirmed. The news was first reported by ESPN.com. Justus fills the spot vacated by Rashon Burno, who left to become the head coach at Northern Illinois. ESPN credited Justus with recruiting Bam Adebayo, Shai Gilgeous-Alexander, Immanuel Quickley, Keldon Johnson, Johnny Juzang, Brandon Boston and 2022 five-star guard Skyy Clark. Meantime, longtime former Kentucky and current Illinois assistant Orlando Antigua is the subject of a bidding war between Illinois and Kentucky. Illinois has made a significant 4-year offer, and Kentucky now must counter-offer, sources said. Former associate head coach Kenny Payne left Calipari’s staff prior to the season to serve as an assistant with the Knicks. He was a candidate for the DePaul job, which ultimately went to Oregon associate head coach Tony Stubblefield. This post has been updated. Follow Adam Zagoria on Twitter Follow ZAGSBLOGHoops on Instagram And Like ZAGS on Facebook