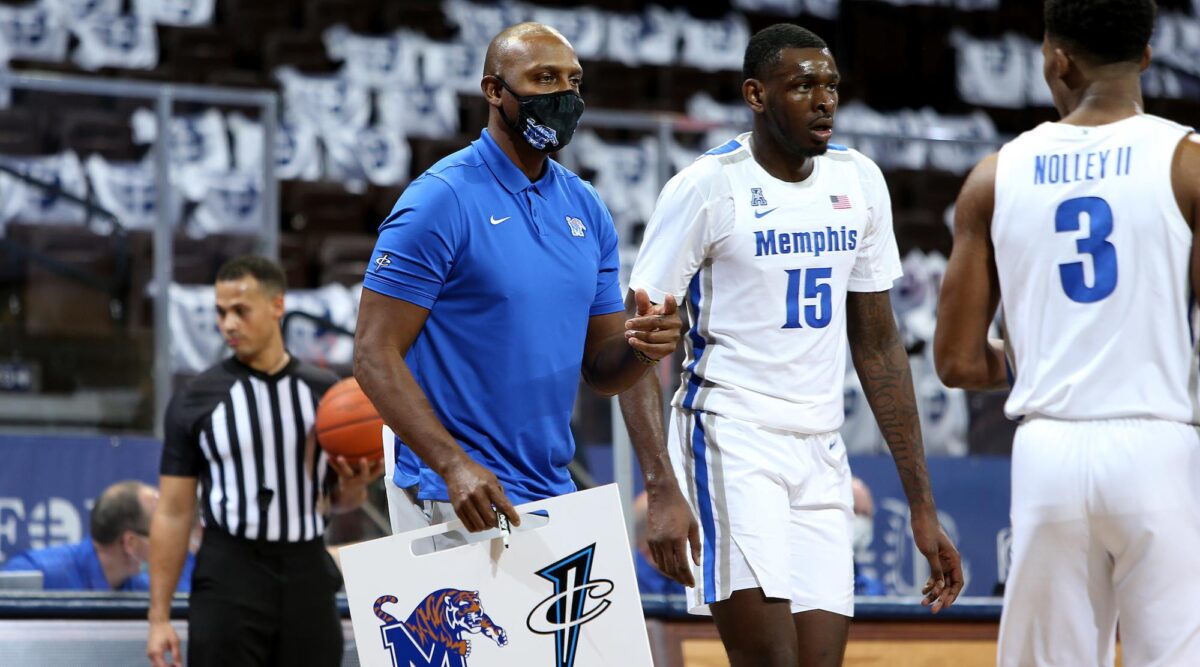 Memphis announced the addition of five players for the upcoming 2021-22 season. Joining the roster under coach Penny Hardaway are Earl Timberlake (G, 6-6, University of Miami), Davion Warren (G, 6-6, Hampton University), John Camden (F, 6-8, Wolfeboro, N.H.), Josh Minott (G, 6-9, Boca Raton, Fla.) and Sam Onu (C, 6-11, Malvern, Pa.). With the NCAA Division I Council approving a one-time transfer waiver, Timberlake and Warren will be eligible to play immediately next season. “Overall, we are really glad to have this class,” Hardaway said. “We got a mixture of young guys and veterans, and that is never bad. The young guys are coming in 6-8 and above, which is amazing for skilled guys to be coming in 6-8, 6-9, and Sam is close to 7-feet. And then we added 6-6 and 6-6 with Earl and Davion, so we definitely got bigger and longer.” Earl Timberlake Timberlake played in seven games in his freshman season at Miami, battling injuries along the way, and averaged 9.3 points, 5.0 rebounds and 2.5 assists per contest. He scored in double figures in five of his seven games, and he also grabbed eight rebounds in two of those contests. Coming out of DeMatha Catholic (Md.), Timberlake was a consensus four-star, top-40 recruit. He averaged 16.5 points, 10.0 rebounds and 4.0 assists per game as a senior, helping DeMatha to a 30-3 record, and he was a McDonald’s All-American Game nominee. “Earl is a two-way player,” Hardaway said. “He’s a matchup problem at the ‘three’ and the ‘four’ along with the ‘two,’ because if he has a smaller guy on him he’s going to go to the post, and with a bigger guy he’s going to go around him. And he can defend one-through-four easily, so he’s probably the best two-way player that we’ll have.” Davion Warren Warren played his junior and senior seasons at Hampton, where he led the Big South in scoring and ranked 13th in the nation in 2020-21 at 21.2 points per game. He shot 45.5 percent from the field, 75.5 percent from the free throw line and 30.2 percent from 3-point range, and he also contributed 6.3 rebounds, 3.0 assists and 2.1 steals per game last year. Warren had 32 points and 15 rebounds against UNC Asheville on Jan. 9, and he followed that up with a 34-point outing five days later at USC Upstate. Before joining Hampton, the Buffalo, N.Y., native played two seasons at Olney Central (Ill.) College. He prepped at Bishop Timon-St. Jude (N.Y.) High School. “Davion is just an all-around stat guy,” Hardaway explained. “He can get by his man, make others better, make a 3, and he can play on all levels – fast break, finish at the rim, free throws, 3s – he’s a great all-around player. He’s a veteran coming in as a senior and bringing us senior leadership, and he’s hungry. We’re very happy to have him.” John Camden Camden, rated a four-star recruit and the 90th-ranked player in the nation by Rivals, played his senior season of 2020-21 at Brewster Academy in Wolfeboro, N.H. He averaged 15.8 points per game as a junior at Archbishop Carroll (Pa.) in 2019-20. Camden chose Memphis over offers from Florida, Miami (Fla.), Syracuse and Virginia Tech, among others. “John is, to me, Tyler Herro of the NBA,” Hardaway said. “He has the same game. He moves without the ball well, and he shoots it exceptionally well. He can put it on the floor and finish at the rim. He has a really nice game.” Josh Minott Minott, tabbed by 247Sports as a four-star recruit and the 29th-best prospect in the nation, played at St. Andrew’s School in Boca Raton, Fla. He averaged 23.1 points and 8.3 rebounds per game as a senior in 2020-21 after helping lead St. Andrew’s to its first state basketball championship as a junior. Minott was named the Palm Beach 5A-1A Player of the Year after his senior season by the South Florida Sun Sentinel. He signed with Memphis over offers from Baylor, Florida State, Oklahoma and Texas, among others. He was named a Sports Illustrated All-American candidate. “Josh is more of a point-forward,” Hardaway explained. “He can play the one-through-four, and he is very versatile. He’s a playmaker and he has incredible athleticism, and the sky is the limit for him.” Sam Onu Onu played at The Phelps School in Malvern, Pa., and he was listed as a four-star recruit and the 97th-ranked prospect in the nation by Rivals. He averaged 15 points, 12 rebounds and three blocks per game as a junior in 2019-20, and he made consistent improvement each year in his four in the United States. Onu picked the Tigers over offers from Illinois and Kansas, among others. Originally from Nigeria, he is fluent in three language (English, Igbo and Yoruba). “Sam is a true big,” Hardaway said. “He is a guy who can stretch out to a ‘three,’ but he likes to do all of his dirty work down in the post. He has great footwork, and he is a strong, nice-sized big that we need to play that physical game down low.” The Tigers won the 2021 NIT championship and finished the 2020-21 season with a 20-8 record. The 20-win season was Memphis’ fourth in a row, including all three seasons under Hardaway. The Tigers are one of just 14 schools with four-straight 20-win seasons to their credit. Hardaway has won 63 games in three seasons as Tigers head coach, which is the third-most among 50 head coaches hired before the 2018-19 season. (Release via Memphis) Follow Adam Zagoria on Twitter Follow ZAGSBLOGHoops on Instagram And Like ZAGS on Facebook