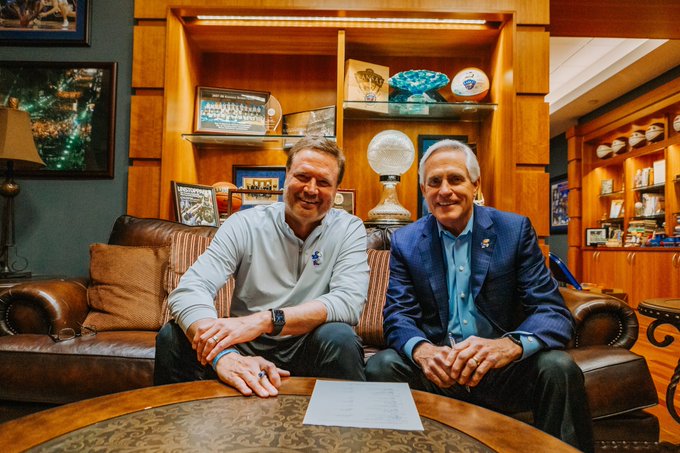 By JACOB POLACHECK The University of Kansas has signed head coach Bill Self to a lifetime contract, the program announced Friday. “I want to extend my sincere appreciation to Chancellor [Douglas] Girod, Kurt Watson, and the rest of the leadership at KU for their belief and faith in me to provide this lifetime contract,” Self said in a press release. “Every day, I am reminded just how fortunate I am to lead this storied program and there truly is no place else I would rather be.” Self’s current contract, which was set to expire in March of 2022, is being replaced with a new five-year rolling agreement that automatically adds one year at the conclusion of each season for the remainder of his career. “As we continue to work through the challenges facing our program, we look forward to moving ahead and focusing on our bright future,” Self said. I would also like to express my gratitude to our alumni and donors, as well as the best fans and students in the nation, that have supported my family and me for the past 18 seasons. I’m excited to remain your basketball coach and compete for many championships in the future.” Self, who was inducted into the Naismith Basketball Hall of Fame in 2017, has a career record of 729-223. He is Kansas’ all-time winningest coach on percentage (.816) and has recorded a 522-118 record since taking over as Kansas head coach in 2003. Self has led Kansas to three final fours (2008, 2012 and 2018), including a National Title in 2008. He also led Kansas to a record 15 consecutive Big 12 titles. “For almost 20 years, Coach Self has embodied the spirit and tradition of the University of Kansas, leading our men’s basketball program to a national championship, 15 Big 12 titles and 17 NCAA Tournament appearances,” University of Kansas Chancellor Douglas Girod said. “We believe in Coach Self and we believe in the future of our program under his leadership, and we are thrilled that he will continue to be a Jayhawk for the rest of his coaching career.” The new deal was agreed upon as KU looks to fill its Director of Athletics position after Jeff Long stepped down from his position in March. “Bill Self has meant a tremendous amount to the University of Kansas and our entire Lawrence community throughout his 18 seasons. He has changed the lives of so many young men that have played for him throughout his nearly 30 years as a head coach,” Interim Director of Athletics Kurt Watson said. “I have known Bill for many years, but working closely with him over the past few weeks in my current role has shown me even more so on a daily basis how deeply he cares about this program. We are certainly proud that he began his coaching career as a graduate assistant at KU in 1985 and that this new contract will ensure he finishes his coaching career here as well.” Self’s new contract includes a $2 million buyout if he wanted to leave KU for an NBA head coaching job. The contract also protects Self against being fired for the current alleged NCAA infractions. “The parties agree that Athletics will not terminate Head Coach for cause due to any current infractions matter that involves conduct that occurred on or prior to the date of full execution of this Agreement,” the contract states. Follow Jacob Polacheck on Twitter Follow Adam Zagoria on Twitter Follow ZAGSBLOGHoops on Instagram And Like ZAGS on Facebook