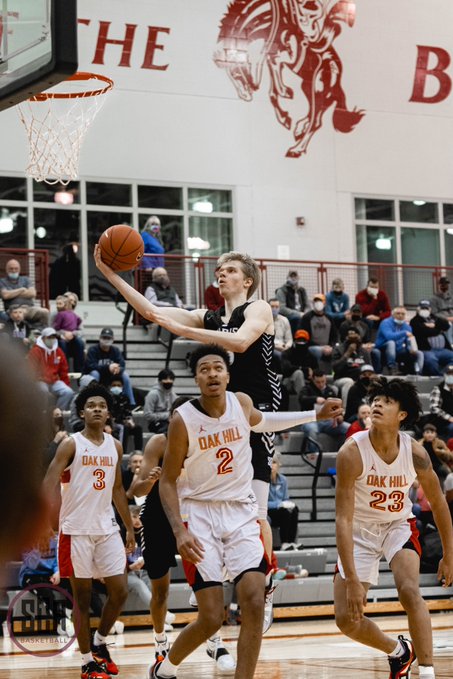 By JACOB POLACHECK Class of 2022 forward Gradey Dick has committed to Kansas, he announced Wednesday. The 6-foot-7, 195-pound small forward from Sunrise Christian (KS) Academy, chose KU over Alabama, Baylor, Oklahoma State, Illinois, Florida, Texas Tech and Purdue. “Just being from here and knowing my way around campus was an advantage,” Dick told ZAGSBLOG Wednesday evening. “I just tried to be mature in where I wanted to go, but in the end I felt Kansas was still home.” Dick joins four-star guard Kyle Cuffe Jr. as the second commit in Kansas’ 2022 recruiting class. “I haven’t really talked to [Kyle] yet, but I’ve seen how he plays,” Dick said. “I think we can bring some energy.” According to 247Sports.com, Dick is ranked as the No. 8 small forward and No. 43 overall prospect in the Class of 2022. “I’m a versatile wing that can score it in many ways and still guard multiple positions due to my size,” he said. Dick’s high school teammate, Class of 2021 forward Zachary Clemence, committed to Kansas last May. “Gradey has grown so much defensively and with his energy,” Sunrise Christian head coach Luke Barnwell said. “He is affecting possessions on both ends of the floor for us. He is so talented that he will score double figures without us noticing. “He has great stroke and shoots the ball from deep,” he added. “Gradey has a high ceiling due to his size, his ability to score and his athleticism. His future is very bright!” This story has been updated. Photo: Kobi Russom Follow Jacob Polacheck on Twitter Follow Adam Zagoria on Twitter Follow ZAGSBLOGHoops on Instagram And Like ZAGS on Facebook