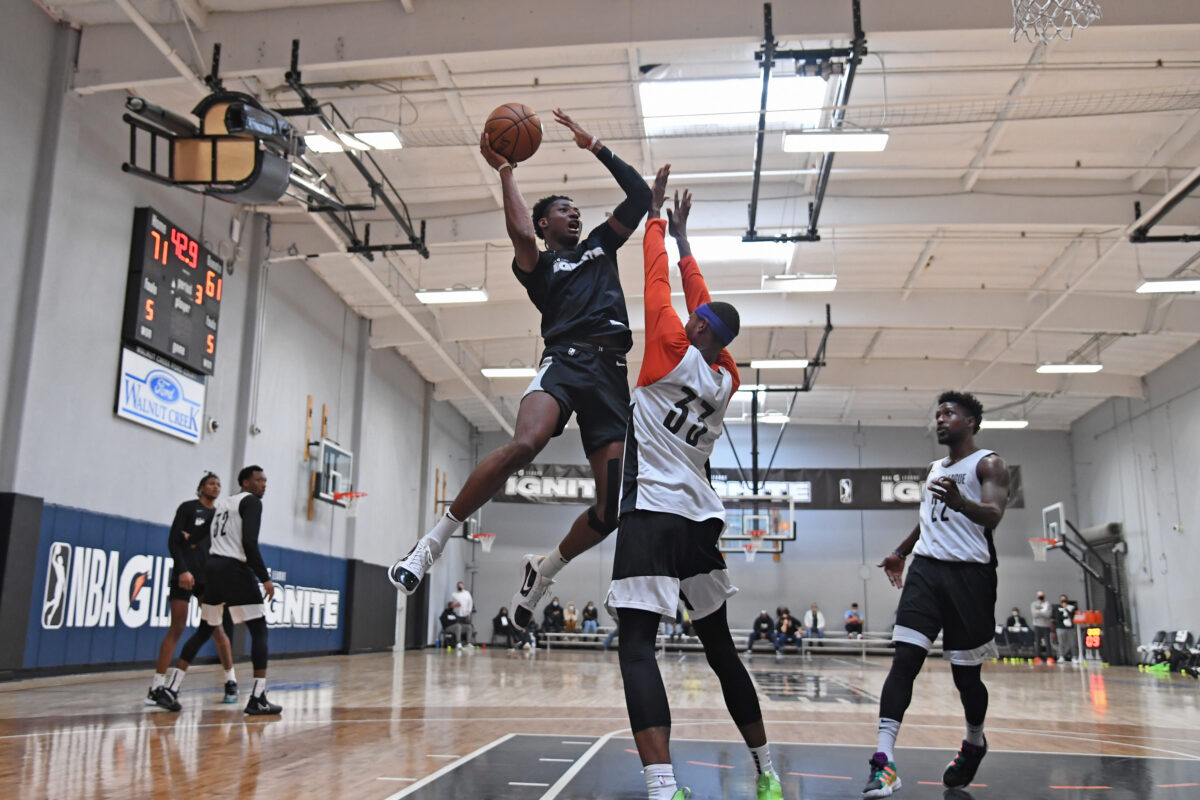 By ADAM ZAGORIA During one play in his debut with the G League Ignite on Wednesday, Jonathan Kuminga dribbled down the lane and glanced to his right as if he was about make a pass, but instead threw down a two-handed dunk. On another, he deftly threaded a 30-foot bounce pass in transition to teammate Jalen Green that also led to a dunk. The 6-foot-8 Kuminga, who has drawn comparisons to Boston’s Jaylen Green and the Clippers’ Paul George, finished with 19 points, four assists and two blocks in his professional debut, a 109-104 victory over Jeremy Lin and the Santa Cruz Warriors at Walt Disney World near Orlando. He had a key block at the rim in the final seconds of the game. “He’s the real deal,” one NBA executive texted from the bubble, referring to Kuminga. Said Ignite coach Brian Shaw: “I wasn’t impressed because I see it every day in practice and I’ve been with him since Aug. 28. It’s what I expect, it’s what I see every day. “He does a lot of things for us, he’s a very talented player and you guys are just seeing the beginning of what he can do.” Veteran guard Jarrett Jack had 23 points on 9-of-10 shooting for Ignite, including 3-of-3 from deep. Jordan Poole had 22 points for the Warriors, Lin had 18 and Nico Mannion 17. A native of the Democratic Republic of Congo, Kuminga played on the Nike EYBL circuit with the NY Rens and spent last year at The Patrick School (N.J.) In July, after reclassifying to the Class of 2020, he announced he would forego his college options — Kentucky, Duke, Auburn and Texas Tech — in order to play professionally in the new G League path. Kuminga, who turns 19 in October, is now the projected No. 5 pick in this year’s Draft, per ESPN.com, behind Oklahoma State’s, Cade Cunningham, USC’s Evan Mobley, Green and Gonzaga’s Jalen Suggs. A number of NBA teams, including the Knicks, have already begun reaching out to Kuminga’s high school and AAU coaches for information on his background and character. After entering the Ignite bubble in Walnut Creek, Calif., in August, Kuminga and his teammates had to wait until February to play real games due to the pandemic. They played a couple of scrimmages against G League veterans in December, when Kuminga averaged 23.5 points. The Ignite will be heavily showcased during the bubble and will next play Friday against Oklahoma City (3 p.m., ESPNU) and then Saturday versus Raptors 905 (7 p.m., ESPN+). IOWA WOLVES FINED The NBA G League’s Iowa Wolves have been fined $10,000 due to violations of the league’s Health and Safety Protocols.  Wolves players Charlie Brown, Ashton Hagans, Jaylen Johnson, Ade Murkey and Dakarai Tucker will miss the team’s next two games, and associated pay, as they quarantine following violations of those protocols.  Follow Adam Zagoria on Twitter Follow ZAGSBLOGHoops on Instagram And Like ZAGS on Facebook