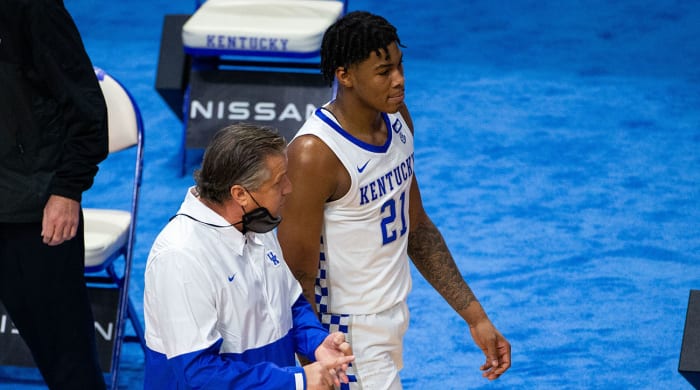 By ADAM ZAGORIA With Kentucky off to its worst start since the 1926-27 season, head coach John Calipari has asked freshman Cam’Ron Fletcher to “step away from the team.” Fletcher is averaging 2.2 points and 2.2 rebounds in 8.7 minutes through six games. The 6-foot-6 forward from St. Louis chose Kentucky over Michigan State, Missouri, North Carolina, and Alabama in August 2019. Fletcher was seen in tears on the Kentucky bench in the final minutes of their 75-63 loss to North Carolina on Saturday. At this point, it’s unclear when or if Fletcher will return to the team.

We have asked Cam Fletcher to take some time and step away from the team. He needs to reflect and do some soul searching to get his priorities in order. Any attitude or actions that are detrimental to this team will not be tolerated – and that goes for everyone on the team.

We have a culture here that’s been built over the last 11 years AND IT WILL NOT CHANGE. Through good times and bad, this culture is meant to change individuals and change maturity levels. This hurts our team, but this is about Cam and his future.

I talked to Cam and his mother and they know I care about him and I love him, but they also understand that there are changes that need to be made. It’s his job to decide whether he can perform within this culture both on and off the court.