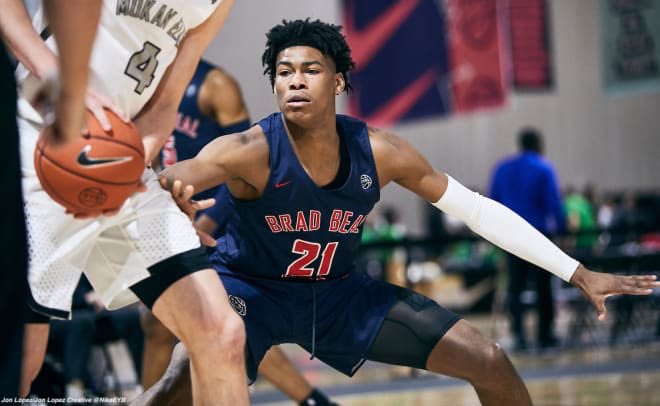 By ADAM ZAGORIA Cam’Ron Fletcher, the 6-foot-6 forward from Vashon (MO) and Brad Beal Elite, committed to Kentucky on Sunday. He also considered Michigan State, Missouri, North Carolina, and Alabama. Fletcher has taken visits to Missouri, Michigan State, and Kentucky. “The things I like about Kentucky is their style of play,” Fletcher told 247Sports.com during his official visit last week. “I feel like the coaching staff is great and Coach Cal is a great coach. He cares about all of his players and he makes things happen for them.”

This year on the Nike EYBL Circuit, Fletcher averaged 12.3 points and 6.4 rebounds in 14 games played. According to 247Sports, Fletcher is ranked No. 36 nationally and is the No. 8 small forward. “Obviously, they really love his upside,” Vashon coach Tony Irons told 247. “They feel like he has a chance to be really good and their style of play they think he can thrive in. He’s a kid who can do multiple things. He’s long and athletic and there are things he can get better at but defensively, they think he can be special in that area.” He is Kentucky’s second commit in 2020, following shooting guard B.J. Boston. Follow Ryan on Twitter Follow Adam Zagoria on Twitter And like ZAGS on Facebook