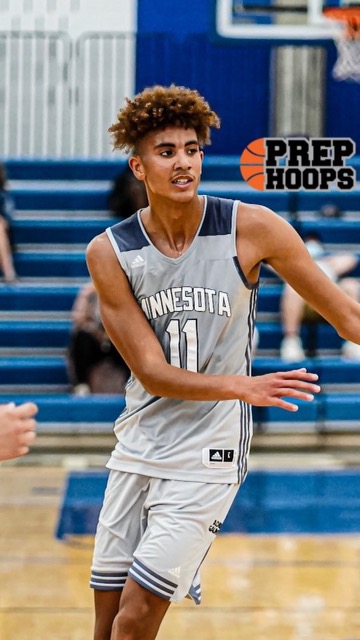 By JACOB POLACHECK Class of 2022 prospect Ahjany Lee is quickly seeing his recruitment expand as one of the top forwards in his class. The 6-foot-8, 195-pound power forward from Byron (MN) Senior High School, currently holds offers from Iowa, Minnesota, St. Thomas, Hampton and Florida. He broke down each school: Iowa: “Being my first, it was really big for me, considering they’re in the Big Ten. I talked to their assistant coach once. The next week, coach [Fran] McCaffery called. They have a history of offering people early. Their best player, Luka Garza, was offered early. For them to offer me early, instead of other people that are a grade above me in my same position, it really reassures me about the player I am. They could’ve offered anybody else in my grade at my position and height, but they chose me. It really helps me know that I’m the good player that I think I am.” Minnesota: “We had a Zoom call with them a few months before they offered. They usually like to watch their players in person before they offer, so I wasn’t expecting to get an offer until a little ways through the season. That caught me by surprise. They offered earlier than I expected. They made it clear that they are very interested, so it wasn’t really worth the wait.” St. Thomas: “When I first found out that they were making the jump from Division 3 to Division 1, that really interested me. I’ve always heard about St. Thomas growing up, with their amazing academics. Coming from Minnesota, that’s always been one of the bigger D-3 schools here. When I heard they were making the jump, I was talking to my high school coach and said ‘it would actually be really cool to be able to stay home, go to a smaller college than the U of M, get great academics and play D-1 basketball’. He asked me if I wanted him to reach out to them and I said yes. “That was sometime in the summer and since then I’ve been talking to them a lot. I’ve talked to almost their entire coaching staff. The night that they offered, it was really honorable for me to be the first one. They really believe that I could do good things for their program.” Hampton: “I’ve only talked to the head coach once. He’s a really cool guy. He’s got connections with people in Minnesota, so I’m assuming that’s how he heard about me. He’s a really cool guy and the fact that he called and offered right away makes me feel good about myself. It just makes me feel like I’m a better player than I thought I was. Even with these bigger offers, for them to still offer me, it feels good because I’m glad people know that even with bigger offers, I’m not going to rule them out.” Florida: “I’ve also only talked to them once. I talked to the assistant coach. One of the coaches in my AAU program set me up with him. He’s a really cool guy. Again, just to get an offer from a high-level college like that right away, it’s a blessing.” This month, Lee has conducted Zoom calls with Stanford, St. Thomas and San Diego State. He also had a Zoom call with Minnesota earlier this year. “The next step would be really getting out to see these colleges,” he said. “We won’t be able to do that until April, it looks like now. I can’t really see myself cutting my list until I go and see these places and how it feels. As far as a commitment, I’m pretty far from that. There’s a lot of if ands and buts about it.” When making his college decision, Lee says ‘the biggest thing is academics’. “The level of Division 1, between high-major and mid-major, doesn’t really matter to me,” he said. “They know that education is first. I need very good academics and I’m going to bring my best wherever I’m at.  “Basketball-wise, a lot of the schools that I talk to, I know about,” he said. “If I don’t, I’ll do some research. I’ll look at where it’s at. Location has never been a big issue for me, but I’ll still look at where the school is. Major is a big thing. I haven’t decided what I want to major in, but it’s important knowing what they have. Also, what kind of school they are and just research generally.” Ranked by 247Sports.com as the No. 24 power forward and No. 109 overall prospect in the Class of 2022, Lee says he ‘loves to play defense’. “A lot of people say I’m very active on the defensive end. It’s my favorite thing to do,” he said. “I love to play above the rim, block a lot of shots. I like to think I can guard all five positions.I work on my foot speed a lot. I think it’s better than a lot of people at my height. I’m willing to guard guards or guard people inside. “On the offensive end, this last summer, I worked a lot on my jump shot. That’s something that I’m really focused on now, just trying to be more consistent from the midrange, outside and shooting off the dribble. I’m trying to get more comfortable with shooting in general.” Lee averaged 7.6 points and 9.2 rebounds per game last season as a sophomore. This year, Lee hopes to expand his game outside the post. “After the summer, I’m looking to really have the ball in my hands more and create shots for myself and creating shots for my teammates,” he said. Follow Jacob Polacheck on Twitter Follow Adam Zagoria on Twitter Follow ZAGSBLOGHoops on Instagram And Like ZAGS on Facebook