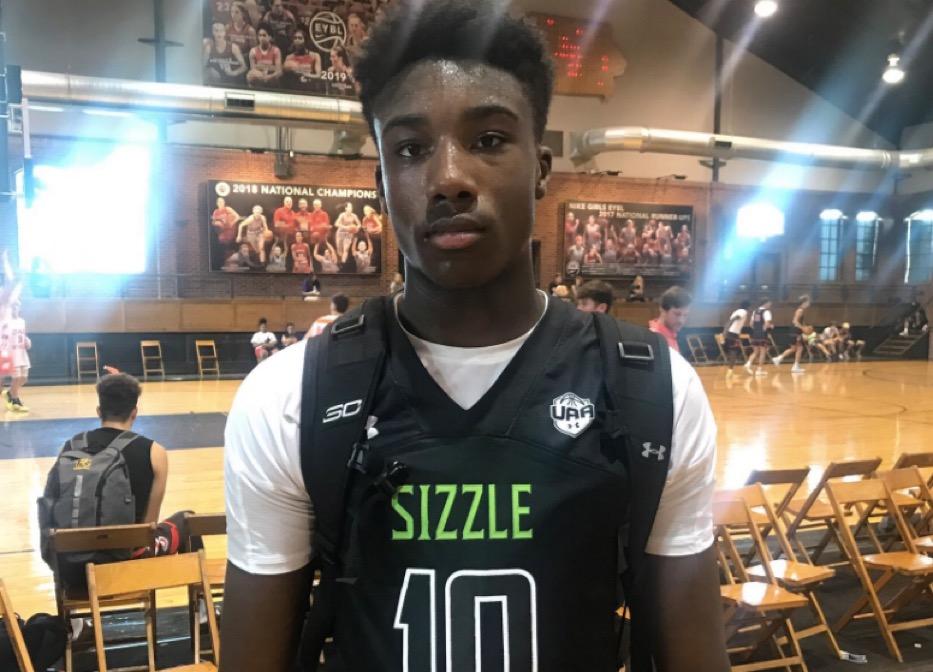 By JACOB POLACHECK Class of 2022 forward Demarion Watson-Saulsberry says that five schools are working the hardest for his recruitment. The 6-foot-6, 175-pound small forward from Totino-Grace (MN) High School, said in a phone interview Wednesday that Missouri, Xavier, Marquette, Iowa State and Minnesota are the five schools in contact the most. He broke down each school: Missouri: “They were my first offer so that was a big thing for me. They’re the team that stepped in and truly believed in me early on. They’re a really good school. They’re an SEC school. They haven’t been doing as well as they should be lately, but I feel like with their recruiting and coach [Cuonzo] Martin, they should be a really good school. They’ve really just been on me about how Missouri would be a good fit for me and how coach Martin could develop me as a player and a person.” Xavier: “Similar to what Missouri is saying, they’ve been telling me that I could fit very well with their play style. They shoot a lot of threes. They get out in transition a lot. If I went there, I could have a big role freshman year.” Marquette: “Mostly, they’ve been saying that they need a wing. That’s what position I am. They said I would fit well in their style. Similar to Xavier, they play with a fast pace in the open floor and shoot a lot of threes. I think I could play well under their system.” Iowa State: “Really, they’ve just been telling me, like the other schools, that I would fit well in their system. All these schools like to get out in transition and don’t use a lot of half-court plays. They just let their players play. They’ve gotten a lot of players to the NBA and they’ve pitched that I could be one of those players that go to the league.” Minnesota: “I had a Zoom call with them a couple weeks ago and they’ve been saying that I could be similar to Amir Coffey, where I could have the ball in my hands and bring up the ball, get in transition, run and be able to use my abilities to get to the basket.” Watson-Saulsberry’s most recent Zoom call was with Nebraska a little under two weeks ago. “I met with their whole coaching staff,” he said. “They have a really good coach in Fred Hoiberg, who was an NBA coach. He has a lot of connections, which would be great towards getting to the league.” He also had a Zoom call with Creighton three weeks ago. “Same thing with a lot of these Big East schools, they like to get out in transition at a fast pace and shoot a lot of threes,” he said. “At Creighton they shoot a very high three percentage and they also have a really good coach in coach [Greg] McDermott.” Watson-Saulsberry mentioned a number of factors when evaluating his college options. “Mostly, I’m thinking about what spot I feel like would be the best for me to play at the highest level,” he said. “Also, the relationship I have with the coach. Is he really going to have my best interest or am I going there to fill a spot because it looks good? Also, the fan base. If it’s a really good fan base, the fans are involved a lot,” he said. “And the players…If the players aren’t in a good environment then it’s ultimately a failure. Not having the right players can really hurt a team.” Watson-Saulsberry says he hopes to be able to take visits before he makes his college decision. “I don’t want to make a decision too early because I haven’t visited these schools,” he said. I really want to go, but at the same time, I can’t because of all the restrictions they have. I can’t really make a decision unless I visit the campus.” Ranked by 247Sports.com as the No. 32 small forward and No. 142 overall prospect in the Class of 2022, Watson-Saulsberry describes himself as a ‘two-way player’. “On offense, I can score on all three levels, whether it’s the three, the midrange or using my athleticism to get to the basket,” he said. “On defense, I can get in the passing lanes, get steals, blocks and defend on the perimeter. I can guard the one through five positions on defense.” With his junior season approaching, Watson-Saulsberry says he wants to improve his strength. “I want to try and get stronger, getting in the weight room more,” he said. “I’m also trying to improve my ball handling just in case we’re getting pressed or our primary guards can’t bring up the ball, then I can bring up the ball.” Follow Jacob Polacheck on Twitter Follow Adam Zagoria on Twitter Follow ZAGSBLOGHoops on Instagram And Like ZAGS on Facebook