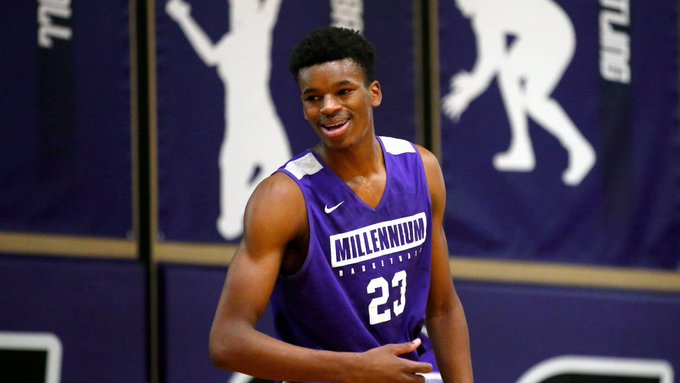 By JACOB POLACHECK Class of 2021 forward DaRon Holmes is closing in on a college decision, he told Jason Jordan of Sports Illustrated on Monday. “This is such a tough decision,” Holmes said. “It’s so much harder when you have all great options.” The 6-foot-8, 195-pound power forward from Montverde (FL) Academy, is currently considering Marquette, Arizona, Dayton and California. He broke down each school for the USA Today: Arizona: “I’m from there so I love it. It’s a great atmosphere with great coaching, a great system and I know that I would develop there.” Marquette: “I really like them; that’s the only school I’ve taken an official visit to on my final list. They have a great culture there and they really take care of their players. The staff and the players have a great connection and the students really support the team. That part is really underrated there. That’s a special place.” California: “I love Cal because it’s great academically and with basketball. I’m close with Coach (Mark) Fox and the whole staff. I really believe that I would develop there too. I feel like they’re a school on the rise and like the thought of being a part of something like that.” Dayton: “They’re really underrated, and they do a great job of developing their bigs. The staff knows what they’re doing, and they’ve had a lot of growth with the program. That’s big.”  Ranked by 247Sports.com as the No. 13 power forward and No. 49 overall prospect in the Class of 2021, Holmes talked about having to learn at the next level. “That’s the part a lot of guys miss,” Holmes said. “Coaches can have a plan for you, but it’s based on you working and buying into their system. My only goal is to do whatever I can to help us win. It’s not easy going up a level, all you can do is work hard.” Follow Jacob Polacheck on Twitter Follow Adam Zagoria on Twitter Follow ZAGSBLOGHoops on Instagram And Like ZAGS on Facebook