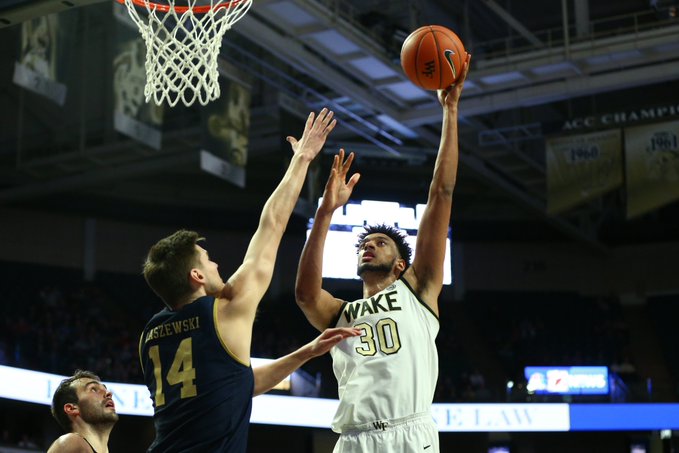 By ADAM ZAGORIA An SEC transfer rule could hold up Olivier Sarr’s eligibility at Kentucky, an NCAA source said. The SEC has a policy that requires undergraduate transfers to have two seasons of competition remaining: “A student-athlete who, upon enrollment at the certifying institution, has less than 2 years of eligibility remaining shall not be eligible for intercollegiate competition at a member institution until the student has fulfilled a residence requirement of one full academic year.” An SEC spokesman said Monday Sarr would need a waiver from the conference to become eligible, but declined to comment on what waivers are or are not “in house.”

Per an SEC spokesman, an exception to this rule would require a waiver from the Conference pic.twitter.com/ngA59yNZgg

The 7-foot Frenchman completed three years of play at Wake Forest before transferring in May. Sarr averaged 13.7 points, 9.0 rebounds and 1.2 blocks per game as a junior last season, notching 11 double-doubles. He was arguably the top transfer on the market this spring. The 7-foot Sarr is not a grad transfer like Kerry Blackshear, who played one year at Florida last season after graduating from Virginia Tech. Kentucky spokesman did not immediately respond to a request for clarification. Kentucky coach John Calipari said in July he was “confident” Sarr would be granted an NCAA waiver to play this season. “Olivier’s stuff has been in, where we’re waiting to hear,” he said then. “We feel confident, but you never know until you hear it’s good to go. He’s got a great case. But, you know, we’ll wait to hear.” As part of his waiver request, Sarr likely argued that Wake Forest told him Danny Manning would return (before he was fired), effectively delaying his ability to enter the NBA Draft before the deadline. He then transferred to Kentucky in May. “There’s no way I sit out,” Sarr told ESPN. when he transferred, adding he could have also played professionally instead. Calipari said he couldn’t elaborate on Sarr’s argument for a waiver. “Well, I can’t,” he said. “I can’t. The bucket thing is what they talk about publicly, the NCAA. It fits in these buckets. I believe so. But where his fits in, you know, I’m not at liberty to say.” Calipari added: “What they’ll do is they’ll red flag it because it’s Kentucky. It’s Olivier Sarr who’s one of the best transfer players and they’ll want to make sure, let’s really make sure we have this right. And they may take more time, but I don’t think it’s like they’re treated any different. No, I know they don’t treat it any different than any other case, but it is more of a high-profile case, so they’ll look at it.” This post has been updated. Follow Adam Zagoria on Twitter Follow ZAGSBLOGHoops on Instagram And Like ZAGS on Facebook