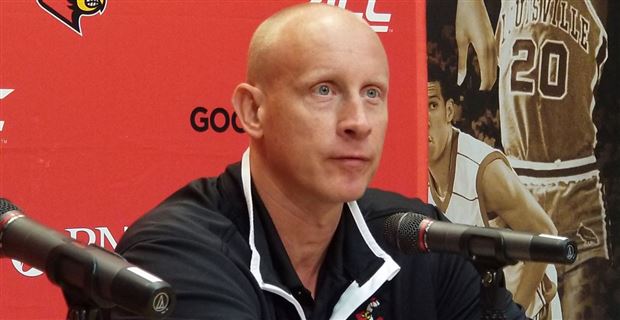 By ADAM ZAGORIA Chris Mack says he isn’t certain if Louisville will plays rivals Kentucky and Cincinnati in the non-conference this year due to the imbalance created by not having fans in arenas. Louisville was due to host Kentucky in December, but without fans in attendance Mack said it wouldn’t be fair to play the game and then have to compete at Rupp Arena in front of fans in 2021. Asked by John Fanta if the game will happen this year, Mack said, “I don’t know.” “Where is the equity of Kentucky coming here in front of no fans and then having to go back to Rupp Arena in front of 21,000 fans?” Mack asked. “But I recognize and we recognize the best rivalry in all of college basketball. If there was somehow we could do this at a neutral site, again that’s without talking to Kentucky and what their scheduling holds.”

NEW: I asked Louisville head coach Chris Mack if the Cardinals will face Kentucky this season. His response: pic.twitter.com/p54nrkSCFE

Kentucky and Louisville have met 53 times and Kentucky leads 37-16, including two NCAA Tournament games. Kentucky won last year’s game 78-70 at Rupp. As for the Cincinnati game, Mack had similar sentiments. “We were supposed to play our second game of the season against those guys at their place,” Mack said. “Talking to John Brannen, how fair is it for us to play their home game in front of literally no fans and then have him return the game?” Louisville, meantime, is looking to host a non-conference bubble Nov. 25-Dec. 5. Kentucky’s schedule is fluid. They are supposed to play in the Champions Classic featuring Kentucky, Kansas, Michigan State and Duke sometime between Dec. 1-5 in Orlando. The Wildcats will face Georgia Tech Dec. 6 in Atlanta in an ESPN game, a source said. That game was originally slated for Nov. 27. And they are looking to host an MTE potentially featuring Richmond, Detroit-Mercy and Hartford Nov. 27.

They are looking to host a bubble from 12/10-17 pic.twitter.com/lUATYtMgHi