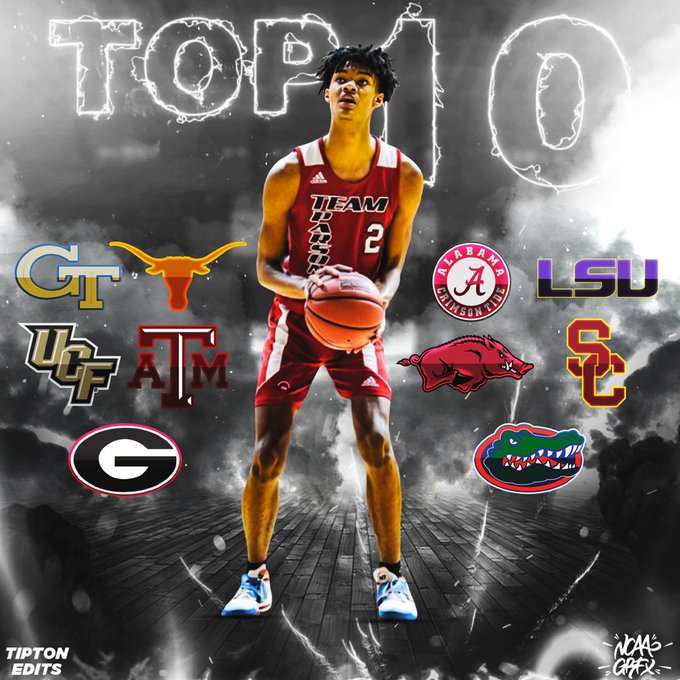 By JACOB POLACHECK Class of 2021 forward Alex Fudge has cut his list to ten, he tells ZAGSBLOG. The 6-foot-8, 175-pound small forward from Robert E. Lee (FL) Senior High School, has named LSU, Florida, Georgia, Arkansas, UCF, Texas, Texas A&M, Georgia Tech, Alabama and USC. He broke down each school: LSU: “I’m on call with the head coach [Will Wade], talking with him every day. If I were to go there, I would fit in their program because they run through their big guards, like they do with Trendon [Watford]. I see what they’re doing with him and how close he is to going to the league. That could be a possibility for me.” Florida: “They need an athletic wing and they’ve told me I could come in and play valuable minutes. I’m also close with the coaching staff. Georgia: “I see this a lot in the SEC, but they told me, like Florida, that they need an athletic wing. Coach [Tom] Crean has been telling me since day one that he’s been wanting to coach me. He’ll watch my game and point out the things I do wrong, how to correct that. He’ll also point out the things I do well and how I can improve and do better. Arkansas: “They do a great job of keeping in touch with me, coach [Corey] Williams, coach [Eric] Musselman. They call, make sure that I’m good, make sure that they’re still in the picture. Recruitment-wise, they’re doing their job. They’re doing what they’re supposed to. I feel like my development could take off of over there. Texas A&M: “I built a relationship with them early on. It’s to the point where they’re almost family to me. With the recruits, they’ve got Manny [Obaseki] and Jaxson [Robinson]. Coach Buzz, coach Johnson and them are all close with me. We talk basketball and we also talk about how to actually play the game. I’m real close with them. Development-wise, coach Buzz is all about getting better.” Alabama: “If I were to go there, I would do well because of the way they run their offense through their wings. They were showing me clips of how they get it up the court and finish above the rim. They play real fast. Coach Nate Oats said they need an athletic wing. UCF: “It’s crazy, they’ve been there for a while. They got one of my close friends, Isaiah Adams. They were at all of my games during the live period last year and the year before. They’ve been watching me for a while. They want me. Coach [Johnny] Dawkins said he could develop me to the next level. Coach [Kevin] Norris, coach [Vince] Taylor, coach [Robbie] Laing, they’ve all been in contact for like two years now.” Georgia Tech: “Coach [Josh] Pastner let me know they’re in need at my position. I could come in and play valuable minutes, play through my mistakes and learn as well. Texas: “Coach [Shaka] Smart, he let me know early that he wants to coach. He told me this the first time he talked to me, same with coach [Neill] Berry. They want to see me in that burnt orange. They let me know that if I were to go there and come in freshman year, I could play some valuable minutes because of who they have leaving. I could fill in that spot if I go there. USC: “My mom committed there when she was coming out of high school. She committed there, but she didn’t go. I’m real close with [Chris] Capko. He coached one of my trainers out here back at Marshall. He’s just been giving me pointers and tips on how I can improve my game and why USC could be a great fit for how I could improve my game. With coach [Andy] Enfield being a shooting coach, I feel like if I were to go there, my shot would improve and there would be a higher chance for me to get seen at that next level.” Fudge says he does not have a timetable yet for a decision. “Development for me is the key,” he said. “As far as recruitment-wise, just listening to what they have, what they have to offer. Knowing that they just extended the dead period to January 1, I’m just listening to them and seeing all the options they have to help me.” According to 247Sports.com, Fudge is ranked as the No. 10 small forward and No. 51 overall prospect in the Class of 2021. “I’m an athletic wing with a shot,” he said. “I have a quick first step so that allows me to get to the rim and finish. I defend the rim very well. I have a long wingspan so that helps me a lot on defense and I’m very active.” Follow Jacob Polacheck on Twitter Follow Adam Zagoria on Twitter Follow ZAGSBLOGHoops on Instagram And Like ZAGS on Facebook