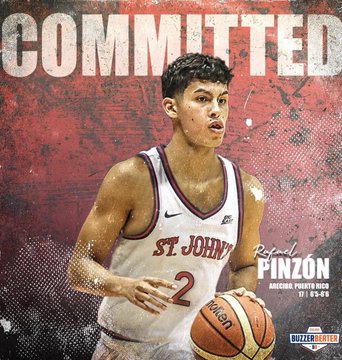 By JACOB POLACHECK Rafael Pinzon, the 6-foot-5, 175-pound shooting guard from Long Island (NY) Lutheran and the NY Jayhawks, announced his commitment to St. John’s on Monday, via Twitter. He broke down the deciding factors for ZAGSBLOG Monday. “The community, Drissa [Traore] who’s my teammate and classmate [is committed there] and the coaches gave me confidence,” Pinzon said by text. “I will stay in New York.” Ranked by 247Sports.com as the No. 33 shooting guard in the Class of 2021, Pinzon says he can play the 1-3 positions. “I can play and guard three positions,” he said. “They like to play fast and I like to score in transition.” Pinzon chose St. John’s over his other two finalists: Florida and New Mexico. “He’s a high-IQ guard who can fill it up from all three levels at 6-foot-6,” said Jayhawks director Jay David. “He’s great defensively and can guard 1-3.”

Pinzon joins his teammate from Long Island Lutheran, three-star forward Drissa Traore in the Red Storms’ 2021 class. “Rafael is a big-game player,” LuHi coach John Buck said. “He steps up when the lights are the brightest. He’s a talented playmaker, scorer, and defender who has his best basketball ahead of him. Coach [Mike] Anderson and the Johnnies got another great young man!” Follow Jacob Polacheck on Twitter Follow Adam Zagoria on Twitter Follow ZAGSBLOGHoops on Instagram And Like ZAGS on Facebook