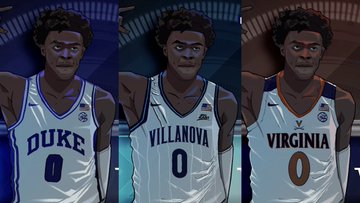 By JACOB POLACHECK Trevor Keels, the No. 2 shooting guard in the Class of 2021, has named a top three schools. Keels, the 6-foot-5, 210-pound shooting guard out Paul VI Catholic (VA) and Team Takeover, is down to Villanova, Virginia and Duke. Villanova currently has the No. 2 ranked recruiting class in 2021, per 247Sports with commitments from four-stars Trey Patterson, Nnanna Njoku, Jordan Longino and three-star point guard Angelo Brizzi. “They need guards,” Roland Keels said in May. “They have a class that will be senior-heavy. They potentially could lose a lot from either graduation or potentially going to the next level, so by 2021 I think Collin [Gillespie], I think he moves on. A couple of other guys have the opportunity of going to the next level. So they need a guard to come in and be ready to play.” Duke has the No. 13 ranked recruiting class in 2021, per 247Sports with two top-ten commitments in Paolo Banchero and A.J. Griffin. “Duke’s message is just coming in and showing what they have to offer,” Roland said. “The style of play fits Trevor’s game, letting him play a little freer. They think his game complements what they do.” Virginia is yet to land a commitment in the 2021 class, but the Cavaliers were recently included as an option for Top-40 prospect Trey Kaufman as he named his Top Five on Tuesday. “Virginia thinks that Trevor can fit their need,” Roland said. “They’re used to having big guards. They think Trevor fits the Malcolm Brogdon-Swiss Army knife. Someone that can play a little one, play a little two, catch and shoot. Versatility.” Follow Jacob Polacheck on Twitter Follow Adam Zagoria on Twitter Follow ZAGSBLOGHoops on Instagram And Like ZAGS on Facebook