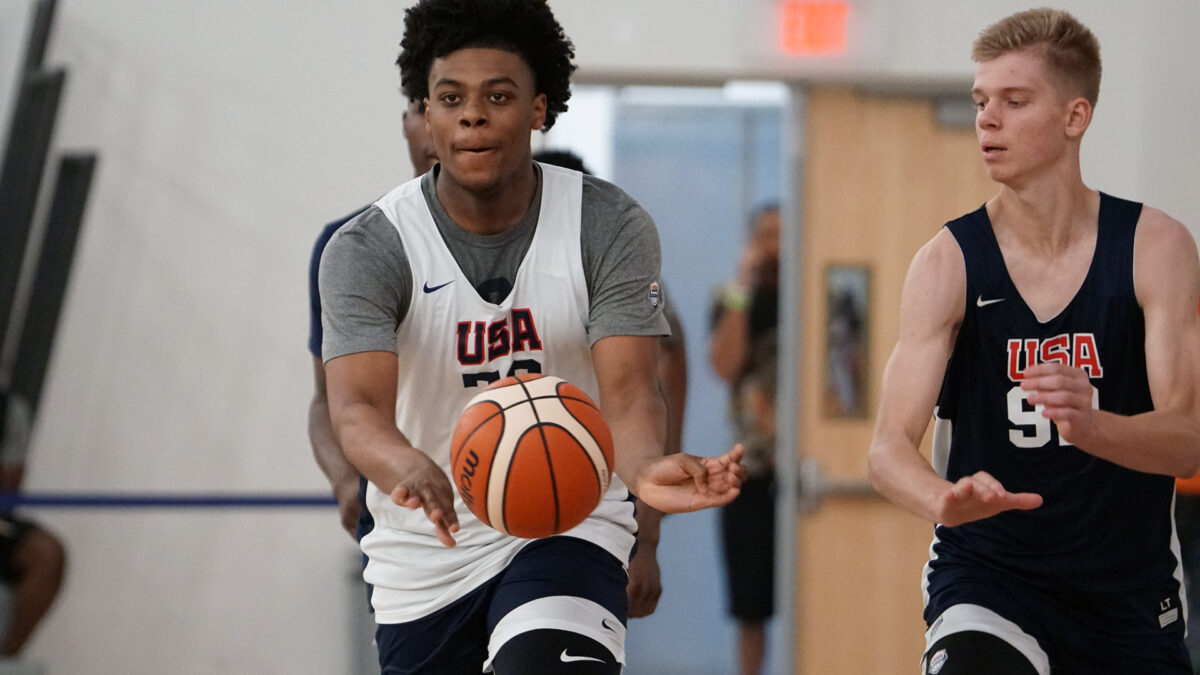 By ADAM ZAGORIA Trevor Keels, the 6-foot-5 guard from Paul VI Catholic (VA) and Team Takeover, has been conducting Zoom calls and hearing from a Who’s Who of high-major programs. Keels, ranked the No. 2 shooting guard in the Class of 2021 by 247Sports.com, has recently done Zoom calls with Duke, North Carolina, Georgetown, UConn, Louisville, Michigan, Villanova and Virginia. He’s in no rush to make a list. “I can’t even say that a list will even happen,” Roland Keels, Trevor’s father, said by phone. “Right now we’re just listening to everyone, getting to know these coaches and establishing a relationship.”

Roland broke down how several schools are pitching Trevor: Duke: “Duke’s message is just coming in and showing what they have to offer. The style of play fits Trevor’s game, letting him play a little freer. They think his game complements what they do.” North Carolina: “They think his game fits them. They need perimeter players, they need a shooter. They need a play-maker. They need perimeter guys and they think he fits the need they will have in 2021.” UConn: “UConn has a need for some guards. They have a need for a guard. They believe when it’s time for Trevor to get there, a couple of their guys [James Bouknight and Jalen Gaffney] have an opportunity to go to the next level. They need a guy that can come in and be ready to play.” Villanova: “They need guards. They have a class that will be senior-heavy. They potentially could lose a lot from either graduation or potentially going to the next level, so by 2021 I think Collin [Gillespie], I think he moves on. A couple of other guys have the opportunity of going to the next level. So they need a guard to come in and be ready to play.” Virginia: “Virginia thinks that Trevor can fit their need. They’re used to having big guards. They think Trevor fits the Malcolm Brogdon-Swiss Army knife. Someone that can play a little one, play a little two, catch and shoot. Versatility.” Georgetown: “Similar. Georgetown pitches home guys stay home. Same with Virginia. They really, really like Trevor. They like what he offers and they think they can help him grow his game.” Michigan: “They think the style of play fits them. A lot of ball screens, shooter. Two of his teammates [Hunter Dickinson and Terrance Williams] from AAU are there, but they really believe the style of play fits Trevor. And they’re really big on development.” Miami: “They preach the history of big guards, what they have done for them, how they have developed them and gotten them ready. They think Trevor can come in and have the opportunity to play.” Louisville: “They think Trevor fits their mold.” He added: “I can envision my son playing at all of these colleges and universities. They all have great coaches, they all do great things, so it’s just a matter of picking the right fit for Trevor and him feeling comfortable.” Keels is in no rush to make a decision because “I would like to get on campus and visit,” Roland said. They have already taken officials to Ohio State and Virginia and unofficials to Georgetown and Villanova. “We’re just really waiting to see what happens,” Roland said. Follow Adam Zagoria on Twitter And Like ZAGS on Facebook