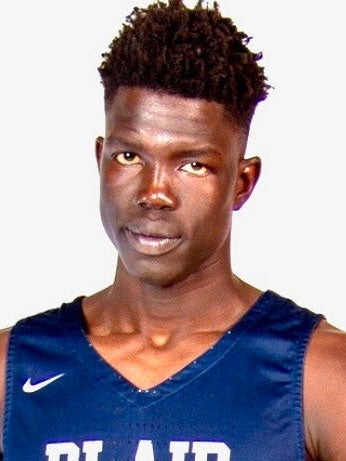 By JACOB POLACHECK Blair Academy (N.J) big Lual Manyang has only been playing basketball for three years, but in that time, he’s emerged as a high-major prospect in the Class of 2022. Manyang, a 6-foot-11, 206-pound center, currently holds offers from Bryant, UMass, George Mason, UNC Charlotte, NJIT, Saint Louis, La Salle and Manhattan. He is also receiving interest from Texas, West Virginia, Iona, Dayton, Elon. “The schools that have offered me are all in contact,” he said. “The schools with interest are waiting to come watch me play. They’ve just watched through highlights [and live streams].” Manyang spoke with West Virginia’s coaching staff on Sunday by phone. “They said they were going to get back to school soon, but they just wanted to check in,” he said. “If they are able to go back to school, I could come and watch them practice. They also asked me when I’m going back to school.” Manyang will be going back to Blair Academy on August 21. “They want international students to go back early so they can test them and set everything up for the studies,” he said. Manyang, originally from South Sudan, moved to the United States in 2018 prior to his freshman year. “As a young man who has only been playing basketball for three years and with NBA measurable’s and an incredible will to improve and compete, Lual Manyang may very well be, on a team of seven or eight future Division 1 players, our best long range prospect,” Blair Academy coach Joe Mantegna said by text. “He already shoots the three. He runs the court in incredible fashion for someone his size and he has a will to improve that I rarely see in young people.” Manyang started playing basketball in 2017, shortly before coming to the United States. “Growing up as a kid, basketball isn’t a big deal in my country. The famous sport is soccer,” he said. “I was playing soccer, but at the end of middle school, I started growing a lot, so it became harder. “I started to like basketball because it’s fun and there are less injuries. It’s a good sport for me because I’m strong and tall.” According to 247Sports.com, Manyang is rated as the No. 17 center and No. 142 overall player in the Class of 2022. “His story is incredible as both of his parents are deceased,” Mantegna said. “And he came to the states through a guardian who saw him playing for the first time on my new ball court which Luol Deng built in Juba South Sudan.” Manyang says he’s a ‘good shooter’ that ‘run the floor and handle the ball’. “I want to do everything on the court,” he said. “I’m not saying I’m a master at my handles, but dribbling the ball used to be a challenge and now I can do it well.” This summer, Manyang was originally set to play with the PSA Cardinals on the Nike EYBL Circuit before Nike canceled events for the remainder of 2020. “I actually do 200 pushups a day in the morning,” he said. “In the afternoon, I’ll work on my basketball. I start my workout with big man moves. I’ll also work on shooting off the dribble.” Manyang has also been studying the games of three NBA Superstars: Kevin Durant, Giannis Antetokounmpo and Kawhi Leonard. “From KD, I learned his crossover. He crosses right, then left, then shoots. He’s unpredictable,” he said. “Giannis has a great EuroStep, while Kawhi Leonard is a good defender that can shoot the mid range. I like his turnaround jump shot.” Follow Jacob on Twitter Follow Adam Zagoria on Twitter Follow ZAGSBLOGHoops on Instagram And Like ZAGS on Facebook