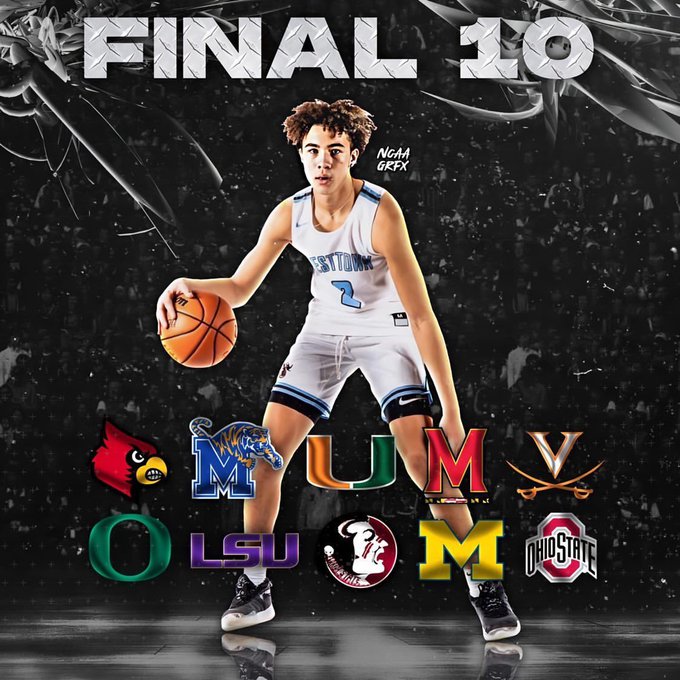 By JACOB POLACHECK Class of 2021 five-star combo guard Jalen Warley is set to announce his college decision on Sunday, August 9, he tweeted Friday. Warley, the 6-foot-4, 175-pound combo guard from Westtown (PA) and Team Durant AAU, is down to 10 schools: Memphis, Michigan, Florida State, Ohio State, Oregon, Louisville, Miami, LSU, Virginia and Maryland. He broke down his Top 10 for ZAGSBLOG last month: Memphis: “Penny [Hardaway] develops big guards really well and is able to show me the ropes because he played at the highest level.” Michigan: “I have a really good relationship with the staff and they have great people in their program.” Florida State: “FSU has a great staff and system for big guards.” Ohio State: “OSU has done great at developing big guards and also being national contenders on a yearly basis.” Oregon: “Oregon plays a fun style that really fits my game and the Pac-12 is a good conference for my style of play.” Louisville: “Louisville is a great system and is in need of guards to play right away.” Miami: “Miami has a great coaching staff that I have a great relationship with.” LSU: “LSU has a great style of play and is one of the best teams in the SEC.” Virginia: “Virginia does a great job at developing big guards. They are great at developing and competing on a yearly basis.” Maryland: “Maryland and I have great relationship. They have done really well with developing Philly players.” According to 247Sports.com, Warley is ranked as the No. 2 combo guard and No. 22 overall player in the Class of 2021. Follow Jacob on Twitter Follow Adam Zagoria on Twitter Follow ZAGSBLOGHoops on Instagram And Like ZAGS on Facebook