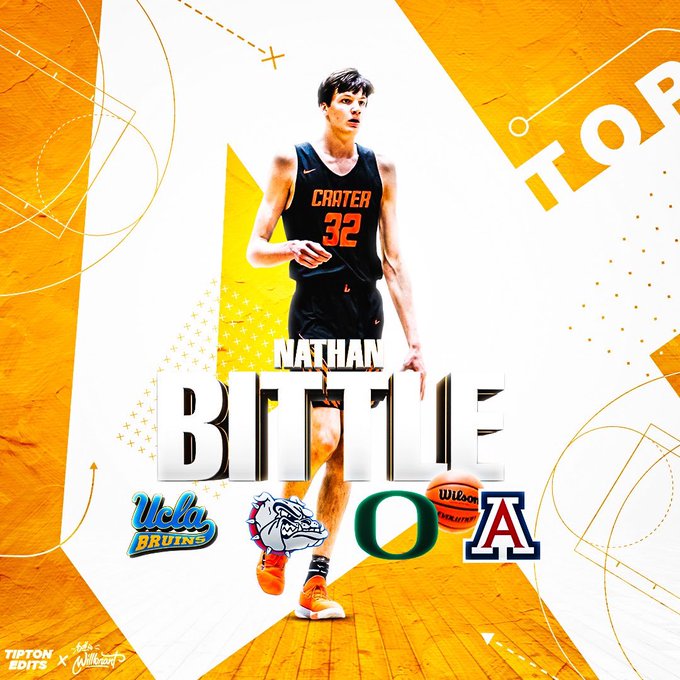 By JACOB POLACHECK Class of 2021 five-star center Nathan Bittle is down to four. Bittle, the 6-foot-10, 175-pound center from Crater (OR), named UCLA, Gonzaga, Oregon and Arizona as his final four schools on Friday, via Twitter. He has taken official visits to Arizona (Sept. 27), UCLA (Oct. 18) and Gonzaga (Jan. 24). “Arizona was great,” Bittle told ZAGSBLOG in December. “I loved the stadium. The fans at the Red and Blue Game were great and it would be a great place to play. Coach [Sean] Miller and his assistants were also great. “UCLA was just a great environment,” Bittle said. “Everything was nice. [The] coaches were great.” Bittle also broke down his thoughts on Oregon and Gonzaga for ZAGSBLOG in December: Oregon: “They are really interested and the coaching staff is great.” Gonzaga: “The coaches are great and have done a great job.” According to 247Sports.com, Bittle is ranked as the No. 2 center and No. 9 overall player in the Class of 2021. During the 2019-20 season, Bittle averaged 25.6 points, 11.3 rebounds and 4.5 blocks per game as a junior. Follow Jacob on Twitter Follow Adam Zagoria on Twitter Follow ZAGSBLOGHoops on Instagram And Like ZAGS on Facebook